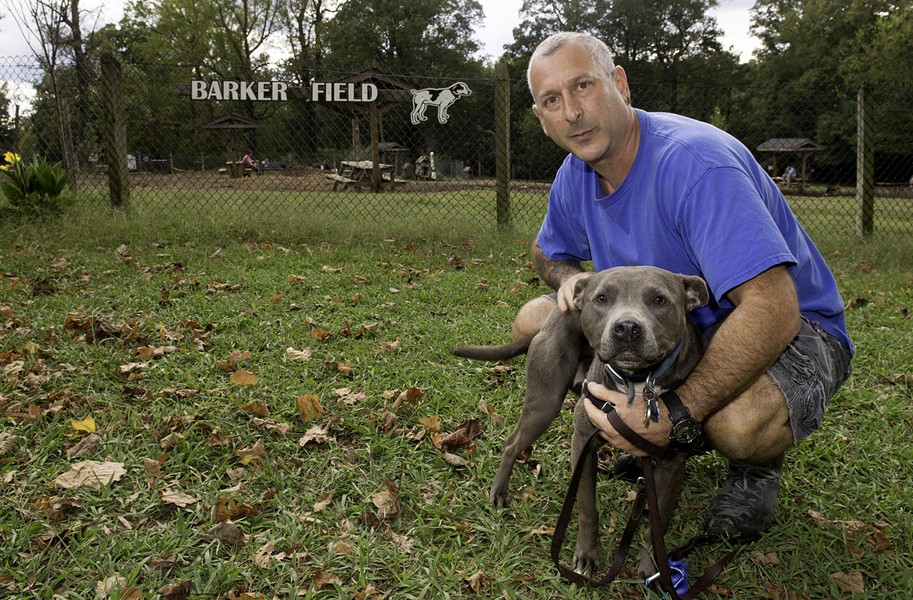 Scott Elmquist At the dog park in Byrd Park, David Bender says he was confronted about a change in age restrictions.

David Bender says he expected to hear barking when he took his daughter and their pet to the local dog park recently — just not from a human.

A year had passed since he last tried to go to the park with his daughter, who didn't meet the required age restriction of 8. He thought she'd be OK since she's 9. But the rule was changed to 12, and he says the same man who accosted him a year ago came at him again.

Bender says the man got in his face and started yelling that his daughter couldn't be there. Things got so intense that someone must have called police — or they took notice. Before officers arrived, Bender says, "It's already escalating beyond the ridiculous and the sublime."

After a responding police officer said the department couldn't enforce the dog-park regulation, Bender and the group making the rules have waged a publicity war airing their views.

The Friends of Barker Field, a nonprofit board that manages the city-owned land, has ramped up efforts to let people know that children younger than 12 aren't welcome, while parents continue to challenge the restriction.

"We're trying not to be asses about this," Friends of Barker Field President Brett Hill says. But the dog-kennel owner says he's seen too many injuries for the park to be considered safe for children and dogs to mix.

"We've had three grown people I know of with broken bones — one with two broken legs," he says. "What if that was a small child?"

Hill has since confirmed the police are responsible for enforcing the park's rules.

Bender hopes to rally public opinion to get them changed. "It's arbitrary and capricious, put in by a nanny state," he says of the tightening restrictions. "I am a good and responsible parent. I'm not going to put my child in danger."

Hill says the park continues to confront dog owners with young children in tow "300 out of 365 days a year," saying he's even seen bassinets left on tables.

"For a lack of a better word, they're not educated about what can happen," Hill says. "It's different having a child and dog, and having 20 dogs ranging from five to 200 pounds running in circles getting wound up. I've been bitten myself four times."

And while Hill says there was no reason for Bender to be addressed aggressively, the rules must be followed.

Bender says he won't be going back.