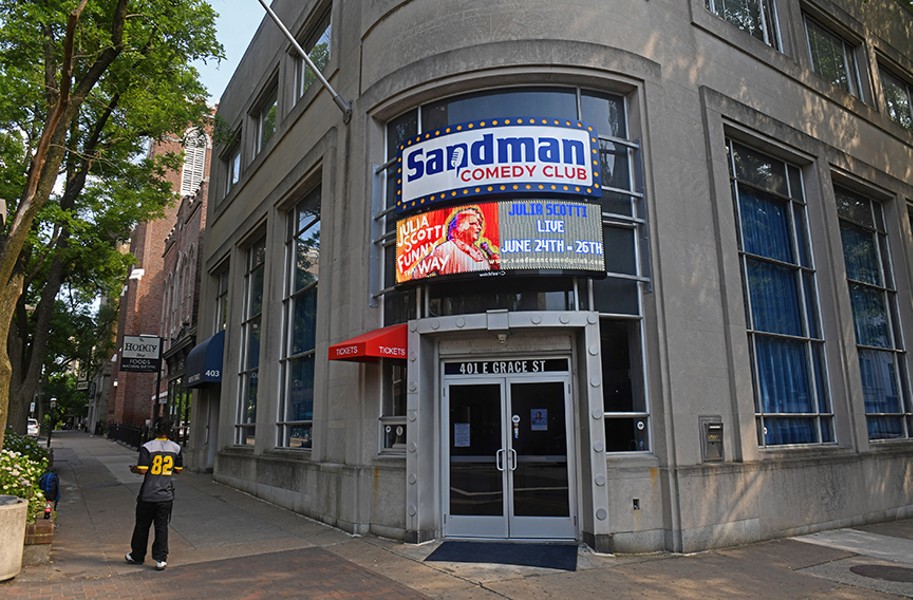 After one heck of a lousy year, we all deserve a good belly laugh.

That’s something Michael and Carrie Sands hope to deliver to the River City with their new comedy spot, Sandman, downtown in the former Champion Brewing location.

“There is nothing better than laughing and having fun, no matter how old or young you are,” Michael says. “We need more laughing and less fighting in this world.”

Originally from Wisconsin, the Sandses have only been in Richmond a little over a year, but have already fallen in love with it. Like many folks, they took the opportunity in lockdown to explore the country by RV. The stop here would be a formative one.

“At some point, you say we can’t do this forever – now what?” Michael says.

The couple toyed with the idea of a bar with some comedy nights and agreed they didn’t want the hassle of being open every night of the week as a bar. “We get to host a show for a few hours and then go home,” he says.

After perusing commercial real estate listings for a bit, the two spotted the place they now call Sandman’s home.

“As soon as we saw this space, we just said: ‘This is it.’ It’s like when you buy a used home. You have to see the potential, not what’s there right now,” he says.

The married couple of 30 years went to a comedy club on their first date, and the two are mega funny fans, so it’s a fitting venture. The pair started the journey in January of 2020, then the bottom dropped out and after multiple delays, before opening last month with a gig by Vanessa Mitchell and Matt Wright.

This is a big-ass comedy club, folks. It’s unparalleled by anything we’ve seen downtown in years, specifically aimed to snag top-notch touring comics and foster local talent as well. Most recently Champion Brewing, the Sandman optimizes a massive space that used to be a bank. Michael explains that the bank’s super-secure infrastructure posed challenges as they began a massive remodel effort.

“There was so much cement. These massive concrete slabs and steel plates. It was actually built in 1948 so it doubled as a fallout shelter at one point,” Michael explains. “We did keep the vault though for liquor storage. People can check it out on the way to the bathroom.”

Right now, the club has shows Thursdays through Saturdays and no-cover, open-mic nights and karaoke on Sundays. As post-pandemic touring kicks up, it expects a chock-full schedule with bigger names such as Whitney Cummings, who is tentative for August.

“We’re looking at a diverse lineup. We want all ages, races, everything,” Michael says. “We let local comics emcee the show to show hometown support.”

And they’re open to a variety of shows. A local theater group is floating the idea the space for rehearsals and a few drag brunches are planned as well. Nothing is really off limits, as Michael notes, “ I have a bodybuilder competition coming to see the space next week.”

While currently operating under coronavirus distancing rules, the Sandses say they look forward to packing all the seats soon, in the ballpark of 250. There’s really not a bad view to be had on any of their three levels, and multiple screens ensure you’ll never miss a beat, even en route to the restroom where there’s sound as well. The AV system is top-of-the-line and can professionally live stream and record shows.

“Comedy is our focus, but when we built this, we wanted to keep every kind of event in mind,” he adds. “So, a band can plug into our system, for example, like any other venue.”

The food solid is pub fare. From homemade staples like burgers and hand-cut fries to lamb birrias tacos and the Wisconsin beer brat, chef Dee Campbell has made sure there’s something for every palate on the curated menu, vegetarians included: There’s a dedicated fryer for those eats. And what’s a comedy spot without some booze? Imbibers will delight in a full menu of bevvies including specialty cocktails and mocktails, local draft brews and canned standbys like White Claw – every group of friends has that one person, c’mon.

The Sandses say for both entertainers and guests alike, one thing holds true - they want you to feel like family and very much at home. The talent has all their food and drinks comped and they get hooked up at the Hilton so they can walk to the show.

“I try to treat them like I’d want to be treated,” Michael says.

The same can be said about their new digs in Richmond.

“People want things downtown. They want to walk to things,” Carrie says. “We hope being here can be a draw that helps other places down here grow too.”