Scott Elmquist Tabol Brewing will open in North Side later this summer.

Richmond's next brewery will not only fit a different niche in the local market, one of its main ingredients will hail from local sources.

Tabol Brewing partners Nic Caudle and Travis Dise will focus on rustic beers — wild, funky, sour and tart — made in large part with various yeast and micro-biota harvested in Richmond. Rather than the shiny stainless-steel vessels that fill other area breweries, the production area at Tabol is stocked with wine and bourbon barrels for fermenting, conditioning and aging.

Caudle will harvest many of the micro-organisms used for brewing and buy some yeast and bacteria. He says he harvested his first batch of yeast as a homebrewer on a whim and liked the results.

"There's a whole gamut of flavors you can play with that aren't necessarily available commercially," he says.

Some of Caudle's harvests will appear in Tabol beers, and there's more wild micro-biota in the works.

"I've got four or five test jars going of various things we've found just in this North Side area," he says. "We're hopeful on a couple of them."

Similarly, open-air coolships, like at the Veil, also utilize the wild yeast and bacteria perpetually floating in the air.

Sours and other wild, funky beers have certainly gained popularity recently, but not many Virginia breweries have made them the central focus.

Some of the brews will utilize aged hops, a common practice in Belgian styles like lambic beers since they minimize hop aroma and flavor while still providing a preservative effect.

Fresh local fruits like raspberries and blackberries from Agriberry Farm in Hanover County, which come with their own set of micro-biota, will make their way into some beers. The menu will be sour-heavy, but the owners don't intend to use the popular method of kettle souring, which is quick and results in bright, tart beers like gose and Berliner weisse.

"The wild stuff's just more fun," Dise says. "There's so much more variance. You just don't know what you're going to get."

Which, Caudle says, is good and bad. Each beer offers a different flavor profile, he says, and even Tabol doesn't release one on its own. The brewery may use it as a good blend component with something else. 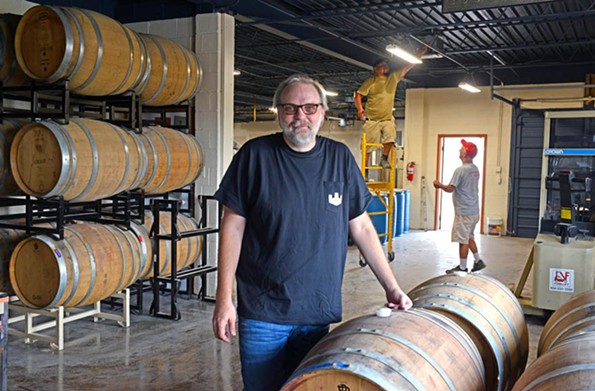 Besides the funky and acidic wild beers, Tabol's taps will pour "clean" beers, made in a separate fermentation room.

"We'll make a little bit of most everything. What most breweries do for a side project will be our main focus. And most breweries' mainstay beers will be our side project," Caudle says. "We'll probably have a hoppy beer. We have plans for porters and stouts and barley wines. We'll have our own spin on them, too."

Rather than boxing their offerings into specific styles, though, Caudle says it will use descriptors instead.

Having received all the necessary permits, Caudle and Dise have begun brewing and fermenting wild ales, gradually filling barrels in their five-barrel system. Mixed-culture beers take longer to finish, at least eight to 10 weeks and sometimes even months or years, compared to two-week fermentation for clean beers.

Before they can open to the public, they must finalize their large tasting room and large deck, which they're hoping will happen by late August.

Customers will need to go to the brewery to get their hands on Tabol beer — the partners have no distribution plans for the near future.

"Right now, it's a pretty crowded space out there," Dise says. "You can see with other breweries, it's definitely not necessary to put packages on shelves to be successful."