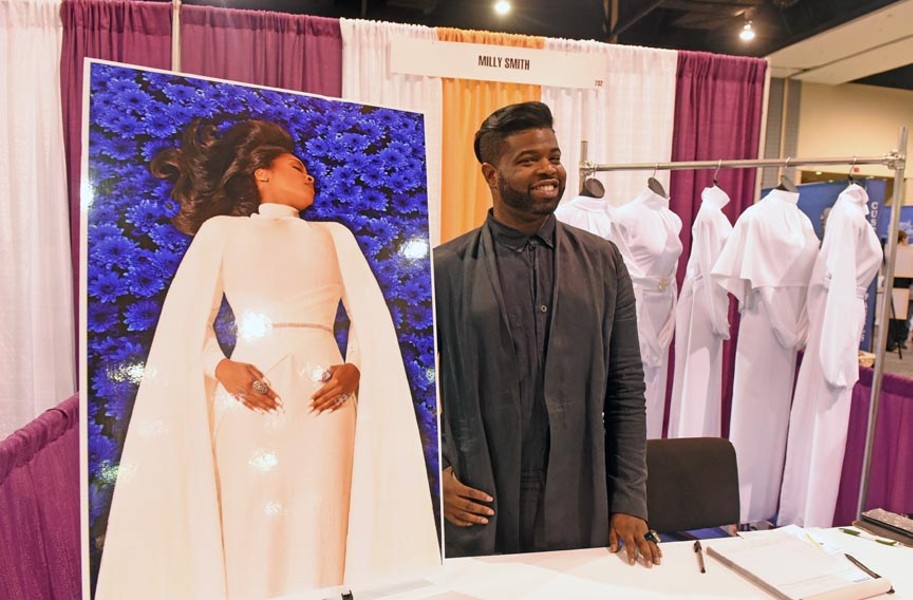 Luxury hearses, colorful coffins and urns of every design are for sale. But inside the Greater Richmond Convention Center, the vendors bustling with business are the ones who wield measuring tapes on living clients.

More than 1,200 directors, morticians, embalmers and exhibitors were downtown for the National Funeral Directors & Morticians Association’s annual conference, and sartorial choices were a serious business.

“These guys are all over the place in their style,” he says. “They’re in suits, but it’s not your basic navy blues and grays, white shirts and conservative tie. It’s stylish and urban, not corporate.”

Battie says he’s been in the menswear industry for 46 years, and the five funeral conventions he attends each year account for much of his business.

Michael Sahi of Michael’s Custom Clothes is a wardrobe consultant in California. “There’s two kinds of people in this conference,” he says. “One is really out there: four-button, five-button suits, tab on the pants, pleats on the shoulders, cufflinks.”
He credits the style to actor Cary Grant, but mentions comedian Steve Harvey as popularizing the look more recently.

This is Sahi’s 12th funeral directors conference, and he says he’s barely had a moment without a client.

Not all booths cater to the living. Anthony Williams has a line of burial gowns, Milly Smith, named after a cousin who died.

“When I looked at the market for burial dresses, I was like, ‘Oh god, no,’” he says. “A lot of the pre-existing dresses are old and antiquated, so I created a line of dresses that were modern and chic and speak to today’s woman.”

This is his first convention. “I come from a generation that doesn’t believe we’re going to die. So we have no level of preparation,” says Williams, who appeared on the seventh season of “Project Runway.”

His long, white gowns have such names as the Whitney and the Audrey. “I wanted to maintain that classic vintage feel,” Williams says. “Sometimes when people are bereaved, it’s difficult to select what a person’s going to wear. My product takes some of the weight off.”