Local pop-punk group Fun Size is back with a new record and old friendships. 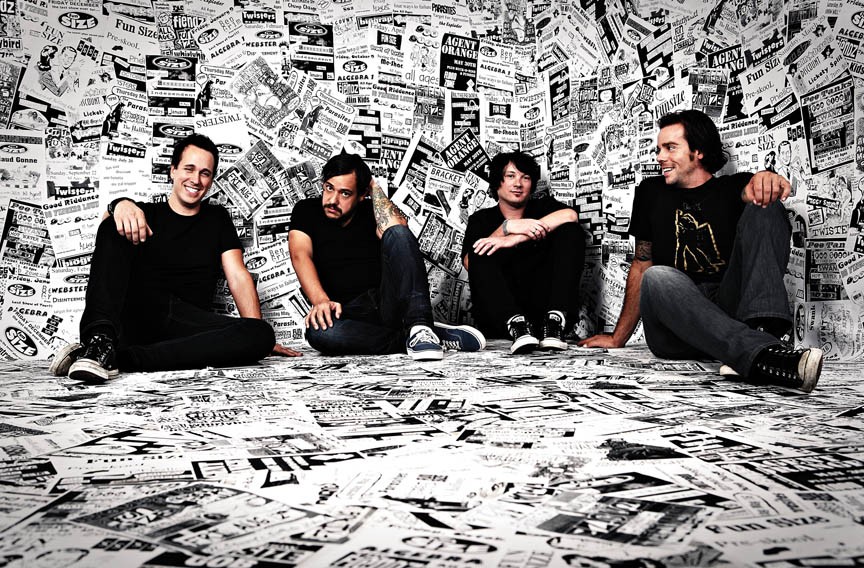 It's been 15 years since the demise of Richmond pop punkers Fun Size, but this week the band comes together again, promising to pick up where it left off — playing energetic and fun melodic pop punk.

Fun Size started in 1991, when Menefee and Skillman, as bored kids living in the South Side, met Owen after building a half-pipe skateboarding ramp in Menefee's backyard. "We had no idea what we were doing or even that this could take us somewhere," Owen says. "We didn't think like that. It was just fun."

They didn't even know how to tune a guitar, Menefee says. "I tried to show Brian what I had read in a book about tuning a guitar, but he was afraid I would mess up the way he had it," he recalls. "Our early practices were rather cacophonous. I guess this explains why each parent would evict us every two months from their respective garages."

Band members had no one to teach them about being a band and had to learn everything on their own — from writing songs, to playing shows, to recording in the studio. During the next few years, Menefee, Skillman and Owen, along with original guitarist Orice Collins, grew up as a band while they were growing into young adults.

Their progress kept them motivated. "Because we learned everything together," Menefee says, "each year in our band felt like an achievement. Everything was a milestone. Everything was a bigger deal and had more substance and levity."

The band released two albums, "Pop Secret" and "Glad to See You're Not Dead," started touring and began getting a substantial amount of attention, notably from ska rockers Less Than Jake. This led to being a part of the just-starting Fueled by Ramen record label and cross-country tours. As life grew more complicated, band members began drifting apart, and ultimately the band decided it was time to move on.

"When we reached the level where we were actually drawing people to shows, released a couple CDs and attracted some attention, we weren't prepared for what that entailed," Menefee says. "We needed someone to help us through that treacherous portion, but we didn't have anyone, and we just imploded."

Fun Size played a final show for its legion of fans at Twisters in December 1998, after which the members went their separate ways. After a reunion show nearly a decade later, in May 2008, the band started feeling the itch to play as a group again. When Owen moved back to Richmond, that itch needed to be scratched.

"When I told James and Allen I was moving back, they said that maybe we should try to do something with Fun Size again," Owen says. "So, I thought why not? We should go for it. Let's do it for old time's sake."

Menefee says fans can people expect a more grown-up sound on the new record but should keep the memories of the old days intact.

"There is a consensus in the arts that work is never actually finished," Menefee says. "I'm really proud of what we accomplished as kids and am equally as proud of this new record, but I think a lot of things were left unsaid as far as our band's songs when we were younger, so this record addresses that."

After its release show, Fun Size plans to stick around, but will take things one step at a time.

"We started the band to make music, have fun and go on adventures together," Owen says. "As long as we don't lose sight of those things, we will just take it as far as we can. That's the point of it all, isn't it? It's not really about money. Who makes money playing music anyway? Not many people! I think I've made about $3.75 so far."

"I'm hoping the plan is to play some more shows, do some touring and see what opportunities arise," Aida says. "I plan on sticking around as long as there's something to be done."

The best part about Fun Size, according to each member, was being in a band with their best friends and growing up together. They wouldn't trade that for anything.

"I remember looking over at Brian during our last show in 1998 while we were playing and thinking, 'Look how far we came,'" Menefee says. "I get to look over at Brian now and play the same song on the same stage and think: 'We're still friends? Amazing.' I hope I get to keep reliving that feeling as long as possible." S

Fun Size releases its new record, "Since Last We Spoke," at Strange Matter with Six Track Amateur and Volunteer on Saturday, April 6 at 9 p.m. $5-$7.