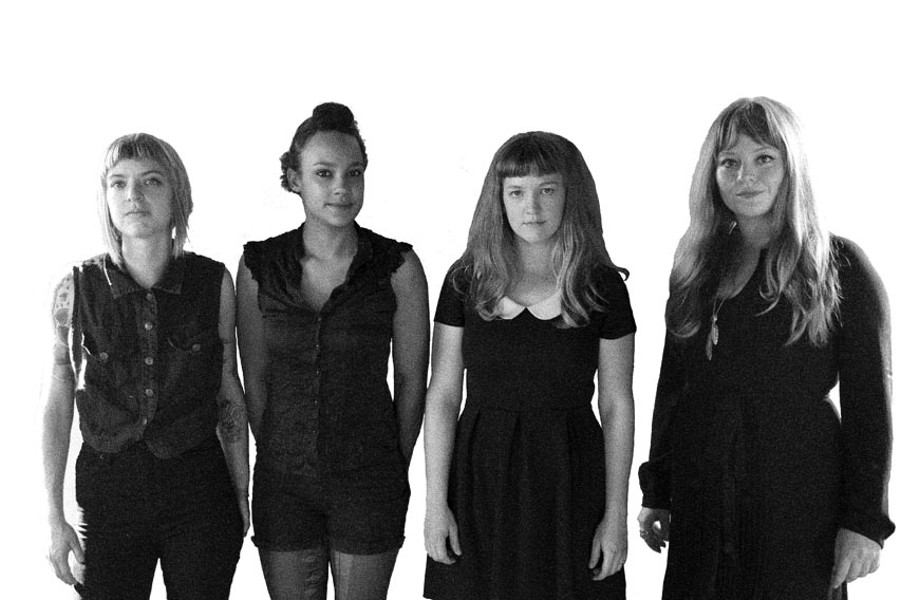 The ladies of Christi are bassist and vocalist Maggie Yokley, guitarists Emily Webster and Sarah Regis, and drummer Patty Conway. The members have been strong proponents for Girls Rock RVA music camp.

The members of Christi don’t need your help. They’ll use their own band equipment and lug it into the venue themselves, thank you very much.

Oh, and this four-piece might melt your face off when they get started.

Just as much Slant 6 and Protex as the Shangri-Las, Christi is one of Richmond’s only all-female bands — and certainly the most visible one at the moment. Oscillating between ebullient rock ’n’ roll and scruffy punk, Christi is a refreshing, whip-smart outfit bringing much needed balance to the local scene. It’s a scene where the disparity between the treatment of male and female bands can still be staggering at times, they say.

“I’ve had to be a lot more humble and kiss a lot more ass than a male musician,” says bass player and vocalist Maggie Yokley.

“People try to screw you left and right on the most basic kinds of things,” adds drummer Patty Conway, who also plays with garage rockers the Ar-Kaics. “A lot of negotiation happens to get things like guest list spots that would just be a given with my other band. I get aggressive because I know that if you give them an inch, they’ll take a mile.”

Hailing from parts of Virginia, North Carolina and New York, the band members were brought together by mutual friends and a love of live shows.

“Our old drummer, who was also friends with [Emily Webster], took me to a show that [Sarah Regis] was playing,” Yokley says. “It was the first time I hadn’t seen four white dudes after four white dudes in a punk lineup.”

Following that show, the two became co-workers and killed time talking about bands and song ideas — and, of course, coming up with their own name.

“A girl we worked with was supposed to be in our band but was kinda flaky,” Yokley adds. “Whenever one of us would flake out on something we’d call each other Christi.”

After an informal practice at a punk house in Church Hill where Yokley and Regis were living, the band was official. Conway joined the lineup a year and a half later. “Ar-Kaics thought Christi was the best band in town,” Conway says, “so we were always trying to play with them.”

To date the group has turned out an eight-song cassette and a 7-inch featuring “Cry” and “Get You Off My Mind,” produced by Bob Quirk in exchange for a small amount of money and vegan snacks. “He’s super respectful and understands what we want,” Yokley says. For now, a full-length isn’t the focus.

Their major goal is playing more out of town shows and inspiring the next generation of players. Everyone in Christi volunteers with GirlsRock RVA and the band has been invited to play Ladyfest Baltimore at the end of May.

“Growing up when I said I wanted to take guitar lessons, I was told I should play piano,” Yokley says. “Representation matters. I would never have tried to start a band if I hadn’t gone to that one show where I saw women playing.”

Christi plays at Hardywood Park Craft Brewery on May 9 to benefit the film collective Good Day RVA. The show is free for all ages.