VMFA director Alex Nyerges steps out with a photography show that reveals his 40-year fascination with light. 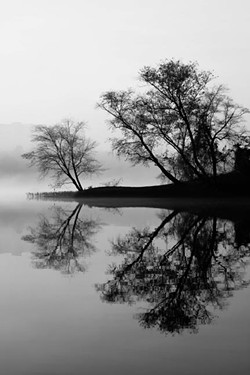 It took Alex Nyerges only four decades to get a solo photography show. And even that wouldn’t have happened if his wife, Kathryn, hadn’t insisted that he start showing his work to somebody six years ago.

Nyerges acquiesced, submitting to exhibitions and competitions, but his driving force was personal: It gave him a real reason to print his photographs.

Glave Kocen Gallery provides the setting for “Alex Nyerges: Chasing the Light,” a collection of more than 40 photographs shot worldwide. A black and white image of a streetscape in Baltimore’s Fell’s Point shows a lone figure walking down a narrow street under a tangle of power lines. But it’s the contrast of light and dark that grabs the viewer.

“I think of myself as a photographer of light and shadow,” Nyerges says from a sunny perch at the Virginia Museum of Fine Arts, where his day job is that of director. “I see in black and white, been seeing in black and white forever. It’s about the form, all about the dynamics of what I see in the natural world and the built world. I love to think and see in the abstract so people look and wonder, ‘What is that?’”

An early riser, Nyerges uses the time between 4 and 8:30 a.m. to work on his photography, write and read blogs. Printing his photographs is an almost daily ritual, one he appreciates for its sense of productivity, he says: “All I do is what I could’ve done in a darkroom. I tried Photoshop years ago and it was way above my pay grade and technical abilities.”

Every other day or so, he grabs his camera and goes for an early run, usually down by the river. “The problem with running is that I see so many pictures that halt the run,” he says, laughing. “It’s all about the angle of light. Darkness has a meaning and a power to it.”

Although he once sneered at the notion of digital photography, he crossed the digital divide in 2003 and seven years ago began allowing figures to crop up in his photographs, something he’d assiduously avoided until that point. He calls them incidental portraits, noting that people were different from his prior subject matter: “I’ve had fun shooting people. They add dimension to a landscape from a scale standpoint and a humanity standpoint.”

The exhibit is a mix of peopled photographs and found moments and objects, spanning years of picture-taking. Proceeds from the sale of the work will be donated to the museum. He acknowledges two levels of excitement about the show: Seeing his work matted and framed provides inspiration to do more, but also the satisfaction of revealing to the world that he’s been doing this for more than 40 years.

“My hope is simple for this show. I hope people enjoy what they see and use it as inspiration to really see the world around them,” he says. “We pass by these things, we drive by and we don’t pause. I hope people get out of their cars and enjoy the visual beauty that surrounds us all.” S