From the Attic to the Moon

With Spacebomb, Matt White searches for that elusive Southern groove. 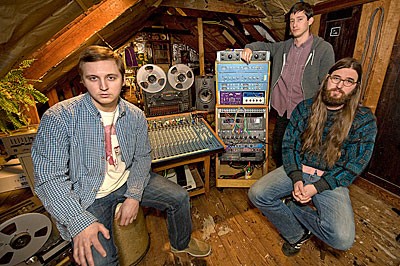 Launching a record label is the natural next step for Fight the Big Bull guitarist and leader Matt White; he may never have a better opportunity than on the Richmond band's current flood tide of success.

The Big Bull's two 2010 releases — “All Is Gladness in the Kingdom (Clean Feed)” and its collaboration with David Karsten Daniels, “I Mean to Live Here Still” — landed on numerous Top 10 lists.AÿThe New York Times' Ben Ratliff gushed over one of the band's New York performances, and its mid-September “Sounds of the South” concerts with Megafaun generated waves of coverage online.Aÿ

Putting Richmond on the map has been White's long-term project.Aÿ“We've been successful bringing in outside talent,” the guitarist and composer told Style Weekly in January 2006. “But in order for Richmond to grow, we need to export Richmond products. We want to be a source, a legitimate artistic community — not just a stop on the tour.”

White's original vehicle was the Patchwork Collective, a genre-mash-up arts organization co-founded with Glows in the Dark leader Scott Burton and Chris Elford who since departed for Manhattan. The echoes of that initiative to build Richmond audiences and retain local talent still reverberate.

White's restrained musical direction and generosity with the spotlight — he seldom takes a solo — have always given Fight the Big Bull a strong communal feel.Aÿ Now, inspired by a visit to the Oxford, Miss.-based blues label Fat Possum Records, and flush with cash from the “Sound of the South” gig, and building on the energy of the last year's success, White says it's time to make an individual move. “There are a lot of things I want to do musically that I can't do with Fight the Big Bull,” he says.Aÿ“And if I do them, who will put all these records out?”

Spacebomb Records (named after White's attic studio) — is envisioned as a reboot of the time when a distinctive record label — like Motown, Stax, Blue Note — was as important to the sound as the artists it recorded.AÿThe plan is to have a Spacebomb house rhythm section — White on guitar, with Big Bull cohorts Cameron Ralston on bass and Pinson Chanselle on drums — augmented by a rich network of collaborators on the local scene.AÿWhite says he's studied not only the techniques but also the mindset of the classic labels, understanding how to organically create a great record in seven days rather than technologically assembling it over six months. “We'll do all kinds of music,” White says — “jazz, rock, folk, with either hands-off or hands on production.AÿThe goal is total freedom, but also financial success.”

White has enlisted longtime friends for the business side of the Spacebomb initiative. Jesse Mendaries is in charge of administration, and Matt Rawls, moving from Tidewater to a house a few doors down from White's, will handle the legal side. RVAJazz blog founder Dean Christensen (calling himself “outreach director”) is leading marketing, publicity, social media and some booking.Aÿ“I have always looked up to Matt,” Christensen says.Aÿ“The writing on RVAJazz was highly influenced by Fight the Big Bull's success, and the production we've done was inspired by Patchwork.AÿFor him to include me on this new venture means a lot.AÿI have to be involved with this.”

A number of projects are in the pipeline for the fledgling company, starting with a CD recorded with indie-folk rocker Karl Blau, solo records for each of the members of Megafaun, and another disc for Chicago avant-jazz bass clarinetist Jason Stein. And White has his own solo album in the works.AÿIn parallel with the recording activity, Spacebomb will be curate biweekly shows at Balliceaux featuring both out-of-town guests (starting with Blau at the label launch Feb. 16) and ongoing juxtapositions of new and established Richmond groups.

For Matt White, this new label isn't just an opportunity, but a mission.Aÿ“We've lost the American music voice,” he says, “that true Southern R&B-Stax-Motown groove.” In Richmond, he says, the talent is high, the costs are low, and you can make a big record that you just couldn't make anywhere else. That's what's attracting musicians here, and that's how he plans to finally break out.