From Romania With Love 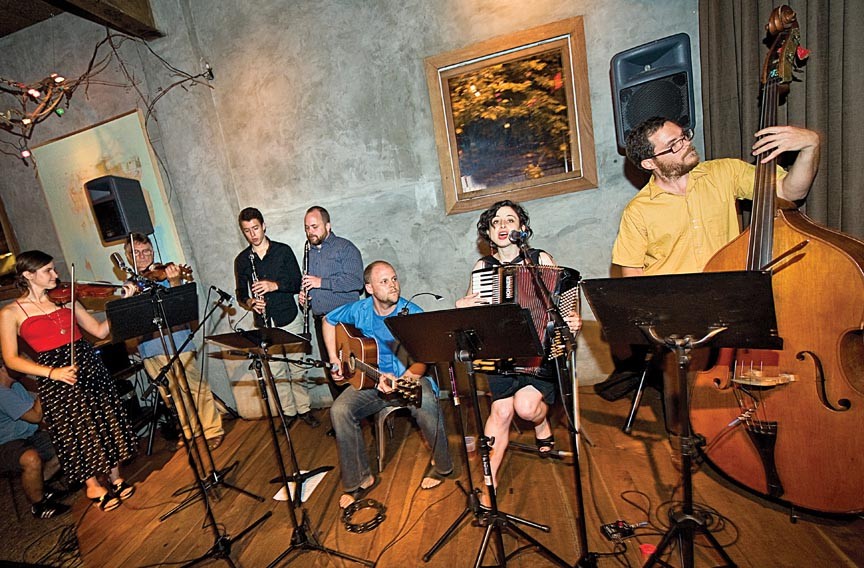 The back room at Balliceaux is filled with complimentary cups of Kool-Aid-red borscht. No, we aren't all about to lie down and sleep until the comet arrives — but everyone here is ready to join the cult of Romanian folk music.

The occasion is a CD release party for "World, Sister World," one of the most unusual local recordings of the year. It's a six-song EP from the Richmanian Ramblers, a group of local musicians performing traditional Romanian songs popularized by celebrated singer Maria Tanase. Revered in the 1930s and '40s as that country's version of French torch singer Edith Piaf, Tanase interpreted peasant songs from the countryside. Her work later was banned by the fascist Iron Guard for taking liberties with tradition (though some speculated it really was because of her Jewish friends). She died in 1963.

When the Ramblers' hour-long set begins, much of the crowd appears momentarily stunned — and not just by the Romanian lyrics. A strange "Lawrence Welk Show" meets "Portlandia" vibe permeates the dimly lighted room. A few expressions seem to say: "Am I really at a Fan bar in Richmond? What does Facebook's location finder have to say about this?" Someone burps beet soup. Conversations resume.

No one, however, can ignore the lovely vocals emanating from soprano Antonia Vassar, an accordion player in a black dress seated center stage. Perhaps best known for working with her husband in the indie-folk band Jonathan Vassar and the Speckled Bird (which also just released a new album), Vassar's high coloratura range adds soaring, baroque drama.

"I had to learn each song phonetically line by line," Vassar says later. She took classes on singing in other languages during her classical training at Virginia Commonwealth University, where she studied with L. Wayne Batty. It was the music that attracted her to this project, she says: "The songs were all so sad and funny and heartbreakingly beautiful."

The group also contains two fiddles, a clarinet, an acoustic guitar, a string bass and percussion, played by local players from Fight the Big Bull, the Hot Seats, Ilad and the Moonbees, among others. None of the players is Romanian nor has visited the country.

Tonight, the band alternates between quiet ballads and working the crowd with dance numbers such as "Ciuleandra," with its crowd refrain "sha-Sha-sha-Sha!" A waltz, "Bun II Vinul," considered a racy drinking song by some in Romania, closes with the translated lyrics: "Great is wine and tasteful as well / when you drink it with handsome people / But if you drink it with ugly people / the wine gets stuck in your throat."

The Ramblers formed last year under the guidance of bassist Nate Mathews — his parents made the borscht — and clarinetist Jason Scott. They were inspired by seeing Balkan music performed at the Richmond Folk Festival. The band first played at a fundraising event for Romania Reborn, a Christian organization that raises money for Romanian refugees. Part of the proceeds from the new CD also will go to the charity.

Matthews selects most of the songs and writes the arrangements. He never worried much about cultural appropriation, he says, because they're being honest about their personalized approach. The fiddles here, for instance, are played with a more expressive, American folk style. "Our vision doesn't revolve around an imitation of an authentic style," Mathews says. "We're a rotating cast that allows our own musical story to create a loose, improvisatory experience."

He did learn early on that the term gypsy shouldn't be used lightly. "It's a cuss word, almost, for people from there," he says. "We can't just throw that around lightly — it's almost exploitive to say we're playing gypsy music."

The album was recorded last February with RVA Studios at a former movie palace, the Bellevue Theater, an oddly charming — some say haunted — 1930s building used by Shriners in Richmond's North Side. The heat wasn't working, but the natural acoustics were. "It was colder in the room than it was in the capital of Romania that day — we checked," Vassar recalls. "The cavernous room really added to that live feeling on the album."

Looking forward, the Ramblers plan to incorporate more Eastern European and Balkan styles into their repertoire while inviting other musicians who share their interest to sit in. They're searching for Hungarian songs now.

For local music lovers who occasionally crave something different, this is good news. As filmmaker Jean-Luc Godard once said, "It's not where you take things from, it's where you take them to." S