From Miami Beach to Mango

After years of cheap cuts, a writer offers her head to Vidal Sassoon's style gods. 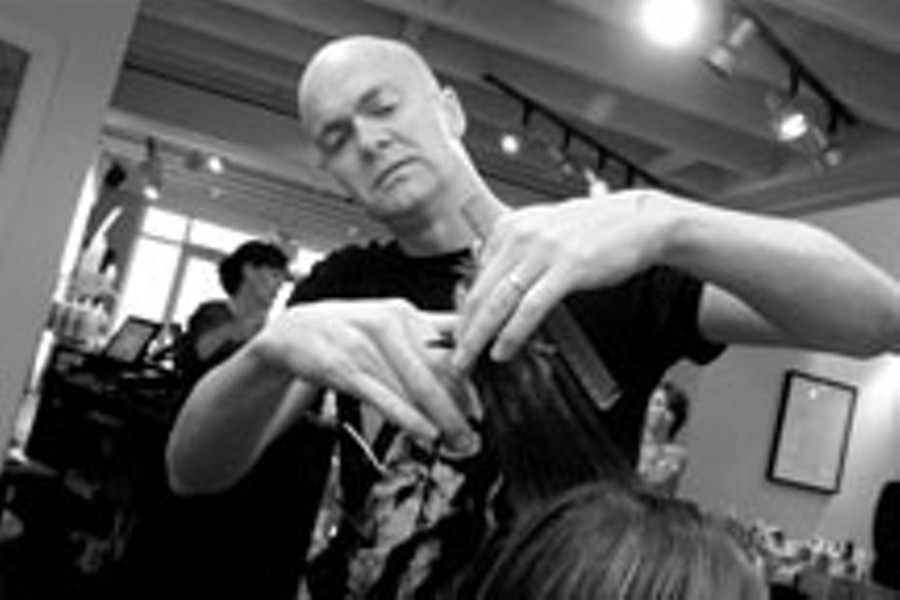 From my 20s until recently, I've opted for the cheapest of cheap salons. I've had my hair fried by chain-salon amateurs who left the permanent stuff on too long. Hair stylists have gasped at the work of other hair stylists ("Was she drunk?"), and I've had to go for corrective trimming following the more unfortunate cuts, usually for the low, low price of $10 or less.

When a friend told me that Mango, a stylish West End salon, had a slot open for a model in a special training session with a Vidal Sassoon professional, I balked. But I was curious about what a bona-fide hair expert might produce, so I agreed to sit in the chair after being reassured that I would not emerge with a reverse Mohawk.

Arriving at Mango at 10 a.m. on a recent Monday, I was offered refreshments, shampooed and seated at one of eight stations where models were awaiting their metamorphoses. My stylist, Abby, would be doing the actual snipping at the direction of Melvyn. Abby, a stylist with 24 years of experience, was friendly and good-natured about taking direction every step of the way. She explained that the Sassoon way involves no round brushes, no razors or texturing shears.

Sporting Levis and a black T-shirt with a pink likeness of Debbie Harry, Melvyn first made the rounds examining each model's hair and recommending a particular cut. Approaching me, with furrowed brow and a look of grim concern, he circled my chair slowly. As last, he pronounced that a "graduated bob-cut on the bias" was the style for me and wrote "gradbob" on a mirror in black marker. I observed that he had no hair himself (by choice) and wondered if that fact had any hidden meaning for those of us offering our own heads as stylistic sacrifices.

Abby gamely began to divide my hair in the back using the method prescribed by Melvyn. After checking the work of the other seven stylists, he finally took a look at the back of my head. "You must overdirect, overdirect, here and here and here," Melvyn instructed Abby. "See the cross diagonal? Sectioning is everything. You're going for the A-line." I sat staring at them in the mirror wondering what on earth he was talking about and hoping I wouldn't turn out looking like the roofline of a Swiss chalet. Melvyn made several more references to "cross-checking," a term I've only heard on airplanes when the pilot instructs the flight attendants to "cross-check and prepare to land."

Melvyn continued overdirecting and cross-checking Abby, who painstakingly sectioned and trimmed. Each step was inspected by Melvyn, who wielded a red comb and applied his special pair of Japanese scissors the way the Iron Chefs chop scallions. For me, one who has lived through years of samurai haircuts — the kind where the stylist washes, combs, cuts and dries in less than 15 minutes — this two-and-a-half hour process was something to behold. Melvyn talked about the "flow" of the hair, Abby's body position as she was cutting, the need to or not to "elevate," a term used for lifting the locks as one cuts them.

Several times I thought the haircut was complete. Abby had followed Melvyn's instructions precisely, and yet he continued to fine-tune. She assured me that a usual haircut only took 45 minutes. The moment finally came when he scrutinized my new look, snipped a strand or two (it's called "cutting the outside line") and walked away. Mission accomplished. I'd been transformed into a person with a serious, meticulously crafted hairdo … la Sassoon school of technical haircutting.

When the last lock was elevated and eliminated, I was left with an amazingly detailed and perfected haircut. For now, I've got clean lines and conditioned hair, and it feels good.

Of course, give me a month or two, and I'll no doubt head back to Shoestring Salon for a cheap quickie. S