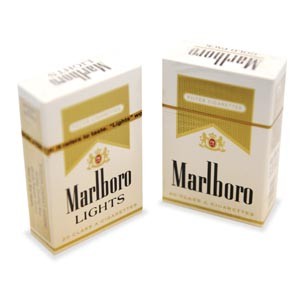 What's the difference between a Marlboro Light and Marlboro Gold? That's a question that the U.S. Food and Drug Administration wants answered.

In its latest spat with Richmond-based Philip Morris USA and its parent company, Altria Group, the FDA is questioning whether the world's largest cigarette manufacturer has cleverly disguised its white-and-gold Marlboro Light packaging with lettering that switches Marlboro Lights to Marlboro Gold Pack.

When the FDA took over regulation of tobacco last year, a move encouraged by Altria, it banned the marketing and advertising of cigarettes as so-called lights with lower tar, noting that they're still dangerous people killers. The ban took effect June 22.

Unless one reads the label closely, however, the new Marlboro Gold pack looks almost exactly the same as the older pack.

This is the second brouhaha Altria has had with the FDA. In March, Altria asked the FDA to remove four people it didn't like from a 12-person panel set up to oversee the agency's new regulations. Altria says the four panelists testified for plaintiffs in health lawsuits against it, making them biased.