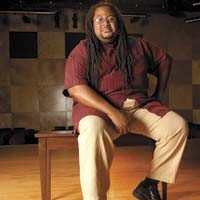 Perhaps New Jersey native Derome Scott Smith couldn't have found a better venue for realizing his dream of creating an African-American theater company than the capital of the Confederacy.

Smith, 38, taught theater for five years at George Wythe High School starting in 1995, pushing the limits of high-school theater all the while. He eventually took his drama class to the Edinburgh Fringe Festival for the student-written play, "Sugar in the Raw," and Smith's own tap-dance musical, "Langston is My Man."

In 2002, Smith founded the African-American Repertory Theatre (formerly the Living Word Stage Company), a permanent theatrical institution dedicated to illuminating the African-American experience. It's found a home at the Pine Camp Arts & Community Center with seven core actors and many community volunteers.

"I think what we're doing is making the African-American experience accessible to all audiences," Smith says. "The stories are not just for one community or audience; they are for a larger audience. We're the only professional African-American theater in the state of Virginia."

Smith also wrote "Mysteries of Plasma: The Charles Drew Story" for the Science Museum and a series of short plays called "African-American Trailblazers," for the Jamestown 400th anniversary celebrations.

Each summer, his theater sponsors "Life Stage" in conjunction with Richmond Parks, hiring 20 students to write, produce and tour a play through the city. This season, a grant from the Virginia Commission for the Arts is helping to sponsor the Classical Black Readers Theatre Series featuring a symposium with Amiri Baraka, the founder of the 1960s Black Arts Movement in Harlem. Smith's play about two homeless brothers, "Charcoal Street," will premiere as the curtain call of the season in June.

"One of our missions is to not just be a local force but a national force that attracts national talent," Smith says. "Actors and directors that will make Richmond a hotbed for African-American theater. So far we are definitely on the right track."