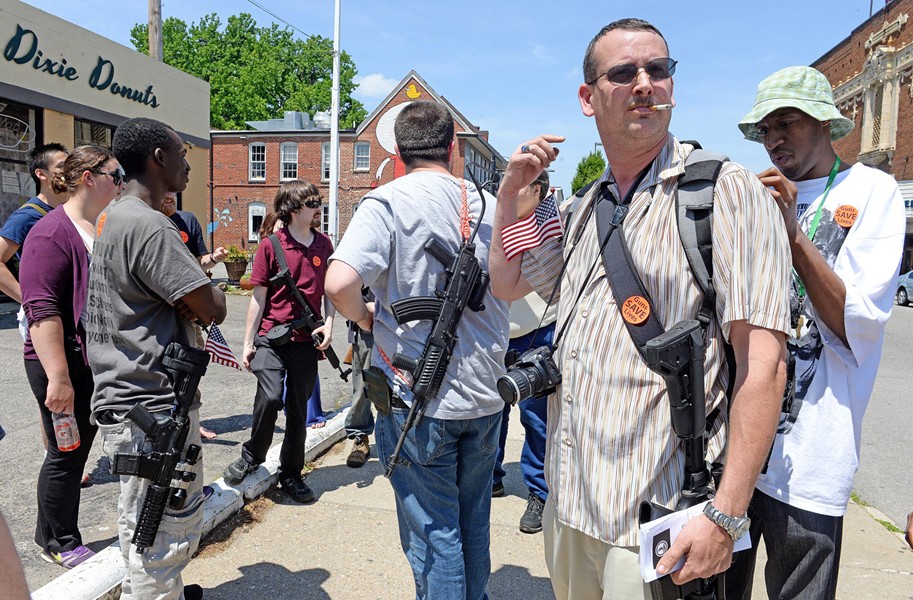 Jason Spitzer knew for months where he’d be at 1 p.m. on Memorial Day: sorting through a trunk full of firearms in the parking garage behind the Byrd Theatre. He’d strap one gun to his hip, sling another over his shoulder and walk around Carytown.

But when that hour came, Spitzer wasn’t there. He’d been buried two months earlier, laid to rest at Dale Memorial Park in Chesterfield.

In March, Spitzer and his fellow activists David Armstrong, Jimmy Higgins and Stephen Kim piled into Spitzer’s car to make their way to Michigan for an open-carry rally. In a collision with a tractor trailer in Ohio, all four were killed.

Where Spitzer would have been on Memorial Day last week, 14 people gathered — most armed with long guns, some with sidearms. They formed a circle in the garage and went quiet. Spitzer was usually the one who would have done the talking. One of them broke the silence.

“What were Jason’s rules?”

They were simple: Be safe, be polite. If someone is scared or combative, apologize and move along. Spitzer’s walks in defense of his right to carry large guns attracted attention from news media, police and anti-gun violence activists, and they knew marching on would mean more of the same.

After pausing again for a moment of silence, an activist who’d traveled from Detroit spoke up: “Let’s spread some liberty.”

That was the original agenda for the Memorial Day Open Carry Walk event, which Spitzer pitched as the anniversary of the first time he strolled down Cary Street armed, alone, with fliers describing Americans’ Second Amendment rights.

Richmond resident Reggie Bowles was the first to join Spitzer. They became fast friends, and Bowles would have been in Spitzer’s car heading to Michigan if he’d managed to get time off from work. He was in touch as they drove until the last few hours.

“It was a rough loss,” Bowles says, turning onto Cary Street. “We turned into real good friends. It was hard to lose that many friends at one time. And it could have been me.”

The walk brought out friends Spitzer never met, too. Mike Stanley is a member of Hell’s Saints, the Detroit-based group that Spitzer and his friends were on their way to visit when the accident occurred. Stanley already planned to attend Spitzer’s walk, but knew it was the best way to honor the members following their deaths.

“We kind of owed it to them,” says Stanley, who recalls being forced to the ground at gunpoint once by fearful police.

“People don’t understand what liberty means,” he says, looking at his firearm. “This is a means to start that conversation.”

There’s little conversation. Perhaps one of Spitzer’s legacies is the increased familiarity of the sight of a long gun among Carytown shoppers. One passerby says he wish he’d brought along his gun to walk with the group. Others walk by visibly wide-eyed and seemingly suspicious, saying nothing.

Sara and Jeff Farmer pass by with their small child.

“It’s pretty ridiculous,” Jeff says. “I get wanting to express your rights, but …”

At the end of the main drag, Stanley walks by a state police officer on a motorcycle who’s just finished writing a ticket. An eyebrow rises from under his aviators.

“You going to war or something?” he asks. “Is that thing loaded?”

The conversation stays cordial but tense. All insist the officer was fishing for a reason to give them trouble. Spitzer’s friend Summer, who gives no last name, hasn’t been relishing such interactions. The two were longtime friends, but never saw eye-to-eye on Spitzer’s methods of activism.

“I came out today for my friend,” Summer says. “I am a gun owner, but was never necessarily involved. But this is the community he felt most at home in. It’s a fitting sendoff.”

Summer credits Spitzer with an inclusiveness that has been lacking in the open-carry movement. The group gathered includes people of various races and political stripes.

“It’s not just old, conservative white dudes,” he says. “It’s people who share a mindset. And that was Jason — he brought people together.”

Bowles says he isn’t sure when the next walk will take place, but that the group will continue in honor of its lost comrades. “We still have the same goals,” he says. “We’re just missing a few faces.”