New labels are doing it with stylus. 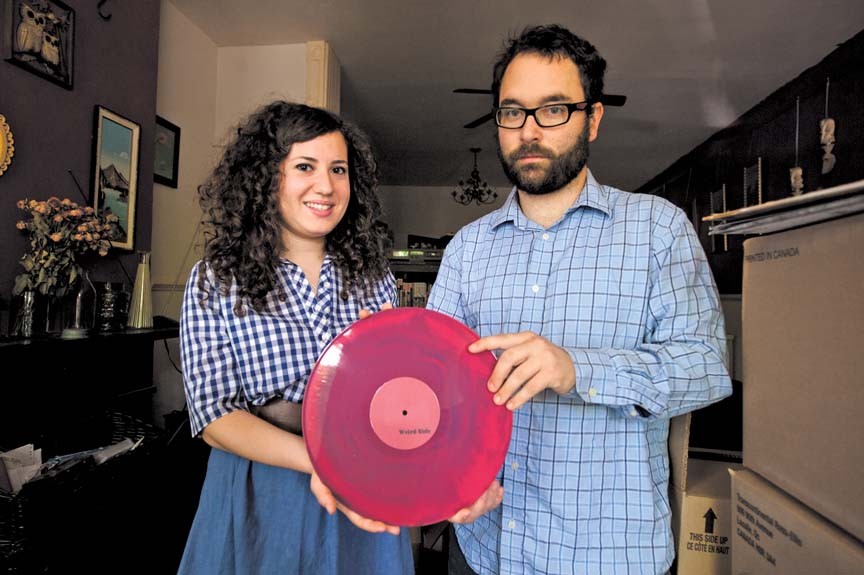 Three thousand dollars. That's the average out-of-pocket cost for a modern independent label to put out a vinyl record.

Add to that figure the labor involved in choosing a recording studio and engineer for the songs, mixing and mastering the audio, cutting the lacquers, approving test presses and manufacturing the actual records. The process is further complicated by the endless options for cover art and packaging aesthetics, with hours often spent pouring over color nuances for the vinyl itself or designs for the center circle of the record.

"I had no idea we would spend so much time doing things like this," says Talia Miller of Rorschach Records. Once the record is ready to sell, Miller says you must factor in promotional campaigns, filling orders and possibly booking tours. All of this adds up to a full-time job with limited opportunity for career advancement or even a paycheck. Despite all that, there are more than 20 labels in Richmond releasing music on vinyl — all of them led by music fans who can't possibly be in it for the money.

"It started as a label for my [music] projects," says Tracy Wilson, owner of Little Black Cloud Records. "I thought, 'I have the skill set to make this happen myself, maybe I should just do it.'"

Then Wilson heard a band called Cinemasophia that made her fall head over heels in love. "I don't think at that point I wanted an active label," she says, "but those songs just blew me away and I wanted an opportunity to document that for others."

Even though releasing records has wiped out her 401(k), perhaps a profit margin is irrelevant when you're trying to do something meaningful and selfless. "The main goal for me is to make sure the music is heard or at least available for people to hear," says Alex DiMatessa of Grave Mistake Records. But if a label stays in the red, it can't stay in business for very long. So DiMatessa makes a concerted effort to work with bands that are sure things. "I don't throw darts at a board," DiMatessa says. "Doing a label takes a lot of work and you get out of it what you put into it."

One challenge for label owners is the fickle nature of musical tastes. "I feel you have a three- to four-month life on a new record after you put it out," Miller says. "You sell a lot and people are into it, then they're on to the next thing."

Granted, small labels support musicians they believe in, but the promotional weight must be shared by the band. A record's success often depends on an active show schedule and touring beyond central Virginia, to stay fresh in the minds of fans. "In my approach of putting out other people's records," Wilson says, "my first thought is, 'Do they deserve it and are they working hard to help it sell?'"

Thanks to the Internet and social media, small record labels can keep tabs on a band's efforts, evaluate its fan base and measure its popularity, resulting in more informed decisions about the quantity of records to press. A couple of hundred extra records may not seem like a lot, until they're sitting unsold in your living room.

The majority of Richmond record labels focus on being outlets for local bands to get their music heard nationally and internationally. While there's never been a shortage of quality music being created in the River City, its storied punk underground may have played a role in the number of labels that sprouted within the city's limits. That's because for punk fans — and techno and hip-hop DJs — vinyl never really went away. "I can't remember a time from when I first got into punk and hardcore that there wasn't a stream of new 7-inches and LPs coming out," DiMatessa says.

It's estimated that more than half of the local record labels still specialize in punk, hardcore and metal. Fueled by inexpensive living, several colleges, and a prime location on the East Coast, creative types have moved here in droves, increasing a need to get records into the hands of the buying public. "Plus," Miller notes, "places [to live] are big, so you have room to run a record label out of your house."

The simple thrill of buying and listening to records underlies the decision to put one out, whether a label consistently delivers new records from new bands or limits output to a few select releases a year, hoping to sell just enough to break even. "I kind of know what religious zealots feel like," Wilson says. "While I'd never go door-to-door to Bible-thump my records, at the same time, when you fall in love with a piece of art the first thing you want to do is share it."