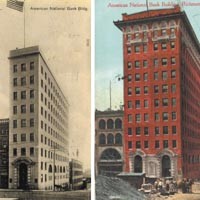 Three new soft covers that share the common thread of Richmond architectural history are available at local booksellers. The authors' respective approaches to history are comparable to phases of matter in chemistry: solid, liquid and gas.

One author, T. Tyler Potterfield, in “Nonesuch Place: A History of the Richmond Landscape,” uses solid evidence — literally the actual landscape of the capital city — in his examination of Richmond's physical development. With the configuration of the natural topography as his point of departure, he describes how various hills and valleys became streets, parks and cemeteries.

In their colorful book, “Greetings from Richmond,” Ray Bonis and Tom H. Ray use something much more fluid — 250 postcard scenes of Richmond and its environs — to create an often-changing snapshot from 1888 to the 1950s of many of Richmond's best-known landmarks.

Finally, in “Memory Lane: Richmond, Va., Vol. 3,” author R. David Ross uses something altogether invisible (but equally potent a force in the telling of history) — his memory — as the basis for his slim volume.

Although dozens of architectural history books have been published in recent years examining Richmond's physical past, each of these works seems fresh.
The title of Potterfield's book, “Nonesuch Place,” comes from the swashbuckling, early English settler John Smith, who wrote of the falls of the James in the early 1600s: “No place we knew so strong, so pleasant and delightful in Virginia for which we called it Non-such.”

The book is divided into five chapters. The first deals with the river, the second with the early picturesque city of “all hills, valleys and deep ravines.” Another, titled “Breathing Spaces,” examines such common ground as public squares, the manifestation of the late-19th- and early-20th-century national City Beautiful Movement as exemplified by the development of Byrd Park. Potterfield also focuses on Richmond's famous and not-so-well-known cemeteries. And finally, he examines briefly the surrounding countryside and Richmond's suburbs.

Although it's the landscape that drives his well-written history, Potterfield clearly has his heroes. One of them is Col. Wilfred Emory Cutshaw, a Virginia Military Institute grad and Confederate veteran who, beginning in the early 1870s as city engineer, took charge of public land development. Monroe Park and Jefferson, Libby and Chimborazo parks all bear his imprint.

In “Greetings from Richmond,” Ray Bonis and Tom H. Ray's selection of about 250 postcards (mostly from Virginia Commonwealth University's Cabell Library) trace what publishers and printers — and visitors — thought was important at various points during the last century or so. Their postcard-driven narrative begins in the city's East End, the site of the earliest English settlement, and shows such still-resonant sites as St. John's Episcopal Church and the Adam Craig House. But it also includes all-but-forgotten landmarks such as Union sympathizer Elizabeth Van Lew's elegant mansion on Church Hill. Similarly, Shockoe Bottom is represented not only by such landmarks as Main Street Station and the Poe Museum, but also by something long lost, Libby Prison. This Confederate jail was dismantled and last seen here being hauled to Chicago for the 1893 Columbian exposition.

Of all the neighborhoods featured, Capitol Square and Monument Avenue are perhaps least altered. In contrast the postcards of commercial Broad Street show it to be a stretch of ongoing architectural change.

One of the book's most startling images is an early shot of the American National Bank Building on East Main Street. Postmarked 1909, an impossibly narrow, three-bay building is depicted rising above an elaborate, classical entrance. The image that follows (disappointingly not on a facing page) shows the same building, but doubled in size. And in this second image the gray brick is miraculously a shade of red. Was the building painted or was this some publisher's flight of fancy? Of all of the images featured, the postcard reminding us of the loss of the glorious Gothic-styled All Saints Episcopal Church should make readers weep: What were they thinking?

Finally, the last chapter features postcard images of motels and restaurants on U.S. Route 1. In the mid-20th century, for visitors here, perhaps the journey was as important as the destination: Highways hurried motorists past our old haunts to flashier and warmer Southern climes.

The third, and slimmest of the three books, “Memory Lane: Richmond, Va., Vol. 3,” is an unabashed love note to our recent past. Richmonder R. David Ross has recently released the third in his ongoing series of bonbons. Written in a voice as if he were reminiscing at a high-school reunion, he devotes two pages to former institutions that for various reasons have disappeared. There are major retail losses such as Thalhimers department store and Berry Burk clothiers. And many readers will agree that such Richmond dining destinations as Mrs. Morton's Tea Room, the S&W Cafeteria and the Flying Cloud Restaurant were the stuff in their time.

Ross also mourns the loss of entertainment Meccas such as Golden Skate World, the Ponton and Venus movie theaters on Hull Street and Westhaven Lake and Haymarket Dinner Theater. And old-timers certainly remember Mad Man Dapper Dan, the used-car mogul whose oft-quoted slogan, “I'd give 'em away, but my wife won't let me,” always brought a smile.

Ross' most inspired inclusion is the 2001 Supper Club. With delusions of grandeur, the short-lived nightclub actually did present Dionne Warwick and Huey Lewis and the News during its short-lived run. Ross chattily engages us with each of the 25 entries: “Remember when?”

At a time when many folks see no overriding reason to visit downtown and the highway culture is disappearing — the former Executive Motor Hotel near Willow Lawn is being demolished as I write — we may experience our architecture as much from books or memory as from being out and about.

“Memory Lane” and “Greetings from Richmond” remind us of what was. “Nonesuch Place” tells us why many things developed as they did. All three volumes deserve a place in any Richmond lover's library.  S