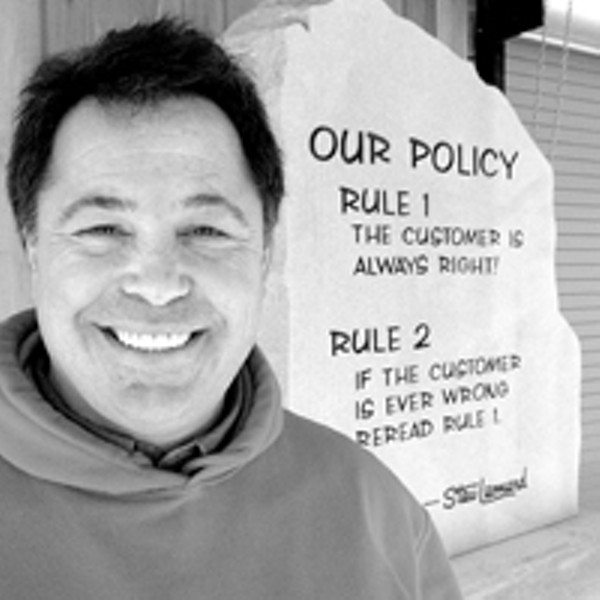 “This is a very small, fragile business,” says Leonard, 48. “If this business doesn’t work, I lose my house.” If that happens, of course, he could always move into his father’s palatial vacation home in the Caribbean, where the family gathered at Christmas.

Odds are that won’t happen. The Leonard track record for building business borders on legendary. The company has been immortalized by the king of business authors, Tom Peters, and makes regular appearances in the Guinness Book of Records for having the highest sales “per unit area” in the grocery world. The company’s penchant for customer service is textbook — so much so that Exxon, IBM, PepsiCo and AT&T have sent their executives to Stew University for management seminars.

In fact, customers are so loyal that they looked the other way when Stew Leonard Sr., who founded the chain in 1969, went to federal prison in the early 1990s for skimming tills and evading taxes to the tune of $15 million. The scandal, however, allowed Stew Sr. to pass the reigns of the company to his son, who managed to grow the business even further. What should have been a devastating blow to the business turned out to be a nonevent. Customers kept coming back.

The company offers incentives such as free lunches, cash bonuses, free coffee and doughnuts, and even company-sponsored jaunts to casinos. Employees receive “Moo Notes” when they perform well. Fortune Magazine recently contacted Leonard Sr. to inform him that the company made the 2004 list of “100 Best Companies to Work For” to be published in January. (In 2003, Stew’s ranked No. 30; Ukrop’s No. 71.)

All that, Stew Leonard says, motivates employees to live up to the company’s mantra, chiseled onto a giant rock outside the store:

“Rule 1: The customer is always right!

“Rule 2: If the customer is ever wrong reread Rule 1.”

The week before Christmas, Tom Leonard had a replica of the rock delivered to his Richmond store, just off West Broad Street in Short Pump. The granite monolith weighs 10,000 pounds, and sits adjacent to the aluminum garage doors that serve as the store’s entrance.

Tom Leonard, a short, sturdy man with a salesman’s smile, excitedly climbs onto the rock to have his picture taken.

“I always wanted to run my own store,” says Leonard, who spent several years running the Stew Leonard’s in Danbury. His wife’s family is from Richmond, however, and he moved here a few years ago to help care for his mother-in-law, who had suffered a stroke. One Thanksgiving, while his father was visiting, they took a trip to Best Buy to look at plasma-screen televisions.

His father stopped the car and said, “Why don’t you build it there?” Leonard recalls. “Why don’t you start out small and let the customers grow with you.”

So he did. He and his father bought 6 acres on Brookriver Drive and the younger Leonard went to work. He started by selling pumpkins in the parking lot in October and then Christmas trees until last week. When the store opens in February, he plans to start selling produce in bulk. Like the Stew Leonard’s stores in Connecticut, Leonard plans to do just about everything in bulk. Instead of every kind of produce imaginable, the store will offer large quantities of fewer items. There is no middleman, no distributor, he says; the produce will be brought in directly from farms in California, Florida, Texas and wherever else fresh foods are farmed.

The merchandise will change as the seasons and best deals dictate, Leonard says. And it won’t be limited to produce. There could be a coffee bar, he says, displays of milk, cheeses — whatever tickles the customer’s fancy. Leonard plans to build the business based purely on their input. “If our customers said all of sudden, ‘We want potatoes and rice,” Leonard says, “we’d sell potatoes and rice.”

There are risks, of course. Such a strategy conflicts with a key maxim in grocery retailing: consistency. “People don’t want too many changes each week,” says Robert S. Ukrop, president and chief executive of Ukrop’s Super Markets Inc., which now has 29 stores. “There has to be a certain amount of continuity.”

Especially in Richmond, where change isn’t exactly embraced. Ukrop says the family-owned chain is assessing its business to see where it might be vulnerable, as it does when any new competitor enters the market.

“I visited their stores up there,” Ukrop says. “They do a wonderful job. We will try to be sharper. They will be a formidable competitor.”

Andrew Wolf, a retail analyst who follows the grocery business for BB&T Capital Markets in Richmond, says the Stew Leonard stores are a destination. They don’t fit into the traditional grocery mold. Their strategy is to make shopping an event, largely by entertaining the kids, giving moms valuable time to shop. “Where the children go, mothers will follow,” the senior Leonard says.

While unfamiliar with the new Tom Leonard store in Richmond, Wolf says Stew Leonard’s targets the same upscale customers as Ukrop’s. But because of the size, there isn’t “a lot of density.” Even if Tom Leonard’s grew to three or four stores here, it would hardly be enough to compete on the same scale as Ukrop’s.

The Leonards expect to expand, but have no firm plans. The store in Short Pump was constructed with breakaway concrete walls and plenty of room to grow.

Stew Leonard’s is keeping the family busy for now. The company is preparing to open a fourth store on Long Island in 2004, and a fifth store isn’t too far away, the senior Leonard says. “We’re not planning to move to Richmond,” he says.

Richmonders have a history of loyalty, especially to the Ukrop family. Despite a big push by Wal-Mart in the last five years, and the Kroger Co.’s recent buildup here, Ukrop’s has maintained its nearly 40 percent share of the grocery market, according to Food World, a trade publication that tracks the grocery industry. Ukrop’s has remained top dog without budging from its policy not selling beer and wine, and of closing on Sundays, the second-busiest shopping day of the week.

“We work hard to try to defend our business and retain our customers,” says Bobby Ukrop. “And we will do the same thing as they open their business.”

The senior Leonard isn’t planning to take on the Ukrop family. “Ukrops are our heroes,” he says, reached by phone in St. Martin. “Everyone looks up to Ukrop’s. We’re just a bump on the log compared to Ukrop’s.” S