Watch out: There may be more Francophiles filling Cary Street than ever this year. 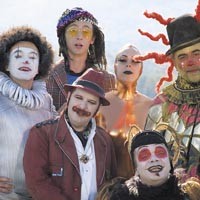 Maybe it's a testament to the belief that the entertainment industry is recession-proof, but despite the shrinking economy the French Film Festival seems to be getting bigger. At least its name is.

This year you have to call it the VCU and UR French Film Festival, because after 17 years the University of Richmond officially joins Virginia Commonwealth University to help throw the three-day festival of shorts, features and seminars that take place at the historic Byrd Theatre in Carytown. “This is fitting,” says festival co-founder Peter Kirkpatrick — a VCU professor who started the festival with his wife, FranAoise Ravaux-Kirkpatrick, a professor at UR — “and actually the way the festival should have been co-billed from its origins.”

This year also sees the arrival of technicians from the prestigious Commission SupAcrieure Technique de l'Image et du Son (CST), a world-class organization of projection technicians, who will be taking over the job of getting that machine up in the little booth over your head to put a pristine picture on the screen in front of you. These are the same people who do this at the Cannes International Film Festival: “the guys,” says Peter, “who write and set the optical standards used on both cameras to shoot films and projectors to show films. They are the best cinema techs in the world. ... the reason that Cannes only entrusts its projections to this team.” The CST folks will also put on a master class Friday at noon, demonstrating what's groundbreaking in the latest digital-projection technology.

Festival co-directors Peter and FranAoise never seem to miss an opportunity to maximize potential, and the same master class will help celebrate the bicentennial of the birth of Edgar Allan Poe by screening shorts inspired by Poe's life, shot by students at VCU and La FA"mis film school in Paris.

The rest of the festival features the usual bevy of feature films and shorts, offering comedy, drama, documentary, action and farce from the likes of Josiane Balasko, Pierre-William Glenn, Claude Miller, GAcrard Krawczyk and Philippe Muyl, culminating with the traditionally crowd-pleasing Sunday afternoon of short films from France's brightest up-and-coming filmmakers as well as exclamatory feature-lengths such as “Magique!” The other big change falls on our side of the pond, though: We can't lord our liberal smoking ordinances over them anymore. S

The French Film Festival runs March 27-29 at the Byrd Theatre, 2908 W. Cary St. Tickets are $12 per screening and weekend passes are $45-$120, depending on your options. Visit www.frenchfilm.vcu.edu for the schedule or call 828-FILM.