Free Ice Cream (If You Live in Church Hill) 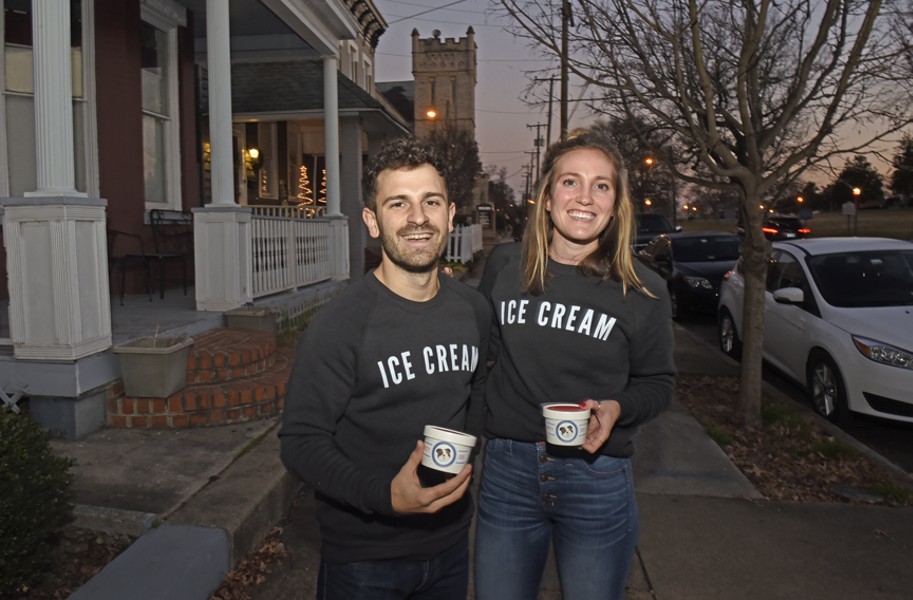 It’s either a dream come true or dangerously addictive. You make the call.

Say you're sitting at home in Church Hill on a Friday evening watching your latest television obsession when there's a knock at the door. Standing there are Hannah Sager and Alex Miller handing you a pint of their handmade ice cream in the flavor of the week. There's no cost to you and they don't accept tips.

The purveyors of Spotty Dog Ice Cream have an outstanding way of slowly introducing their product to their neighbors. Follow them on Instagram and when they announce the flavor of the week on Thursdays, all you have to do is text or email them to set up a delivery time Friday or Saturday nights from 6 p.m. to midnight. Here's the catch: You have to live in Church Hill. And don't dally, because the weekly ration is spoken for quickly.

If anything speaks to the state of Richmond's food scene as we head into 2018, it's that if you live in the right neighborhood, free ice cream comes to you.

Sager and Miller moved to Richmond a year and a half ago from New York, where they lived over an ice cream shop. Ice cream devotees even in cold weather, they wanted to do something similar here and after moving to the Hill, felt they'd found the perfect environment. Friends were the first recipients of their largesse.

They don't have a commercial kitchen yet — they hope to by early spring — so they can't sell their ice cream, but they saw no reason not to take the opportunity to share with nonfriends and get feedback. Last weekend, they doubled production of their New England style ice cream – dense and cheesy with a tacky texture, no iciness or fluffiness — and did a pop-up at Dear Neighbor.

Flavors follow the calendar with PB&J for back to school and pumpkin roll — pumpkin ice cream with mascarpone and bits of ginger — in November, "A lot of the flavors come from what we like to eat," Sager says, citing banoffee, based on the English pie made with bananas, cream and toffee in a crust of crumbled biscuits, as her favorite so far. They're such purists they use crushed McVitie's digestive biscuits in their banoffee.

Once they get up and running with a commercial kitchen, they'll begin looking for a storefront in the neighborhood. They've already decided that delivery and late weekend hours will be part of their business model.

"Winter's the best time to eat ice cream because it's the coziest," Miller insists. "Right now it feels like an underground thing. It makes people feel very in the know to get their Spotty Dog delivery."

Meanwhile, the rest of the city awaits its turn.