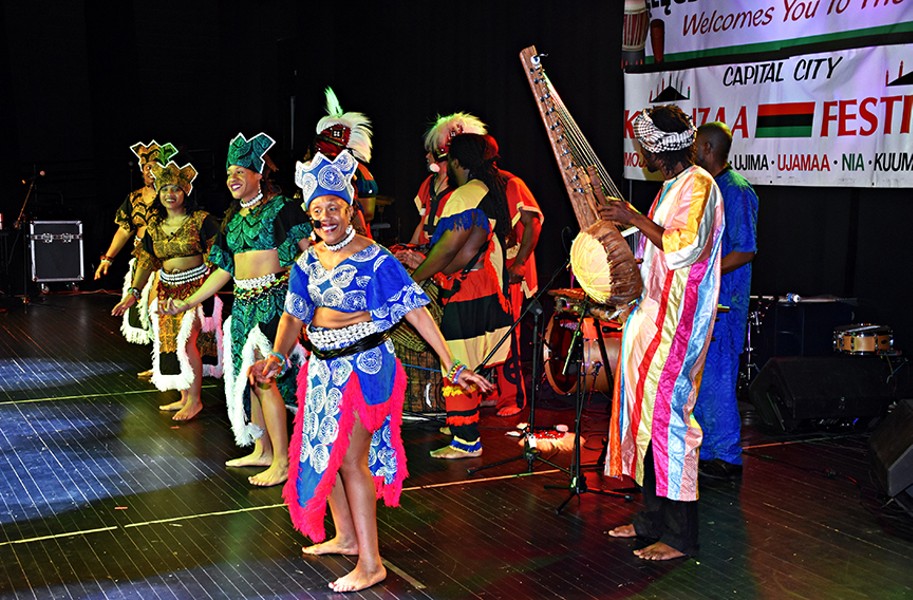 It was during the height of the Civil Rights era in 1966 that Kwanzaa was established as part of the Black Freedom Movement’s rising consciousness. Kwanzaa is a Pan-African, year-end holiday of remembrance, thanksgiving and recommitment to cultural values. Celebrated for seven days, from Dec. 26 through Jan. 1, Kwanzaa’s origins are in Africa’s first harvest celebrations and the seven principles, known as Nguzo Saba, provide the basis and guidelines for the holiday.

For 30 years, the Elegba Folklore Society, a local group dedicated to celebrating African and African American culture and life, has been presenting the annual Capital City Kwanzaa Festival. Janine Bell, the organization’s president and artistic director, recognized the need for the annual celebration in Richmond and saw its importance culturally.

“African people came to America in chains, stripped of identity and humanity, leaving most African Americans with an adapted identity devoid of cultural affinity,” she explains. “The Kwanzaa holiday was created as a form of cultural education and personal affirmation to restore the ideals of our traditional greatness.” Usually, whole families are involved in preparing the home, observing the Nguzo Saba and the undergirding philosophies of Kwanzaa.

But if any year has proven that traditions can fall by the wayside, it’s 2020. Even so, Bell admits there was never a moment’s consideration given to canceling this year’s festival and so the plan to take it virtual was born. She insists there’s no way to understand and appreciate the meaning and message of Kwanzaa without understanding that its reason for existence, its length of seven days, its core focus and its foundation are all rooted in a concern with values.

Long considered a time for gathering of people to reaffirm the bonds between them, Kwanzaa is also a time of special reverence for the creator and the blessings, bountifulness and beauty of creation. Significantly, it’s a time for commemoration of the past in pursuit of its lessons and in honor of ancestors. It represents a time of recommitment to the highest cultural ideals in the ongoing effort to bring forth the best of African cultural thought and practice. Finally, Kwanzaa is a time for celebration of the goodness of life and of existence itself, as well as the good of family, community and culture.

This year’s seven-night virtual fest will feature nightly candle-lighting ceremonies with discussions of the Nguzo Saba - the seven principles – as well as performances and talks by artists and historians, local speakers, discussions on a variety of topics to underscore the need for a strong cultural foundation, children’s activities, material culture and foodways demonstrations and workshops. Performances will include music, dance and poetry, while children’s programming will take the form of craft making and storytelling. Senegalese chef Awa Thiam will share with home cooks the creation of thieboudienne, a flavorful fish and rice dish with vegetables.

Every night's activities will be different and are free to the public and can be seen either on Elegba Folklore Society’s webpage or its Facebook page beginning at 7 p.m.

“This is a family celebration that creates an atmosphere and a forum for individual focus, family strengthening, community building, recommitment and the enjoyment derived from being a vital part of the African world community,” Bell says. “This is our year-end thanksgiving as we acknowledge the fruits of our labor and project new growth for the year ahead.”

With the festival virtual this year, Elegba sees it as an opportunity to reach even more people, from Kwanzaa celebrants to those who’d like to know more about the holiday and aspects of African and African American heritage.

While it’s the 54th anniversary of the Kwanzaa holiday, Bell says it’s been important every year - from its origins in the Civil Rights Movement to this era’s social justice movement - to celebrate. “African Americans have endured ongoing oppression and have repeatedly demonstrated resilience and excellence throughout our 13 generations in America,” she says. “Celebrating Kwanzaa can infuse a clearer self-view and an alignment with our highest ideals. The seven days of the holiday invite an immersed focus for practice in the ensuing 358 remaining days of the year.”

The Capital City Kwanzaa Festival will be held from Dec. 26 to Jan. 1 online at the Elegba Folklore Society’s Facebook page.