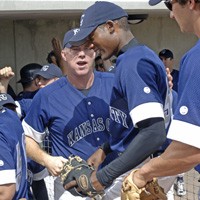 A sports movie, “Sugar” nevertheless contains one of the most brutally honest lines of dialogue about life to be found in any genre. Near the beginning of the movie the title character (Algenis Perez Soto) reaches a pitching camp for the American baseball minor leagues after working his way up from a farm league in the Dominican Republic. “Just remember,” the coach hollers out to the expectant new players assembled on the field, 75 young men who will soon be whittled down to 50, “until you reach the top, there's always guys above you hustling to keep you down here and guys below you pushing to take your jobs.”

So begin the travails of 19-year-old Miguel Santos, nicknamed Sugar for all the sweets he eats while trying to gain weight, whose constant anxiety is to fail the expectations of a lifetime of work and the hopes of his family as he pitches for a chance to make it to the major leagues — an entirely possible but, as the film shows us, cruelly arduous goal.

The movie was written and directed by the filmmaking team of Anna Boden and Ryan Fleck (“Half Nelson”), with Boden and Fleck reportedly traveling to the Dominican Republic to learn about their subject, where they found first-time actor Soto, who'd been a baseball hopeful like his character, Sugar.

The result is something between documentary and narrative filmmaking, hugging its protagonist like a tight strike low and inside, while dropping subtle observations that convey how strange and difficult the world he now inhabits is to him. Sugar makes what looks like a normal salary, around $500 or so per paycheck after taxes, while a teammate, a Stanford grad also working his way up to the majors as a second baseman, was signed for $1 million.

But little things also pile up. Sugar's simple battles with the menu at a diner and the turnstile at a New York City subway terminal will endear him to anyone who's experienced the universal plight of being a foreigner trying to figure things out alone.

At first Sugar is an ace on the field, making his way up baseball's hierarchy of leagues with ease, though the film's always careful to convey Sugar's personal struggle while giving a sense of the larger world trying to ruin him. Using the limitation of a small budget to their advantage, Boden and Fleck demonstrate the plight of players like Sugar with a startling realism and a refusal to lapse into typical sports-movie clichAcs. You may think you know where the kid's going to end up, but right or wrong the film will surprise you with each curve it throws. (R) 114 min. HHHHH S