The Virginia Mercury will go live next month. 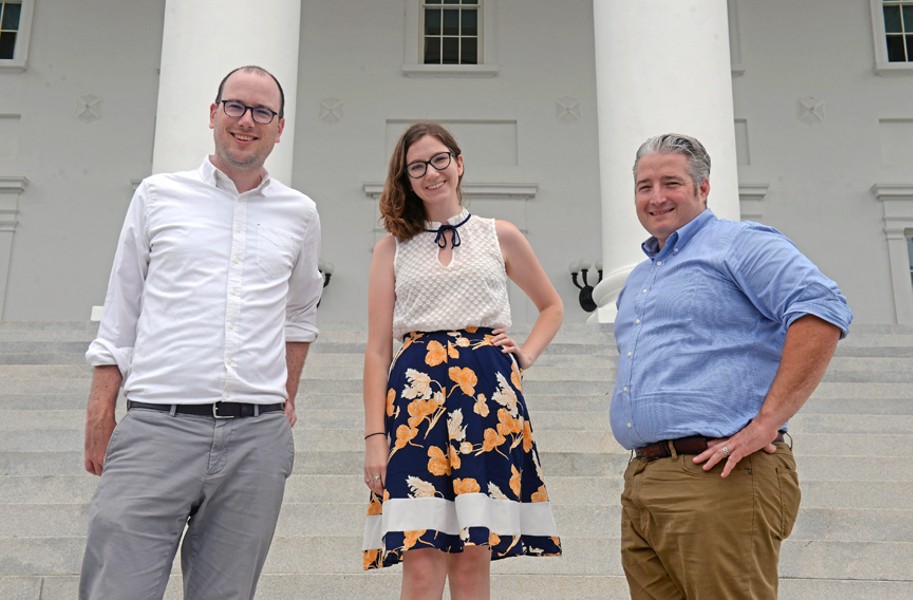 Scott Elmquist Former Richmond Times-Dispatch reporters Ned Oliver, Katie O’Connor and Robert Zullo will lead the charge at the Virginia Mercury, which launches online next month. Not pictured is reporter Mechelle Hankerson, formerly of the Virginian-Pilot.

Three former Richmond Times-Dispatch reporters have joined a state-policy-focused news outlet that will go online next month. The Virginia Mercury’s offices will be in the Stearns Iron-Front Building, near the State Capitol. Robert Zullo, who most recently covered environmental news for the Times-Dispatch, will be the editor. For reporters, he’s hired Ned Oliver and Katie O’Connor from the Times-Dispatch and Mechelle Hankerson from the Virginian-Pilot.

In an effort to overcome problems rattling the news industry, the Virginia Mercury will not depend on ad or subscriber revenue. Instead, it will use a nonprofit model. The New Venture Fund in Washington is pooling donations from numerous sources, in state and out of state, Zullo says. The organization will also be funding a group of sites similar to the Virginia Mercury, countrywide. Some will be brand-new projects and some will be a revamp of pre-existing papers, like the Colorado Independent. Zullo hopes to work with other state outlets, print and digital, in order to spread coverage beyond the site.

The Virginia Mercury is intended as a supplement, not a replacement, to local news coverage, Zullo asserts. But the news team will cover a Richmond story, particularly if it illustrates a larger topic related to state government. “There are a lot of interconnections,” Zullo says. “What I would like us to be is almost akin to a Vox. We’re looking at an issue, we’re trying to explain why it exists and identifying the barriers to addressing it.”

Broadly, coverage will include energy and the environment, transportation, health care, criminal justice, and eventually education. “FOIA and elections are what we want to cover right out of the gate,” Zullo says. “As the capitol press corps has shrunk, a lot of meatier issues tend to get left by the wayside. I think there are a lot of issues with Virginia’s FOIA laws. Lots of exemptions, lots of loopholes.”

The website will aim to be attractive and easy to navigate, Zullo says. He uses words like “rigorous,” “thorough,” and “unimpeachable” to describe the brand of journalism he’s after. But he also doesn’t want the policy deconstructions to lose sight of the fact that people’s lives are affected.

Former Style reporter Ned Oliver, who became known for his City Hall beat at the Times-Dispatch, says his coverage will range from curiosities like small state committees to serious stories on immigration, poverty and housing. Oliver’s also known as a drone footage enthusiast, and he’s excited about the site’s technical flexibility. It’s the words, though, that matter.

“The internet is primarily a textual format,” he says. “It’s really exciting to start something new. Endless possibilities, but then a lot of pressure, because I want to make sure this launch makes a good impression. Especially the first stories we’re writing, we feel are going to define us to a certain extent.”

Katie O’Connor says she plans to cover all aspects of health care, from the business of hospitals to how people can improve health outcomes. She joined the Times-Dispatch as a health care reporter in 2016 and was selected in 2017 for a yearlong fellowship with the Association of Health Care Journalists. She also previously wrote for Richmond Bizsense and the Northern Virginia Daily.

Experimenting with different article formats “is one of the most appealing parts of coming here,” she says. She’s prepared to write long-form stories, quick hits and other narrative styles. “I learned a lot at all the places I’ve been … and this is an opportunity to use what I’ve learned and start something fresh, and have a bit more say in where the health coverage goes.”

Hankerson will be covering state government. Before the Pilot, she previously worked at the Raleigh News and Observer and is a Virginia Commonwealth University graduate.

Zullo worked at the Times-Dispatch twice, first from March 2012 to August 2013. He then went to the Pittsburgh Post-Gazette until the beginning of 2016, when he returned. The travels allowed him to observe the nationwide disruption happening to newsrooms, particularly smaller local ones. His wife found the Virginia Mercury job listing on the day of the Times-Dispatch’s last round of layoffs.

“It’s a business problem, not necessarily a content problem or a readership problem,” Zullo says, with respect to the disruption. “How to pay for it has been the challenge that no one seems to be able to solve, except on the biggest scale, like the New York Times or the Washington Post. What they’ve shown is it takes investment and a real purposeful shift … to build your paying online audience around journalism as the brand.”

“My goal is to adhere to that same ethos, we just have a different publishing mechanism. But we’re all experienced journalists that come from very traditional journalism backgrounds, and I hope that lends some credence to what we do.”