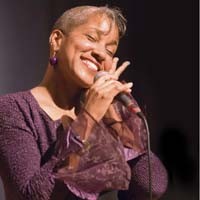 Jazz vocalist Rene Marie caused a stir in her new hometown of Denver last week after she was invited to sing "The Star-Spangled Banner" during Mayor John Hickenlooper's State of the City address.

Marie replaced the traditional lyrics with the words to "Lift Ev'ry Voice and Sing," a song that many people regard as the black national anthem.

Denver officials were not impressed.
"What I was was disappointed and confused," Mayor Hickenlooper told a Denver NBC affiliate.
The song comes from a poem written by James Weldon Johnson in 1899. His brother set it to music, and it was sung for the first time the following year to celebrate Abraham Lincoln's birthday. A choir of 500 black children performed it at the segregated school where Johnson served as principal.
In a statement released after her rendition of the song, Marie wrote that as a child growing up in segregated Warrenton, she "sensed on a fundamental level that there was a disconnect between the patriotic songs I loved to sing ... and the humiliating, not-quite-a-citizen experiences that black folks were enduring on a daily basis." She says she chose the song to express her mixed feelings about the country.
The late-blooming star launched her career in Richmond in 1999, collaborating with Doug Richards, the big-band leader who founded the Virginia Commonwealth University Jazz Studies Program. She has since cultivated an international following.
Apparently, she even crossed the radar of Democratic presidential candidate Sen. Barack Obama. Campaigning last week in Colorado, he weighed in on the scene in Denver.
"We only have one national anthem," he told the Rocky Mountain News. "And so, if she was asked to sing the national anthem, she should have sung that. 'Lift Ev'ry Voice and Sing' is a beautiful song, but we only have one national anthem."
For those familiar with Marie's work, the strategy of blending two songs is not a new one. On her third album, "Vertigo," she sings a hybrid track starting with an a cappella rendition of "Dixie" that melds into an accompanied version of "Strange Fruit," a song renouncing American racism made famous by Billie Holiday.
Does she regret singing a different anthem? "No. I do not," Marie says.
She was not the only one who strayed from the script that afternoon. When Denver City Council President Michael Hancock introduced the singer to the crowd, he called her "Rene Martin."