Just last month, tenants at the Garber building at 2201 E. Franklin St. had to vacate the premises after its owner decided to sell the building.

At one time, there were as many as 30 local bands renting practice space there, including legendary local institutions such as Bio Ritmo, one of the first in the spot.

Many musicians are still struggling to find new rehearsal spaces. Also, I've been told some are in the early stages of trying to pool money to purchase another building -- though I've learned of little progress on that front.

Meanwhile, former Richmond-based musician, Allison Apperson, known mostly for the successful indie group, Hot Lava, is editing a documentary about the Garber building and its unique history. A tribute, if you will, to a piece of local music history.

"Kelly Queener (Peace Beast, awesome girl) kind of gave me the idea by mistake. She asked if I could help her with a 'Garbers video' since the building was closing," says Apperson via e-mail. "I immediately thought she was talking about a documentary, but she meant a music video. We did work on a music video too, but that's another story."

I've seen a rough cut of the short doc (tentatively titled "Goodbye Garbers") and it looks great while offering insight about the owner, Carl Otto, as well as the local working musician's existence. It mostly covers the period from the 1980s until the most recent development (Apperson notes that the building was abandoned for 20 years before the current owner purchased it). 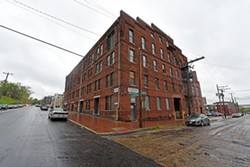 Apperson recently relocated to Chicago with her husband for a new job. She got her masters at the VCU Brandcenter, where she took some film classes, "mostly from an advertising standpoint, but I picked up on it," she says.

After the idea of a documentary was planted in her head, Apperson began interviewing people in the building.

"I thought Giustino [Riccio] from Bio Ritmo would be the perfect person to put this thing together with since he knew Carl [Otto], the building owner, and basically everyone else on the planet," she says. "We interviewed a ton of different people in Garbers bands. We tracked down the first band that ever played there (we found them from the comments on the Style article)."

Apperson says the documentary will revolve mostly around Otto and how and why bands ended up there, in a building with a mysterious history that became renowned for its late night jams.

"[Otto's] a really interesting guy. We recorded Peace Beast, MANZARA, Bio Ritmo, White Laces and Bush League playing," says Apperson. "I'm editing it now and hope to have it done by the end of July."

Apperson says the final product should be a little less than 20 minutes in length.

I've been told by musician Paul Ivey, who is working on a compilation of local bands covering other Richmond artists, that the film is likely to be screened at Gallery5 during the album release party for his vinyl compilation. (More on that story soon. I've interviewed Ivey at length about the project, which should be due out early next year).