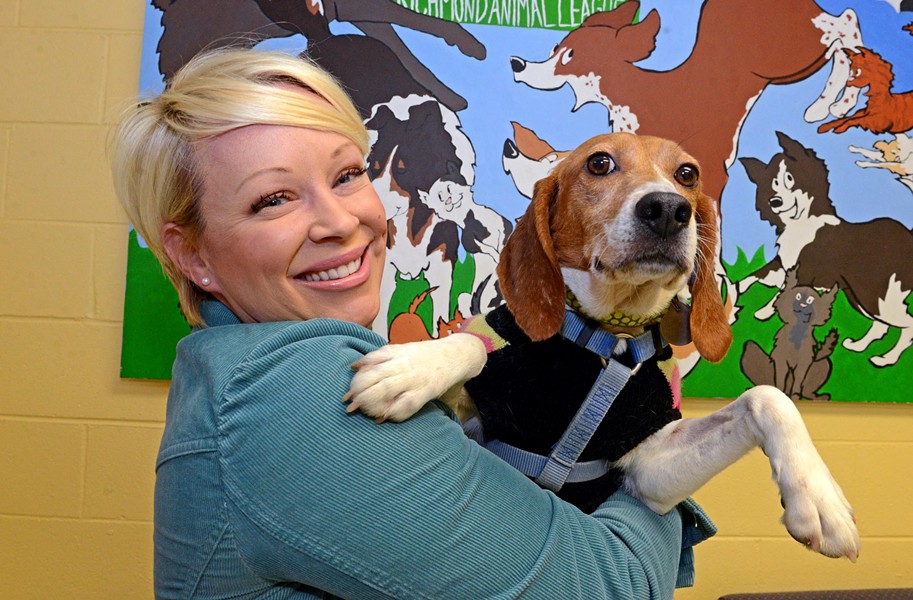 Lauren Brown is fostering Ginger, one of a dozen beagles bred for research that are up for adoption at the Richmond Animal League.

Ginger, an 8-year-old beagle wearing a loud sweater, spent the bulk of her life in a facility that breeds dogs for scientific research. One of the recent tests she was subject to involved an ophthalmologist collecting her tears.

Last week she arrived at the Richmond Animal League, where she and 11 other beagles bred for research are up for adoption.

“We wanted these dogs to have a chance to be pets even though they spent their lives without ever being outside,” says Amy McCracken, the group’s executive director.

The Richmond Animal League picked up the beagles from Virginia Tech, which purchased them from the breeding facility for veterinary training in October. The dogs, well cared for by the university, had given birth to about 12 litters each, McCracken says.

It’s the first time the league has rescued dogs from a research environment, she says.

None of the animals is housebroken, McCracken says, and several refuse to go to the bathroom on anything but concrete. Otherwise the dogs are curious, friendly and well-mannered. Information on adoption is available at ral.org.

Lauren Brown, a board member at the league, is fostering Ginger until she’s adopted. She says she watched the dog see her reflection for the first time: “She was scared at first but now she likes to look at herself.”

Ginger’s still learning how to play, Brown says, but she’s hopeful: “We bought her a bunch of toys. She doesn’t know exactly what to do with them yet, but she’s learning.”