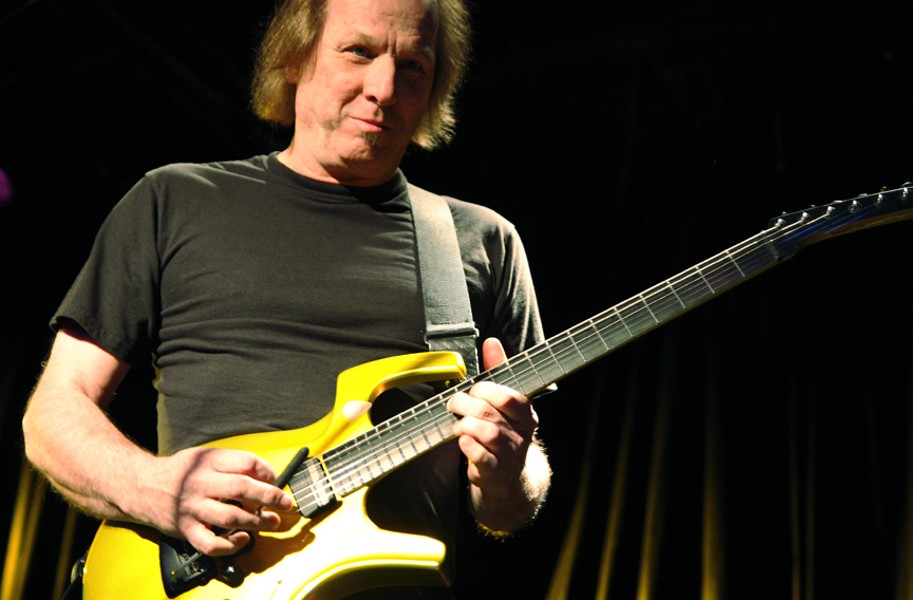 It's been more than four decades since Adrian Belew surged onto the rock scene, sweeping from top band to top band on a swelling tide of impossible sound.

First it was Frank Zappa, whose idiosyncratic compositions combined satire with fiendishly challenging compositions. That led to tours with David Bowie and the Talking Heads and sideman gigs including with Paul Simon and Nine Inch Nails.

"Sound has always been the propelling factor in my style," Belew says. "I saw a lot of players all doing the same thing, so I made a conscious effort not to sound like everyone else. At first that left me with not much, but I had a knack for the components of making sounds, and traveled the world with bands, playing like car horns or seagulls, elephants or rhinoceroses."

Belew's unique technical virtuosity made it possible for someone like Bowie to deliver live performances of songs crafted in a studio with cutting edge post-production magic.

He's built a solid, if lower-profile career. In the mid-1980s, he and longtime friends formed the alternative power pop group the Bears. Wikipedia currently claims the name was chosen to put their records in the store racks next to the Beatles. Another theory: It's from homonymous Baloo the bear from "The Jungle Book." The guitarist has a simpler explanation.

"It was supposed to sound like a little league [baseball] team name. I wanted the Tigers, but I am not much of a sports person," he says, adding that they wanted to replicate the popular success of the Police.

"It was a great band," Belew says. "We agreed at the start to give it four or five years to get really popular." Members still get together occasionally to record in Belew's home studio.

"Starting that studio in 1992 has probably been the most important decision of my career," Belew says. Built in the bottom floor of his house, it has up-to-date recording systems, an acoustically reconfigured interior and guest quarters for collaborators. "As home studios go, it's way up there."

Being able to work continuously facilitated his creativity and allowed him to receive more upfront money from record labels. As the internet disrupted the recording industry, Belew took advantage of the new technology and his ever-growing library of home recordings to create a mobile application called Flux. Fully realized components, from ambient orchestrations to country melodies, lasting from five seconds to less than five minutes, are assembled into random 30-minute play lists accompanied by hypnotic animations.

"It's working out fine," Belew says. "I have an audience everywhere, and I get around the globe every two or three years. If you follow some basic rules -- have a small amount of gear, and not too many people -- you can make a living."

For years his mainstay was the ironically-named Adrian Belew Power Trio. "That term usually means three people playing more than they should," Belew says.

But for the Richmond gig, bassist Julie Slick and drummer Jordan Peterson are augmented by keyboard and vocalist Saul Zonana. Belew says the lineup "makes the sound checks longer. But the expanded harmonies let me do songs from my past that I couldn't do with the trio." And it made perfect financial sense, as Zonana was already traveling with them as their opening act, and will open for them in at the Broadberry.

Ultimately, the secret to longevity isn't careful budgeting, 21st century delivery models, or even branded sonic innovation. It's strong lyrics and melodies. He started his career adding his guitar magic to someone else's bold vision, and in his solo career it supports his own songwriting. "I've played with so many people. But in the end, it all comes back to here is who I am. Here is what I have learned. This is what I want to do myself."

His original inspiration was the Beatles, but now, deep in his career, he credits Frank Zappa as his key influence.

"Frank was always generous, a true mentor," Belew says. "From him, I learned how to be a musical artist. Every day is about refining the possibilities. I write songs that make sense to the average person. It's where I go with them that is unique."