Viewer interest vanishes in "The Forgotten." 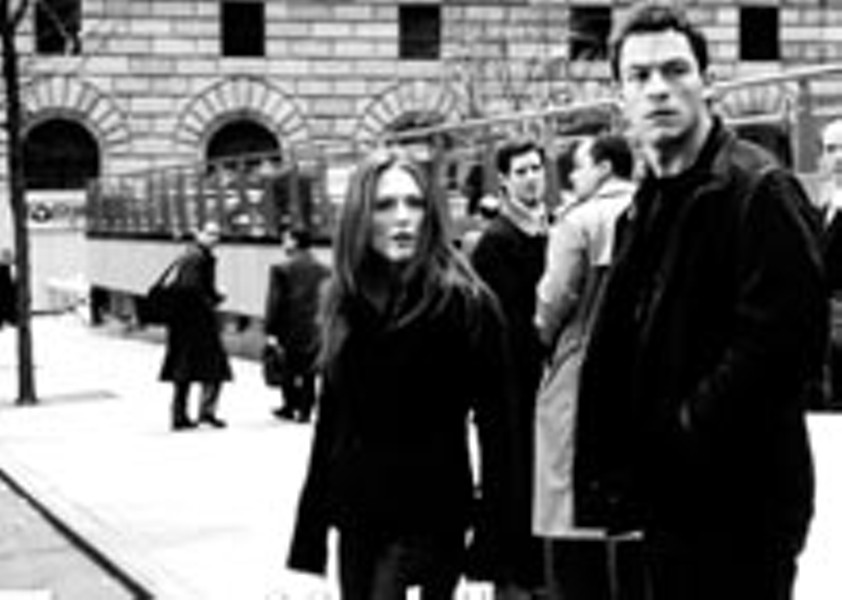 Where do you go from there? If you're screenwriter Gerald Di Pego, you up the ante by offering one harebrained lurch towards the conspiratorial and supernatural after another, until his characters' resemblance to actual human beings is buried in a flood of hogwash. He's like a child caught in a fib, trying to wriggle out of his predicament by cooking up ever more extravagant fantasies.

In the opening scenes, Moore endures the unwelcome ministrations of her gentle-hearted mate (Anthony Edwards) and slightly oily therapist (Gary Sinise). Ganging up on her, the men insist she is in the throes of "paramnesia," and that, after suffering a miscarriage, she concocted false memories of a boy who never was. Fleeing the kind of chic New York apartment that often figures in this sort of movie, she seeks out a neighbor (Dominic West) whom she recalls as the hunky father of one of her son's playmates. At first, he doesn't remember his own child, but in short order she brings him around, and they team up to uncover the plot against them and their obliterated children.

At this point the film takes an unfortunate turn into "X-Files" territory. Federal agents swarm. A smiling, sinister fellow hovers around the margins of the drama. A cloud drifts by that looks like a throbbing, luminescent doughnut. Could these phenomena be related? Unfortunately, they are, and by the time you learn how, you'll have lost your struggle to suspend disbelief.

As any viewer of "Rosemary's Baby" (1968) knows, even the most farfetched of stories can open a window onto our deepest anxieties, but not if the plot's creaking drowns out the actors. That's what happens in "The Forgotten," which leaves a number of wasted performances in its wake. This is not the first time that the talented Moore ("Boogie Nights," "Hannibal") has wandered into a kitschy production, but it may be the most unfortunate. Her performance in the opening scenes recalls her disturbing role in 1995's "Safe," in which she also played a character we can't help sympathizing with, even though her psychological paralysis verges on the creepy. But the subtleties we glimpse early-on yield to car chases and cheesy special effects meant to distract us from increasingly gaping narrative holes.

Fleeting pleasures are also to be had from actors in supporting roles. As the father who teams up with Moore, West exudes an appealing mix of alcoholic bluster and hidden vulnerability, until he too is swept into the carnival of inanities in the film's third act. Alfre Woodard turns in a feisty performance as the gruff but good-hearted detective who gradually realizes that something's up. Sinise ("Apollo 13"), another class act stranded in this mess, comes close at times to mumbling his lines, as if hoping not to be noticed. And Edwards does a credible job, essentially recreating his role as Dr. Mark Greene on "E.R.," full of good intentions he can't put into practice.

All for nothing. In the end, it's summed up by a villainous character who urges Moore to put her son behind her, seductively cooing, "There are worse things than forgetting." It's true. "The Forgotten" is one of them. * S