For the Sake of the Song 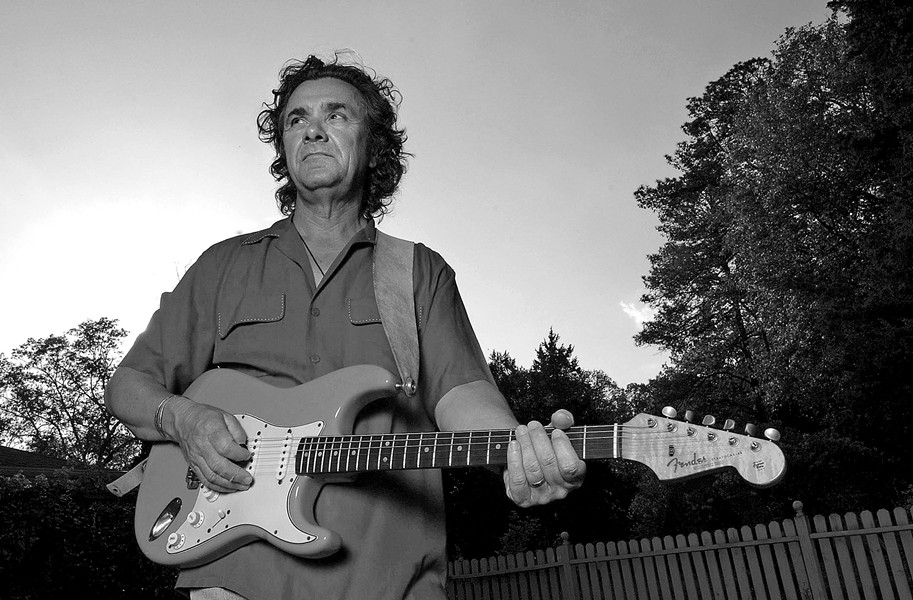 "He's always been the sweetest, most beautiful man," says his wife, Sara, the mother of their two children. "But something was off."

Then one night, his band the Show Dogs was playing to a full room at the former North Side pub, Shenanigan's, when guitarist Jim Wark says things came to a head.

"He would forget the lyrics to each of his songs after the first verse," recalls Wark, a former publisher of Style Weekly. "It was clear to everyone in the room that something was very, very wrong."

Tests revealed that Hatley's health was deteriorating because of fronto-temporal lobe dementia (similar to Alzheimer's). A Vietnam veteran who served in the Navy, Hatley had undergone surgery for prostate cancer in 2005. Because of his exposure to Agent Orange in Vietnam, where he ferried 18-year-old soldiers through the Mekong River into combat, his treatment was covered through his Veterans Affairs insurance. But the family was unprepared for the consequences of a brain bleed that caused hypoxic brain damage when Hatley was under anesthesia for seven hours.

"Prostate cancer, Parkinson's, diabetes, are all recognized," Sara Hatley says. "Unfortunately what my husband has, which is often caused by a brain bleed, was not service connected."

The unenviable task of navigating the complex maze of issues stemming from his health care crisis has fallen to his wife, whose legal fight has lasted years. "It's very complicated, time-consuming and stressful," she says. "Of course, it's terrifying for anyone facing a terminal illness to try to figure out how to pay for all this."

Hatley, 44, quit her information technology job in 2010 to stay home and take care of her husband.

"Once she swung into action, she was incredibly strong," Wark says. "Everything she did, she did for her family. I'm sure she would not want to admit it, but she may have surprised herself by how strong she could be."

As medical costs mounted, Hatley's wife applied for Medicaid. Realizing that her husband needed better care than she could provide at home, she began seeking to increase his VA coverage to enable nursing home care. She was denied twice on the regional level in Roanoke before the case made it to the D.C. Court of Appeals in 2012, where she took her husband to appear with a veteran's service organization. Again the increase was declined, she says: "I was screaming and crying at that point."

That's when government lawyers for the VA reviewed the case and discovered several problems — such as the wrong medical case information being used (among other issues, she says). She's now waiting on a hearing postponed from October – due to a lack of resources during the government shutdown — and lawyers tell her she should know by the end of December whether her husband's ongoing care at Sitter and Barfoot, the memory care facility at McGuire VA Hospital, will be fully covered.

Without her determination, things likely would have been much worse for the veteran singer and guitarist. Hatley, who's played in the long-running bands Big City and the Show Dogs since the early '70s, could have wound up like many former military veterans, lost in the system or homeless.

In 2012, local homeless services nonprofit Homeward counted 218 homeless vets in the Richmond area, 205 of whom were treated at the Daily Planet, which offers a wide range of health and behavioral care services.

"Hers is not an isolated case," says Maureen Neil, chief operating officer of advancement. "[Vets] often experience trauma, or PTSD, brain injury, or some sort of mental health issue that compromises their ability to be independent."

To help support Hatley and his family, the musician's friends are coming together to release a double CD of his work (with outtakes and live cuts) and perform a major tribute concert at the National on Dec. 8.

"His music has always pleased fun-loving crowds," friend Terry Rea says. "Whether in an alley in the Fan District, or out in the country at one of the Usry brothers' annual gatherings, from onstage, Billy saw some legendary parties unfold."

Although Hatley's music never hit it big nationally, he earned the respect of successful peers such as Robbin Thompson, Steve Bassett, and Bruce Olsen — all of whom will perform at the concert, which will be emceed by Chuck Wrenn. Two beloved former Richmond musicians, bluesman Bill Blue and Mike McAdam from the bands of Steve Earle and Mary Chapin Carpenter, are traveling from Key West and Nashville, respectively, to be involved.

"The outpouring from this community has been miraculous," Wark says. "Bruce Olsen offered his studio [Montrose], turning down paid work. For me, it sort of defines the Richmond scene."

Big City will play the first set and will bring out featured guests, and the Show Dogs will play the second set with their own guests. The show will be filmed (using six cameras) for future DVD release, Wark says, and other supporters can buy the two-CD set on CD Baby, through local music stores, or through Hatley's Facebook pages.

"People have been working for months on these songs," Wark says. "Billy's not dead, this is not a memorial. But it is kind of like a local 'Last Waltz' from the old school R&B and roots music world of Richmond."

Longtime Hatley drummer Bob "Rico" Antonelli says that all the musicians are making the same two comments after rehearsing Hatley's material: His lyrics were amazingly dense and full of imagery, and his phrasing was highly underrated.

"As one person put it, 'Billy had a lot to say,'" Antonelli says. "[His] songs could have been recorded by any number of other artists. But he never was able to get the right agent or connection to give him the exposure he deserved. This music business is a real crapshoot, and Billy never rolled a seven. It's a cryin' shame."

Having experienced so much red tape and bureaucratic drama these last few years, Hatley's wife is giving 20 percent of the proceeds to the Daily Planet, as a kickoff to the organization's 45th anniversary.

"I've spent so much time at the VA hospital, and you see these vets sitting there just waiting outside, and it breaks your heart," she says, noting that the Daily Planet works as an arm for the people the VA can't handle. "I feel very blessed for the love and support we've gotten. My biggest takeaway has been how incredibly difficult the process is — and feeling for the hundreds, or thousands, who can't advocate for themselves."

Hatley recently landed a decent-paying new job. But in one of the cruel realities of the health care system, her new income may prevent her from receiving the Medicaid help that's been helping pay for her husband's care ($7,000 a month). And if she can't get the issue resolved with bureaucrats, she won't be able to cover his bill.

"Will I have to leave my job again to make sure he can get good care?" she asks at the end of an interview, before walking back out into a cold November afternoon. S

"Celebration of a Song Writer: the Music of Billy Ray Hatley," featuring Big City and the Show Dogs and guests, will be held Sunday, Dec. 8, at 7 p.m. at the National. Tickets are $37.50 and $25, and available at Ticketmaster and the National.