For the first time since 1993, Democrats gain control of the Virginia General Assembly in historic win 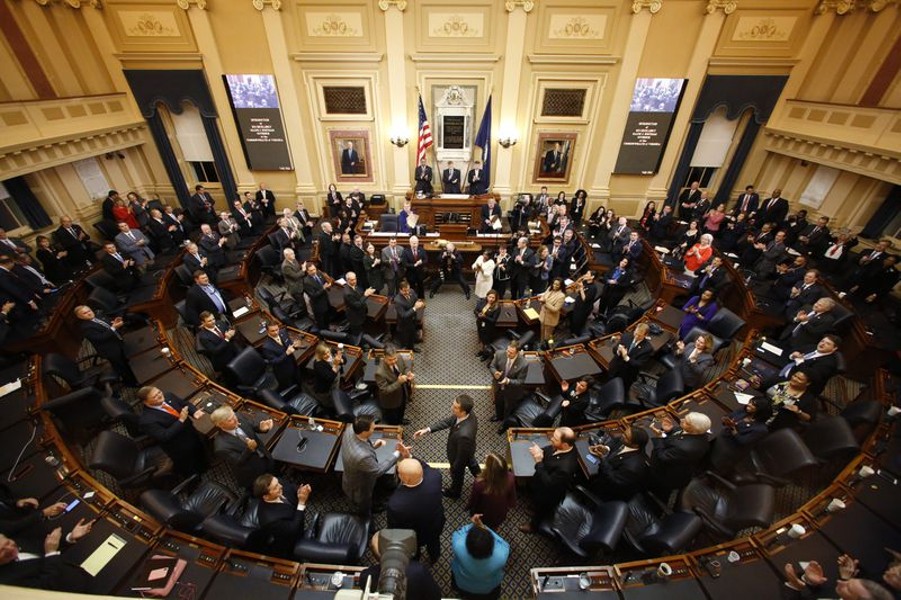 Virginia is now a blue state after a historic win for Democrats, who flipped the Senate and House. Some pundits saw it as a rebuke to the divisiveness and policies of Donald Trump.

Democrats won decisive majorities in the House of Delegates and state Senate in a historic election that sets Virginia on a new course.

The wins put Democrats in control of the General Assembly and governor’s office for the first time since 1993.

And the Democrats of today are a new breed, far more united than in the 1990s on gun control and abortion. They have rallied around the idea of making voting easier and ratifying the Equal Rights amendment.

Democratic victories in two Senate districts in suburban Richmond and one in Loudoun County gave them at least 21 of the chamber’s 40 seats, while the GOP held narrow leads in two Virginia Beach districts targeted by by million-dollar-plus efforts to flip to blue.

A new 54-or-more-seat Democratic majority in the House came in part from gains in two House districts on the Peninsula, including the Newport News one where a tie vote and a drawing of a lot gave the GOP a 51-49 majority in 2017. Republicans held slight leads in two Beach seats Democrats had targeted with the final precincts still to count.

One of Virginia’s top Republicans hung onto his seat, while another lost Tuesday night.

While Speaker of the House Kirk Cox retained his Richmond suburban seat, the GOP’s lost majority leaves him without the critically important power to name people to committee to direct the course of legislation.

Senate Majority Leader Thomas K. Norment Jr., R-James City, was re-elected. But like Cox, he will lose most of his power to steer or block legislation with the new Democratic majority.

Throughout the election, Democrats sought to tie Republican candidates to President Donald Trump, warning them that a vote for Republicans would mean siding with the gun lobby and reducing access to affordable health care, including birth control.

After Republicans ended the July special session on gun control called by Democratic Gov. Ralph Northam by pushing all the bills to the state Crime Commission, Democrats ran on a promise of passing more strict gun control such as universal background checks, extreme risk protective orders, or “red flag” laws, and bans on high-capacity magazines and assault weapons.

They also vowed to safeguard Medicaid expansion, pass a higher minimum wage and make Virginia the 38th and final state to ratify the ERA.

Controlling both bodes means Democrats will also be in control of redistricting for the next decade. An effort this spring to form an independent redistricting commission and take some of the map redrawing power out of legislators’ hands needs the lawmakers’ approval next session and has to pass a ballot referendum next November to become law.

Stakes were especially high in those districts that earlier this year were deemed racially gerrymandered. The new court-ordered maps made several districts, including a handful in Hampton Roads, more competitive — and often more Democratic.

On the Peninsula, Democrat Martha Mugler flipped a reconfigured Hampton and Poquoson 91st House district, after the retirement of one of the most loved General Assembly members, Del. Gordon Helsel, R-Poquoson.

Democrat Shelly Simonds defeated Del. David Yancey, R-Newport News. He was returned to Richmond after a tie vote in 2017 after he won a lot drawing.

Democratic victories in the last GOP-held seat in Fairfax County and a race in the Frederickburg suburbs also helped secure the House majority.

Democrats held on to the 15 House seats they won in the 2017 blue wave election.

Turnout was higher than expected in the usually sleepy off-off year elections.

Both parties had help in the last few days of the race from political leaders. Vice President Mike Pence took the stage in Virginia Beach Saturday with several GOP statehouse candidates; Northam criss-crossed Hampton Roads over the weekend.

Results are unofficial until canvassed.