For Latina mothers, a new South Side thrift shop is more than just a store 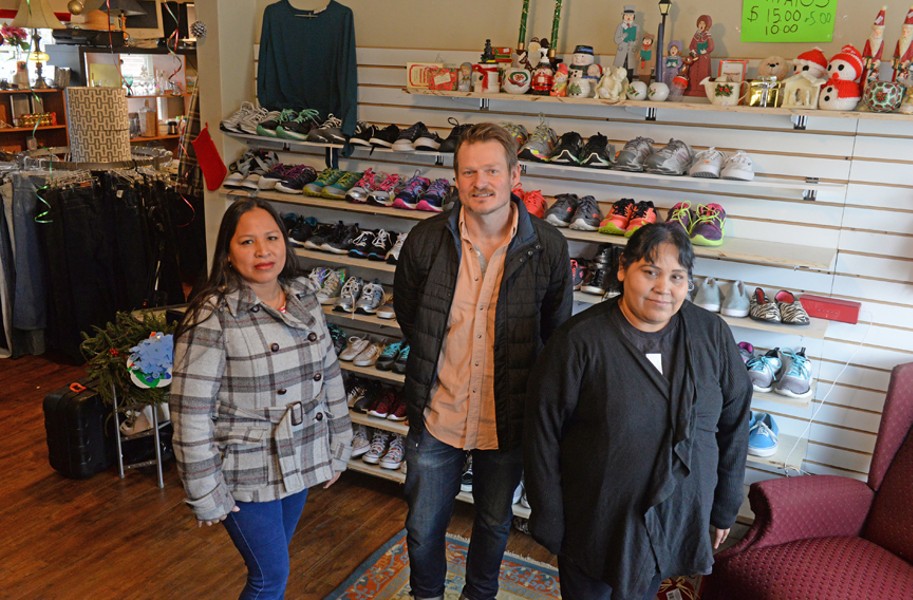 Maria Escalante used to spend a lot of time cooped up at home. A mother of nine from Mexico who's been in Richmond for 20 years, Escalante lived in fear before her abusive domestic partner went to prison. Now, the soft-spoken, determined 46-year-old splits her time between volunteering, cheering her children on the soccer field and co-running the newly opened Richmond Conexiones thrift shop.

"I was always closed up, I wasn't ever going out because in that time I was a victim of domestic violence," says Escalante in Spanish, with Richmond Conexiones founder Dustin King translating. "But now I like to volunteer, I like to be involved with the community."

The thrift store at 3225 Broad Rock Boulevard is the latest initiative by Richmond Conexiones, a nonprofit that serves the ever-growing community of Latinx, a gender-neutral term for Latina and Latino, families in South Side with outreach efforts such as a soccer camp, backpack donations and free summer lunches. Revenue from the shop will fund existing programs, King says, and the ultimate goal is to raise enough money to create and support a community center.

Escalante, whose son got her involved with Conexiones after volunteering for the lunch program, says the thrift store has been a dream for years. She runs the shop with King and co-worker Raymundo, who preferred to be identified only by her last name for this story. Escalante wants it to be a place for women like her — hard-working single mothers who have survived domestic violence and need a safe, fulfilling way to support their children. Eventutally, the shop will offer short-term employment for women as they get on their feet and gain independence.

"We started this store so that we can help people so they have a stabler life," Escalante says. "It's my goal to empower these women, so that they find a way to recuperate their self-worth and believe in themselves. So they realize that they can be an example for their children. And that's why we're here, asking for cooperation, so we can realize dreams, not just mine, but other people's."

Racks of gently worn clothing and shelves of secondhand shoes, accessories, books and home goods line the cozy, tidy space that feels equal parts home and store. On a recent visit, a family of four clad in rain gear chats warmly with Raymundo, carefully perusing a row of sweaters and a selection of athletic shoes.

"I like to offer good products at a low cost, things that in other places would be more expensive," Escalante says. "And I like that the people are able to buy nice things. We all deserve nice things."

Raymundo, a single mother from Guatemala, has been in Richmond for 13 years. After escaping the violence and poverty of her home country and surviving years of abuse in her home, she says she's not afraid of anything. Quick to laugh and eager to connect with people, Raymundo is energetic at the shop, greeting customers and keeping the place spotless. She and Escalante share management responsibilities, and Raymundo says making sure it "looks magnificent" is one of her top priorities. "Nothing is difficult" for her anymore, she says, and she sees running the shop with King and Escalante as an opportunity to try something new and expand her community.

She may be fearless, but when asked about her five kids, her demeanor changes. Her expression and her voice soften and she speaks about her children with a reverent tone and glistening eyes.

"My motivation is them, to fight and to struggle, so they can be well and have a home. For me, at one time I didn't even have shoes, but I want them to have those things. The truth is that I've suffered a lot, especially with my older son, because he's seen my tears," Raymundo says, lamenting that the 11-year-old "can't forget the things that have happened," like the physical abuse at the hands of his father. "There have been times that we haven't even had food, haven't had a home. It's what motivates me. It's them that suffer the most."

Raymundo's dream is to move the kids and the family's pet turtle, Junior, out of an apartment and into a house with a yard.

The Richmond Conexiones thrift shop is open 11 a.m. to 7 p.m. Mondays through Fridays, and 10 a.m. to 6 p.m. Saturdays and Sundays. Donations are accepted at the store, and pickup service is also available. Financial contributions can be made at gofundme.com/conexiones-thrift-store.