Virginia Commonwealth makes some forward progress in the pigskin department. 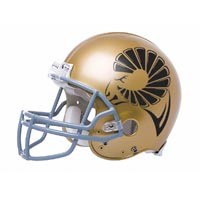 For years, football has been little more than a punch line at Virginia Commonwealth University. The bookstore sells T-shirts boasting: “VCU Rams Football. Still Undefeated.” When the topic came up under the former president, Eugene Trani, he dismissed the prospect of fielding a team out-of-hand. “He always said, ‘Not on my watch,'” recalls Norwood T. Teague, the university's athletic director.

But the mood appears to be changing. After years of pressure from students and alumni, and the hiring of new president Michael Rao last year, there's renewed interest in exploring the possibility, Teague says.

“It's definitely possible,” he says. “I'm sure in the near future we will probably undergo a study to look at it more in depth.”

Discussions have come up recently with the University of Richmond vacating old City Stadium and longtime rival, Old Dominion University, giving the university a blueprint of sorts. ODU fielded its first football team a year ago.

There are built-in advantages: VCU's basketball team already plays in the Colonial Athletic Association, which boasts what many consider to be the best football conference in the Football Championship Series, the former Division I-AA. With more than 32,000 students, VCU is the state's largest university and has a built-in fan base and financial structure. A team would cost between $2 million and $4 million a year, Teague says; ODU funded its team by tacking on additional student fees, about $9.80 per credit hour, or about $300 per student, and had little problem raising money from alumni to get the program started.

Still, there are other startup costs, namely for practice facilities and, perhaps renovations to an existing facility, such as City Stadium, or the construction of a new stadium altogether. ODU spent more than $34 million. Moreover, the recent state budget cuts and overall economic morass makes the current environment a bit tough.

But football is on the table. And that's a big step forward.

“There are a lot of moving parts. We've looked at a lot of those things and discussed them, even in the last six months,” Teague says. “Dr. Rao's here and he's been in the football environment. … He thinks we've got to look at it and take everything in the conversation and be smart about it.”