Food Review: YaYa’s Cookbook Brings Family Back to the Kitchen

by by Matthew Freeman 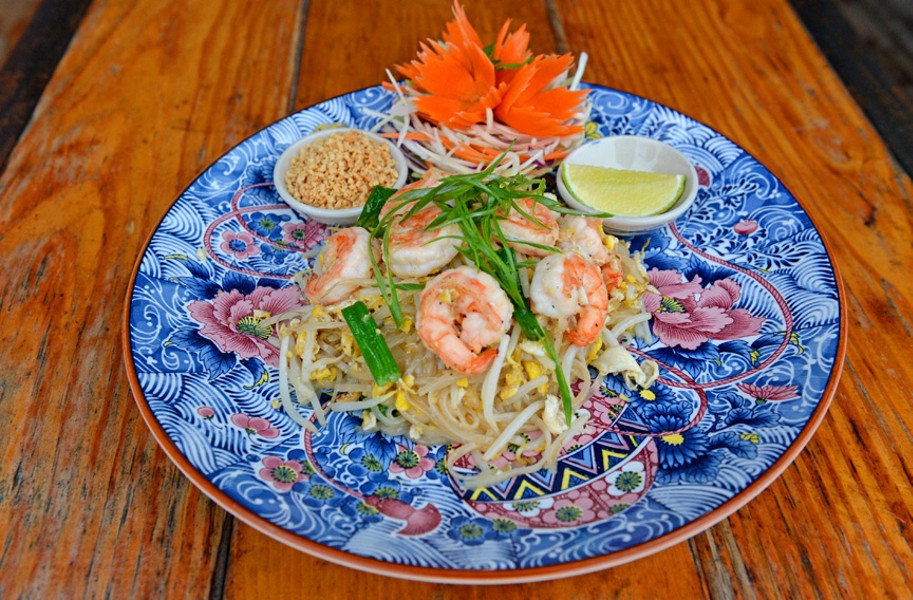 Scott Elmquist The pad thai at YaYa’s Cookbook is of the best renditions of this classic dish in Richmond.

Cooking, even in the restaurant world, can be a family affair. Such is the case in Short Pump's YaYa's Cookbook, named after the owner's mother and grandmother, who inspire the restaurant's mostly Thai cuisine. Joe Kiatsuranon, who also co-owns Sabai with Brandon Pearson, opened the spot with his brother, Sonny, and his mother, Sukanya Palaart, who is the namesake of Mom's Siam in Carytown. The two brothers also own My Noodle Bar and Pik Nik.

The family agreed to pitch in and help with YaYa's, which opened in the former Osaka Sushi & Steak, which was in a strip mall near Short Pump Town Center. Of all the family members, Joe has shown the most flair for interior decorating. Like Sabai, YaYa's transports you somewhere exotic, if indistinctly so, when you enter. Quirky touches such as individual wooden swings at the sushi bar and a bed that converts into a space for a DJ are just the beginning of the heavily wooden-themed interior. You quickly forget the suburban setting when you enter.

As for food, the menu is expansive and a tad overwhelming. Featuring street food, entrees, curries, a Japanese section, a vegan section — not to mention desserts — navigating the offerings is not for the indecisive. On my first visit, my dining companion and I opt for the offering that puts the most variety on one plate.

The som tum tad ($30) Asian street tray is a platter piled with papaya salad, plain noodles and sticky rice, plus a number of proteins — grilled chicken, a couple of varieties of sausage, crispy pork and a boiled egg. We keep trying to find a combination that makes the food sing, but we're ultimately disappointed. Generally lacking in flavor and inspiration, nothing on the tray stands out.

More familiar Thai dishes are far more successful. The tried and true pad thai ($13.50-$16.50) is one of the best I've had in Richmond, with just the right balance of sweet, sour and pungent. Curries — red, green, panang and several others — are likewise excellent, with their complex mix of spices skillfully executed. The nom ya noodle ($16.50), for example, takes salmon and rice noodles and puts them in a mildly spicy coconut curry broth.

YaYa's, for all its fidelity to family, does not stick to Thai dishes alone. The menu careens around Asia from a Japanese section with a healthy sushi selection, to Laos, with Hong Kong and mainland Chinese style dishes also available. And I hear rumors of a hibachi grill in a private dining room.

Straightforward sushi options include sashimi and nigari, and simple maki rolls, or you can opt for the creative, overstuffed and over-sauced versions. The YaYa's roll ($15) pairs salmon tempura with avocado, then tops the roll with an overwhelming combination of filet mignon, both spicy mayo and eel sauce, and then, just to keep driving the excess train down the tracks, finishes off it with scallions and tobiko. The resulting roll creates confusion, which, even with all the rich ingredients, leaves you feeling underwhelmed.

This over-the-top but underwhelming sushi roll is the perfect metaphor for YaYa's Cookbook. More does not mean better. More dishes on the menu lead to more inconsistency in quality. And more traditions coming out of the same kitchen fail to show the best of any. For my money, I prefer restaurants that specialize and cook what they do best. In Japan, for instance, most restaurants serve only one kind of food — diners don't order tempura at a sushi restaurant or vice versa.

And yet, despite its missteps, with more focus, YaYa's could become a great Short Pump outpost of Richmond's Thai restaurant family dynasty. S

CORRECTION: This review mistakenly stated that Frank Oley designed the cocktail program for YaYa's. Oley has no association with the restaurant at this time.