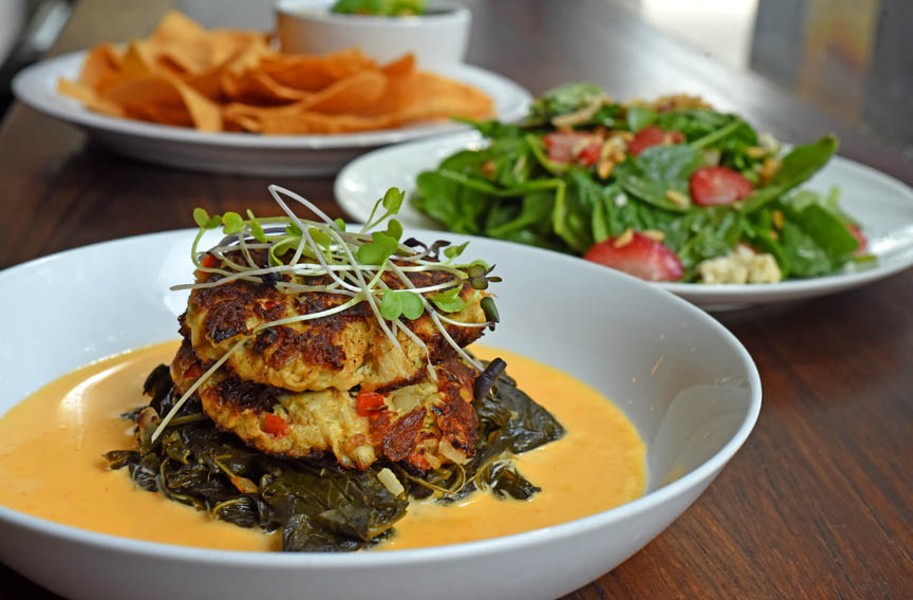 To paraphrase Meat Loaf, the master of food-named rockers, one out of three ain’t bad.

Back in January when chef Owen Lane left Vagabond, co-owner Dave Peterson went on record acknowledging that while the kitchen couldn’t continue in Lane’s stylistically unique manner, he intended for the food to be every bit as good. The goal, he said, was to deliver terrific bar food that was more approachable.

But a more approachable menu might better suit the wildly varying music crowds stopping by for bite before a show next door at the National. And there’s not a thing wrong with a restaurant aiming for greater mass appeal, although my three visits served up a mixed bag.

Even though their 15 minutes of vegetable fame should be long over, flash-fried Brussels sprouts ($6) shine not only due to their lightness but because of the subtly complementary drizzle of balsamic. And while I’d still prefer the general to work magic on sweetbreads, General Tso’s cauliflower ($6), arranged on a pool of sticky sweet chili sauce, appealingly highlights the meaty texture of the vegetable inside a golden tempura crust.

If you’ve come for that terrific bar food, flatbread ($10) probably isn’t it. The crust is thick, doughy and lacks salt, while the beer-cheese dip used as sauce casts a bland pall over solid toppings of caramelized onions, house-made sausage and queso fresco.

When it comes to the bedrock of bar food, wings ($8 for six, $10 for a dozen) — more accurately, drumettes and wingettes — are available with a choice of spicy barbecue, Alabama white or Thai sweet chili sauce. We go with the latter, only to yawn at underwhelming wings with barely a hint of flavor.

That’s an ongoing theme, it turns out. In a blind tasting of pork carnitas and fish tacos ($5-$13), you’d be hard pressed to tell the difference except for texture. We marvel at the absence of any sort of taste. Inexplicably, the accompanying pico, queso fresco and salsa verde provide no more discernible flavor than the lackluster meat does.

With a silent thanks to the gods of spring, the flavor pop of fresh peas is the undisputed star in a dish of gnocchi carbonara ($16), although the sauce is one note and the gnocchi unpleasantly gummy.

Salads fare better and the apple pecan ($10) presents a satisfying plate of arugula and mixed greens, blue cheese, apple slices, pecans and crispy brioche made luscious with the earthy sweetness of balsamic vincotto vinaigrette. In the mood for beets? Avoid the kale and beet salad ($8) because the shredded beets are so tiny and in such short supply you could blink and miss them. But if you’re craving an assertive kale salad, this one oozes charm with alfalfa sprouts, crispy deep-fried chickpeas, feta and, yes, occasional shreds of beet, all satisfyingly tied together with a green goddess dressing worked into every leaf.

A single round of pie crust crowns a lamb pot pie ($18) composed of peas, mushrooms and wonderfully toothsome carrots almost imperceptibly bound by gravy — a modern take on a classic comfort food that lacks the heavy breadiness of traditional versions. Whether that’s good or bad is a matter of personal taste.

The Cuban sandwich hits a solid home run ($13). Vagabond’s riff on the classic marries citrus-based mojo-marinated pulled pork with the fatty goodness of mortadella, bread and butter pickles, swiss cheese and mustard. Granted, it may not please the purists who insist on ham and dill pickles, but my taste buds went home happy.

It must be tough to staff a place like Vagabond, where one night the place is filled to capacity with crowds in fingerless gloves and Boy Toy belts awaiting a Legwarmers concert, while the next night any table in the house is on offer because they’re all conspicuously vacant. Service is friendly, if a tad slow, even on sedate nights, but that’s hardly a surprise given the two-story layout and subterranean kitchen.

Is Vagabond delivering terrific bar food? In some cases, yes. Is the menu more approachable? Sure is. But there ain’t no way it’s every bit as good as Lane’s. Food warriors may miss his winning style, but chances are, concertgoers won’t. S