Food Review: The Stables at Belmont Elevates the Neighborhood Restaurant 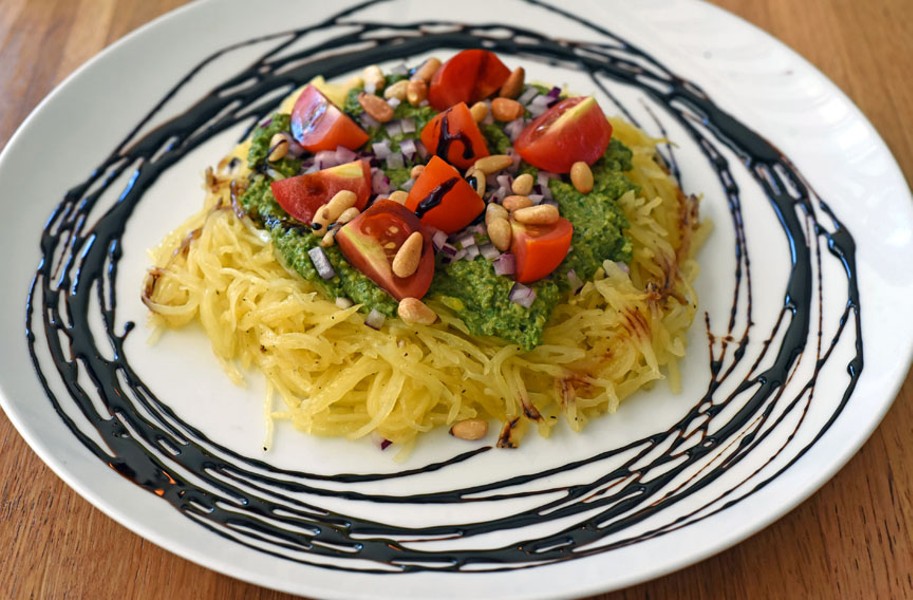 Scott Elmquist The Stables at Belmont’s vegan spaghetti proves that fresh, seasonal and meatless have the the power to seduce carnivores.

One sure way to know you're at a neighborhood eatery is when the chef comes out from the open kitchen behind the bar to greet new arrivals.

The Stables at Belmont, in a building that was once the stables for the Richmond police, occupies the space that first put neighborhood eaters on notice in 1991 when Zeus Gallery Café opened. After nearly a year of renovation, it's been updated with fewer booths and more tables. Now, only Zeus' footprint remains.

Those who prefer a bar stool for dinner will have more opportunity to do so with a longer bar that seats 10 and an impressive mirrored back bar announcing a committed cocktail program ($8-$14) with a focus on bourbon and scotch. Drink names — Appaloosa, Canter and Gallop — nod to the building's origins.

Chef Evan Campbell worked in Boston and New Orleans and lands in Richmond with the intention to do higher-end New American cuisine using the North and South as inspiration. It probably didn't hurt that his mother lives just down the street from the restaurant, either.

His instincts are spot on in a New England-style lobster roll ($20) that puts the emphasis on an abundance of meat, while staying light on the mayonnaise and seasonings to allow the sweet meat to shine atop a buttered, split bun. That his Southern bona fides are just as solid is evident in a rustic yet refined dish of scallops ($13) over perfectly braised collards and crispy polenta with enough rich bacon butter to infuse every bite.
For a winning starter with a lighter touch, consider the street corn salad ($10) of baby spinach, cucumbers, grilled corn, black beans and tomato sparked by pickled mango, Cotija and cilantro crema — the rare salad that causes conflict among dining companions for the last bits.

Equally mouthwatering are toasted shishitos ($8), which get the glamour treatment thanks to edamame, bell pepper and crushed peanuts, not to mention pools of soy aioli to cut the heat of that unexpected hot pepper on the plate.

Less likely to get a second try down the road are the bland tuna tartare ($13) with a muted ginger citrus marinade. I won't be considering the rosemary and garlic lamb lollipops ($15) again either. Given a choice of pink or not pink, I opt for the former and still the chops are noticeably dry. With the exception of an $18 vegetarian offering, entree prices cost from $21 to $34, and that makes expectations understandably high, even for a neighborhood place.

For those diners who say they never order chicken in a restaurant, you're missing out when the yardbird is as satisfyingly seasoned and crisped on the outside — and as juicy on the inside — as the Stables' roasted half-chicken ($21) in garlic pan sauce proves to be. That it arrives accompanied by a stellar summer succotash should make any Southerner's taste buds swoon.

Proving that fresh, seasonal and meatless have the power to seduce even carnivores, vegan spaghetti ($18) left little to be desired with its appealing mélange of spaghetti squash dotted with savory arugula pesto, crunchy toasted pine nuts, sweet cherry tomatoes and piquant red onion over the deep sweetness of a balsamic reduction. Tasting is believing.

With nods to both the ocean and the almighty pig, cioppino ($26) rounds up shrimp, scallops, clams, salmon and andouille sausage in what tastes like a buttery, clam-based broth with onion and tomato. No complaints here about the andouille having a nice kick to it, but with a bowl of rich seafood broth, a single piece of grilled garlic bread seems woefully inadequate. More bread, please, chef. Southerners have extensive sopping needs.

On all three of my visits, both dining rooms felt lively, if a bit brighter than necessary. Service tilts friendly, although it slows once food is delivered, and it isn't always easy to get drink refills or the check once plates are cleaned.

I've heard from friends in the Museum District how excited they are about having a neighborhood restaurant again. Although they'd probably just as soon keep the Stables to themselves, those from farther afield will be happy to know there are 10 parking spaces behind the restaurant if things are tight on Belmont Avenue.
Just keep your food commentary polite. You may be sitting next to the chef's mom. S