Food Review: The Spirit of Caliente Lives on at the New Sheppard Street Tavern 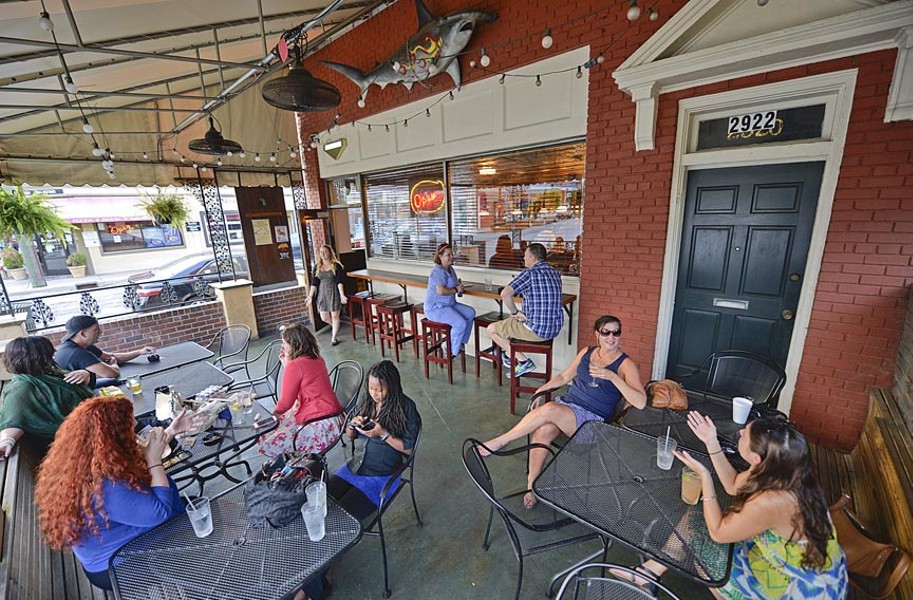 Ash Daniel The patio at Sheppard Street Tavern is a stalwart of the Devil’s Triangle, an oasis for smokers, drinkers and dog owners.

Call it baptism by smoke on the patio. A server reaches down to deposit a black plastic ashtray on the table before even greeting us, sending a clear message: This patio welcomes smokers, as well as canines, with a website announcing “Friendly dogs welcome,” and wagging tails sighted on several visits.

When owner David Bender closed Caliente to re-brand and refurbish as Sheppard Street Tavern, heat-heads worried whether the stupid hot-wings would make the transition, while smokers fretted about changes to the cigarette-friendly patio. Neither have cause for concern. New booths and tabletops freshen the space, but let’s get real here, even semiregulars could navigate it blind drunk.

And speaking of inordinate heat, it’s hardly surprising that Bender kept the Caliente stupid wing challenge ($20), the same wings that brought the Travel Channel’s “Man vs. Food” to town to check out what are billed as the hottest wings around. The rare customer who successfully finishes the challenge can choose a refund or an “I’m with stupid” T-shirt.

So color me surprised when, on my first visit, the table next to us orders them, not as a challenge but because three guys are planning to eat them to prove their manhood to each other. The results aren’t pretty. One young man barely finishes half a wing before losing the ability to speak. A minute or so later, the guy next to him starts crying — and not just onion-chopping tears, but great crocodile tears he can’t control.

“Why are you doing this for the, what, third time?” a woman walking over demands of the well-padded middle-aged man with them, who finishes his first wing but manages only a bite of the second.

Unable to speak, he holds up four fingers, confirming that he’s trying stupid wings for the fourth time. Welcome to the new Sheppard Street Tavern, where old habits die hard.

Semi-upscale pub food was the goal, and it’s a fair assessment of the menu of appetizers, burgers, hot dogs, sandwiches and salads. Eaten on the sunny patio, fried plantains ($6) conjure up a taste of the islands, amplified with tamarind tartar sauce to supply the salty and savory balance to the towering sweetness of plantains.

With many of its leaves past their prime, a spinach salad ($9) speaks to sticking with more obvious pub favorites, as do eggplant “meatballs” ($8.25) drowning in a bland marinara for a dish guaranteed to discourage a vegetarian’s second visit.

Figuring a neighborhood tavern would necessarily do a strong brunch, my second visit confirms it. Open wide for chicken and waffles ($9.50), a sandwich that pairs a fat fried chicken breast with smoked cheddar between sweet potato Tater Tot waffles swabbed with maple brown sugar glaze.

A breakfast slider combo ($9.50) delivers all the pig in miniature, with one each of bacon, ham and sausage with melted cheddar on top fronting a plate of eggs your way and chunky hash browns dense with peppers and onions.

A quarter-pound, all-beef Coney Island dog ($6.50) is piled high with onions, red cabbage and apple kraut, as well as chili and peppers — and the dog itself boasts standout flavor. But a cheeseburger ($11) with sauteed onions arrives gray and dry rather than medium, as requested.

So overcooked as to require sawing with a steak knife, Jamaican jerk pork chops ($17) need more than dark rum glaze and pineapple salsa to resuscitate them. Yet when I bring my leftovers home to a 20-something neighbor, he raves about the chop, collards and potatoes, unconcerned with the cut’s dry texture.

My visits find service to be leisurely, even uninformed on occasion. By my third time around, I certainly don’t expect to spot rosé on the wine list, but when I do, I’d hope my server would know if it’s dry or sweet without having to ask three people.

Truthfully, though, all that proves is that I’m not the target customer for this spot. Sheppard Street Tavern is a stalwart of the Devil’s Triangle, an oasis for smokers, drinkers and dog owners — and it’s a boisterous neighborhood hangout for good reason. It gives regulars exactly what they want, morning, noon and night, which I’d call the definition of a successful restaurant. S