With outsized portions and an expansive menu, there ain't no hunger games here. 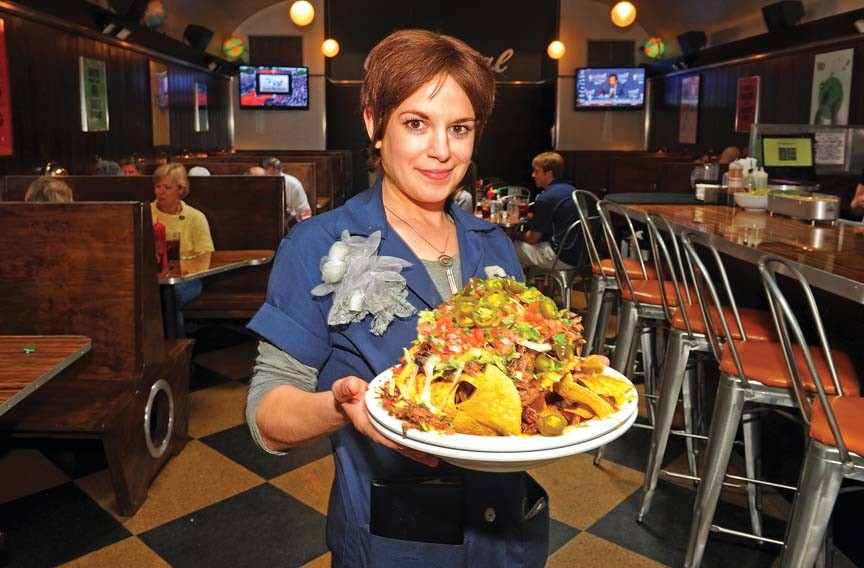 Shuttering Philip's Continental Lounge on Grove Avenue was a tough sell to many neighbors of the 70-year-old institution. But it hasn't taken long for its replacement, Johnny and Katrina Giavos' shiny new Continental Westhampton, to win over the Libbie-Grove intersection with its retro vibe and accessible American fare at reasonable prices.

At peak hours it can be too crowded to fully appreciate, but the space has been thoroughly gutted, reworked, and stamped with a mod Americana flair that is the brainchild of son Constantine Giavos. Everything is new except the floor and ceiling: wide wooden booths, a bamboo-topped bar, leather and aluminum chairs and bar stools, televisions in the corners, and globes dotted around the room. Servers wear '50s-style diner smocks emblazoned with "CW," and the wine and beer selection is all-American.

If you come early in the day, instead of being entertained by the tipsy nighttime hordes downing desperados (guava margaritas with a jalapeño kick), you can take in the kitschy slogans on the walls, such as "Give us this day our daily dog," and a slew of vintage-looking knick-knacks above the bar.

It's difficult to imagine how the small kitchen can produce every item on the seven-page menu. The lineup consists mostly of straightforward crowd pleasers, and many that patrons of other Giavos establishments will recognize, but the sheer volume is impressive. The offerings include nachos, wings, salads, sandwiches, burgers, steamers, a lobster roll, pizzas, knife-and-fork entrees, a slew of veggie sides, egg creams, milkshakes made with Homestead Creamery ingredients, and a dynamite baked Alaska, created by executive chef Stuart Lowrie. You won't find cutting-edge kitchen artistry here, but you will get plates piled high with stick-to-your-ribs comfort food, with plenty of throwbacks and a few fresh twists — and maybe a little heartburn later.

Of the appetizer selection, the nachos ($8.25) are a stand-out, if intimidatingly mountainous, with multiple layers of cheese and toppings. Adding the tasty beef brisket for $2 is a must. Fried oysters also are done well, and accompanied by a bright, herby rémoulade. The salads are more than a full meal. The Three Chopt ($9), an authentic version of the classic chopped egg salad, lives up to its distinguished namesake, aside from the overcooked eggs.

The eat-with-your-hands category encompasses most things that can be held between two slices of bread — or pancakes — and includes things as varied as zucchini falafel (fresh, flavorful toppings, but the chickpea fritters are tough) and the home run burger (a $10 belly buster of brisket and poblano barbecue on a beef patty). The Grove chicken grinder ($9) is a hearty handful of grilled chicken, barbecue, pepper jack cheese and slaw on the heavenly house-made rolls. For sides, both the classic and the sweet potato fries are excellent.

The salmon Shaheen ($16), dressed up with pomegranate molasses, wild rice and curried cauliflower, and named after the original proprietor of Phil's, proves the kitchen can turn out a proper entree and one that won't put you in the red on MyFitnessPal.

Considering the rest of the menu, it seems ironic that the pizza should be given a healthy twist, but, as whole-wheat pizza crust goes, this version isn't bad. The Truman ($8), topped with unadorned kale, broccolini, peppers and onions, could use more seasoning.

Unlike dinner on the weekends, brunch is a low-key, kid-friendly affair, and allows you the rest of the day to work off the calories. You'll find many of the same sandwiches and salads as on the lunch and dinner menu, as well as popovers Benedict, breakfast nachos and maple-sausage corn dogs, which are disappointingly bland until dunked in syrup. Patrons of Stella's will recognize the huge cast irons — well-oiled plates of sautéed potatoes and lamb or veggies topped with two fried eggs — hangover food at its finest. When ordering the Belgian waffle bananas Foster, ask for the rum sauce on the side so the leftovers can be taken home as an ice-cream topper: double deliciousness. S