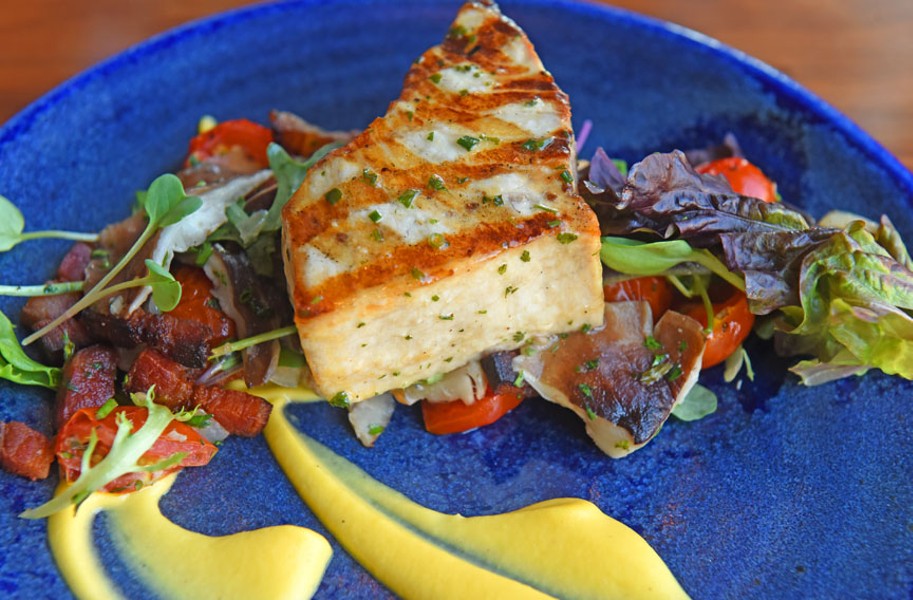 If you didn’t know chef Walter Bundy’s history, you could be forgiven for thinking his new restaurant, Shagbark, simply takes a page out of an increasingly formulaic farm-to-table playbook for restaurant success.

Bundy, as executive chef at the Jefferson’s Lemaire for 15 years, helped establish the farm-to-table trend locally long before it was standard. Many of the chefs he’s mentored, including Charleston, South Carolina’s Sean Brock and countless Richmonders, have taken his fidelity to local ingredients into their kitchens.

This local influence is everywhere at Shagbark — the farm names throughout the menu, the hunting and fishing themes in the décor, and the honey from Bundy’s own bees that transforms the salted butter and Billy bread into a must-have at any meal.

Bundy has said he wanted a place of his own to showcase area ingredients in a welcoming environment, and he’s achieved that in the somewhat unlikely suburban location of Libbie Mill Midtown.

This new development, until recently home to the doomed Southern Season gourmet grocery store, proved to be the blank canvas that’s allowed Bundy to build his dream restaurant from scratch.

Wood themes dominate, most impressively with a communal table carved from a shagbark hickory tree from Bundy’s family farm. Antlers and wildlife pictures abound, but modern design elements, including creative light fixtures and plenty of windows, keep it from feeling like a rustic hunting lodge.

Three chicken-fried oysters ($11) arrive on a small portion of grits with a punchy dill pickle remoulade and are the perfect opening to any meal. Hopefully they’ll make their way onto the regular menu and off the extensive specials menu. A brandied mushroom bisque ($7), rich with cream and studded with tiny cubes of compressed apple and roasted sunchokes, is as decadent and comforting as you’d hope from a soup on a blustery winter day.

The menu is seafood heavy, and those prove to be a few of the most consistent and best choices to make, from the truly jumbo scallop appetizer ($11) to swordfish from the Outer Banks ($24).

Crab cakes ($28), a Virginia standard, escape the ordinary with a smear of carrot butter and tarragon oil that lends some earthy richness. The dish encapsulates Shagbark’s motto: “Stay rooted but branch out.”

Virginia ingredients are treated with just a hint of playful inventiveness. Another example — a duck breast seared in a cast-iron pan ($29) — sits on a sticky sweet pomegranate gastrique and a whipped hazelnut mousse that adds a complex interplay of flavors to the mildly seasoned, medium-rare meat.

My favorite Shagbark meal is brunch, where lobster, oyster or fried green tomato Benedicts share menu space with hearty options such as the up South fry-up, a Southern twist on an Irish breakfast.

Start with the brioche sticky bun ($7) — a sweet bread with just the right ratio of cinnamon and icing, along with hazelnuts and crumble to add flavor and texture. A pastrami-spiced duck confit hash ($15) is a standout, with an abundance of duck and richness from a perfectly poached egg balanced by sweet notes from caramelized onions and sweet potatoes.

The biscuits and shrimp gravy ($15) mash-up shrimp and grits with biscuits and gravy: A rich shrimp-studded gravy smothers two slightly sweet and flaky biscuits. Despite the thick-stalked arugula accompaniment that feels like an obligatory healthy add-on, this dish represents the genius that makes Shagbark a destination restaurant. It’s expertly executed, simultaneously novel and retains comfort-food status.

But not everything is perfect. The house-made potato gnocchi ($20), one of only a few vegetarian options, disappoint with underdeveloped flavors and a texture more like mashed potatoes than the traditional Italian classic. Similarly, a chocolate croissant bread pudding ($8), despite its promising description, turns out to be pieces of chocolate croissant swimming in an alcoholic crème anglaise and, somehow, is less than the sum of its parts.

Nevertheless, with friendly and attentive staff expertly managing an already popular restaurant, plus an excellent bar program with an extensive wine list, and both throwback and creative new cocktails, Shagbark is the perfect marriage of accessible and inventive, local but expansive. It’s familiar, but there’s enough to intrigue to keep you coming back. S