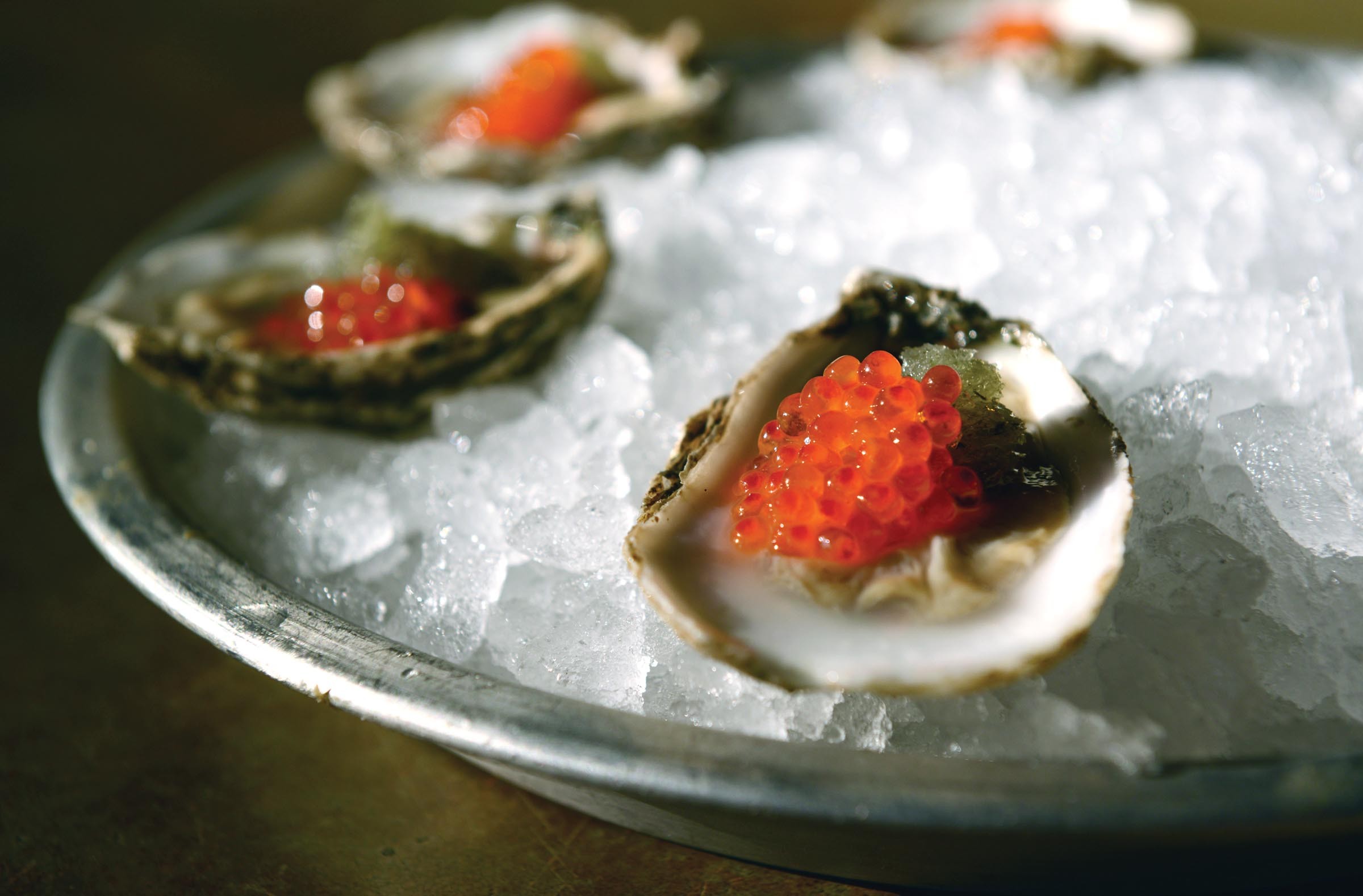 Rappahannock may be the game changer for Grace Street.

The latest outpost of Rappahannock River Oyster Co. has positioned itself to appeal to seafood lovers. But the abundance of General Assembly types and suits at lunch and after work attests to the sense of it as a place for movers and shakers too.

Because the owners took over two storefronts, Rappahannock is atypically square, noteworthy in a city in which so many restaurants are long and narrow. The defining three-sided bar in the center announces itself as the heart of the place, with an oyster shucker busily at work in one corner.

Oysters are understandably all over the menu, both on the half shell ($2 each) and in an array of dishes. An order of oysters and pearls ($18) brings six oysters topped by nori granita and trout caviar, sort of a grown-up Pop Rocks. Baked Rappahannock River oysters ($15) nestle in the shell with black leaf kale, Benton's bacon, and a dollop of celery root cream on top, an appealing option for those reluctant to go raw. Rockfish and barcat oyster bourride, a garlicky stew with fennel and potatoes topped by a poached egg, is wonderfully satisfying on a cold night.

Diners who aren't fans of bivalves will find other options on the menu. Tuna crudo ($10) has a buttery feel and delicate flavor, enhanced by preserved lemon, Castelvetrano olives and Calabrian chilies. When our order of grilled Outer Banks shrimp with green olive aioli ($11) is placed on our table, it comes with the server's advice to suck the heads because the juices are really good. It's a worthwhile reminder.

Meat and potato lovers will be pleased with wood-grilled hanger steak ($22), served with a corn bread pudding so good the restaurant should become known for it, sweet potatoes, candied pecans and red-wine sauce. A truly unique dish is the roasted-root-vegetable salad ($9) of parsnips, carrots and beets with mustard greens, pickled onions and grated bottarga with cumin vinaigrette. Think you don't like parsnips or beets? Think again.

At lunch, barcat oyster chowder tastes of nothing but cream, so the oysters' natural brininess is absent and missed. Local fluke seviche ($10) has some heat from Thai chile and spice from cilantro and coriander, but it's the juicy pomegranate seeds that surprise and delight. Rockfish brandade comes in an enormous crock, but the rich mixture of fish, potatoes and olive oil leans toward the salty after the first few bites.
Dessert is limited to two choices and a cheese plate ($9) with Pennsylvania, Oregon and Maryland varieties, brandied apricot preserves and exquisite marcona almonds. Buttermilk panna cotta ($7) balances the tang of the buttermilk with blood orange syrup and candied orange peel when true sweetness is required.

Rappahannock's music vibe varies according to the time of day. Multiple play lists are available for the staff to choose from, but there's a pecking order. Days mean old-style country, with classic rock and blues at dinner and even a little punk later on. The problem is that it's a noisy room and the music quickly gets lost in the rafters, meaning that the din of conversation is the overriding sound while dining.

By now everyone's heard that Rappahannock has prosecco on tap ($8) and brought in a ringer to develop its beverage program. Katie Nelson, whose Spanish highball was featured recently in this section, was plucked from Washington's noted Columbia Room. Her deft touch with the cocktail menu is evident, although you'd think that also would mean a bar staff on point, and at least in three visits, that hasn't been the case. Granted, it's a large bar, but staff members seem oblivious to some diners for far too long. At a table during lunch, service is more attentive. The restaurant is on Open Table and reservations are a good idea.

For fans of Rappahannock River Oyster Co.'s Northern Neck tasting room, Merroir, be forewarned: The Border Springs lamb that's all over that menu is notably absent here. And expect some sticker shock. The same dozen oysters, whether Olde Salts, Witchducks, Stingrays, Yorks or buttery Rapphannocks, that ring up at $15 there are $24 here. While Rappahannock's corner location means two walls of windows to watch the colorful street theater of Grace Street, it pales in comparison to relaxed eating with a view of the river and marina.

But not everyone has the time or desire to drive an hour to eat at a rustic restaurant on the water. For them, there is Rapphannock, a place still getting its sea legs in terms of service and ambiance, but one with great promise for making Grace Street even more attractive as a dining destination. And isn't it about time? S