Food Review: Mostly Hits but a Few Misses at Hibachi Box in the Fan 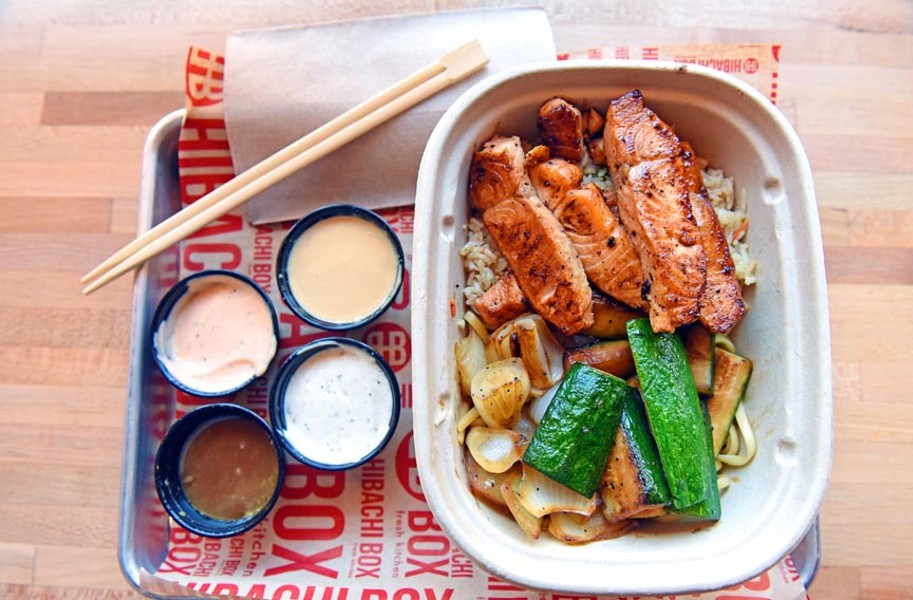 The success of a restaurant can be attributed to many things, but one thing arguably is a strong sense of identity. Sometimes it comes from a sleek concept or an excellent product. In many cases, it’s both.

Near Grace and Harrison streets beneath Edo’s Squid, there’s a storefront about the size of a Starbucks happily embracing the curse of Chipotle generation: the fast casual meal. Hibachi Box serves Japanese takeout, but effectively frames its restaurant as a destination in and of itself.

In the dining world, identity means knowing yourself and your customer. Hibachi Box has this locked down. Everything, including the preparation and the packaging, is done in a brand-specific way. The bold logo is plastered on everything. All entrees come in biodegradable, rectangular takeout boxes, about 4 inches deep, with bright and snappy labels. Most customers are students who take their food to-go, and I suspect this is why no matter what you choose, your order is ready in about seven minutes or less.

In many ways, Hibachi Box is Foo Dog’s scrappy little cousin. The concept is trendy, minimalist and colorful, perhaps in efforts to appeal to their cool neighbors from the Virginia Commonwealth University art school down the street. One wall is made of reclaimed cedar and displays various painted skateboards.

If you’re one of the few customers who cares to dine in, you might also notice how efficiently the small space is used. There’s seating for nearly 50 people at a combination of high tops with counters made of painted plywood, tables for two, some of them wobbly, and a bar in the window. Ikea-like shelving in primary colors is suspended from the ceiling — some shelves hold ingredients, others feature anime action figures.

The staff is on top of it. Every five to 10 minutes, a young man can be seen sanitizing tables. Diners order at a small register in the middle of the store from chipper, speedy cashiers. Even if there are only two other people in the place, between the pop music playing and the spatulas clacking on the griddle, it’s always loud, and it’s occasionally necessary to shout an order at the cashier to be heard. One alternative, if you’ve stopped by to grab-and-go, is to order ahead online.

I’m handed a small house salad with a ginger dressing in a plastic container that comes with every meal. Each box contains a bed of fried rice with your meat of choice resting on top on one side and a vegetable-topped pile of thick noodles next to it.

Start with the steak hibachi ($8.95), with a melon-ginger drink ($1.95) to complement the steaming hot food from the grill. The meat, though cut in tiny bites, is surprisingly tender and juicy, drenched in soy sauce. The rice is cooked well — not over-seasoned — and tastes even better when drizzled with Hibachi Box’s yum yum sauce. And the vegetables hit the spot — zucchini is cooked al dente, along with silky onions. The noodles, however, are unnecessary, and I wish they supplied more vegetables instead.

The yaki yaki noodles ($7.95) are abundant and heavy. The thick, twice-fried noodles are coated in a peanut ginger sauce, with a glazelike consistency reminiscent of lo mein. They’re tossed with carrots, mushrooms, chopped red pepper, snow peas and topped with slices of pickled Japanese namasu cucumbers and crunchy flakes. Be forewarned — the pungent smell of the cucumbers slightly detracts from the meal if you aren’t ready for it.

Goatocado, the health-conscious food truck and pop-up shop in Carytown Bicycle Co., also offers a quinoa bowl on the Hibachi Box menu ($7.95), but a lentil stir-fry with soy sauce is an odd pairing and doesn’t seem as fresh as Goatocado’s usual offerings. Skip it.

During a later visit, I wonder if the quality of the food measures up to the character of the place. Would I enjoy my food as much if it were in white Styrofoam? Fortunately, I’m proven wrong with the salmon hibachi ($10.95), the most thoughtfully prepared of the protein options. The box arrives as all others have and contains five pieces of salmon grilled in a light miso dressing. It’s tender and flavorful in its own right — not just as fast food.

If you happen to be in the VCU area and need a lightning-fast dinner fix, you’ve found the box to order. S