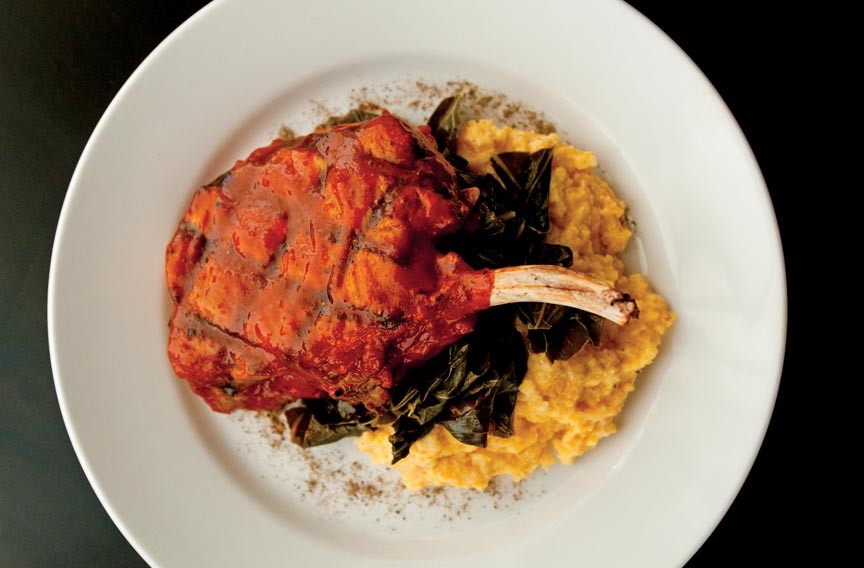 If you can judge a city's character through its dining scene, then Richmond clearly isn't abandoning its Southern identity, even while the business community tries to re-brand the area and its demographics continue to change.

You could eat for a week at only Southern restaurants, gorging yourself on mac and cheese at Mama J's, meatloaf at Comfort, fried lake trout at Croaker's Spot, or some fancier fare at Julep's or the Roosevelt. Capitalizing on this trend, several venerable Southern mainstays are giving birth to new ventures: Comfort's Jason Alley opened Pasture, serving Southern small plates, while the team behind Julep's opened Mint to serve new-casual cuisine.

Mint takes the location of the old Davis and Main in the Fan, replacing its more upscale interior with simpler, more stripped-down and casual décor. Televisions and a prominent bar set the mood, while the brightly colored walls, mirror over the bar, and large windows create a well-lighted space that invites lively and upbeat energy. Overall, it feels more welcoming to the Main Street bar crowd than the Julep's fine dining set.

The menu is designed to appeal to a diverse audience, however, with choices ranging from inexpensive snacks to pricier entrees. A commitment to local foods is proudly proclaimed through a list of farms that supply the restaurant, announcing a welcome marriage of local food culture with local food.

As you make your way through the menu, it becomes apparent how many items make repeat appearances. Byrd's Mill grits accompany three of seven entrees; tasso ham rémoulade makes several showings, as do pimento cheese and fried green tomatoes. These are perfectly fine elements to use, but the initial impression of a wide-ranging menu gives way to a feeling of repetitiveness. Customers should be sure to check for the specials; one of the best dishes I try is a chilled watermelon soup with mint and ginger that unfortunately isn't on the regular menu.

The snacks range from the expected — fries ($4) and deviled eggs ($5) — to more inventive offerings, such as grilled spring onions with pecan-romesco dip ($6). The root-beer-battered onion rings ($4) are a nice surprise, with airy batter that retains a faint flavor of root beer. Among the salads, the barbecue roasted beets and arugula salad ($8) are a standout, despite the sin of a Southern restaurant using barbecue to mean grilled.

Among the entrees, the grilled bone-in pork chop ($18) is the best I've had in recent memory, perfectly cooked to order — medium rare — and wonderfully moist and flavorful because of the brining in bourbon and sweet tea. But the accompanying cheesy grits are served cold, and the jalapeño-apple-molasses barbecue sauce is an off-putting Day-Glo orange with flavors that don't quite come together. By contrast, every element of the pan-roasted flounder ($17) is excellent, with seasoning permeating every bite of the fish. A piquant creole gravy adds welcome flavor to the fish and accompanying grits and collards.
The most unusual entree is pulled-pork pasta ($16): wide, flat noodles served with collards, sweet onions and tomatoes in a pot-liquor-cream sauce. The sauce adds depth of flavor and with its light touch of cream, manages to be comforting and hearty but not too heavy.

If you prefer fried foods lightly breaded, Mint isn't the best choice. Everything fried is hidden behind a heavy cloak of well-seasoned breading, which works better on some dishes than others. The fried chicken and waffles ($16) fare well, while the pickle chips and green tomatoes aren't substantial enough to withstand this treatment.

Desserts are standouts. One bite of the baked-to-order cookies ($6) induces a pleasant but overwhelming sugar rush. The beignet of the day ($6) is heavenly — blueberry on my visit — and the best I've had outside New Orleans.

Mint is a nice addition to the Main Street restaurant and bar scene, offering, as advertised, casual Southern cuisine served late into the evening. It doesn't, however, stand out among the many excellent Southern restaurants in Richmond. Tweaks to a few recipes and improved execution could elevate this from simply a Fan watering hole with decent food to a true dining destination. S