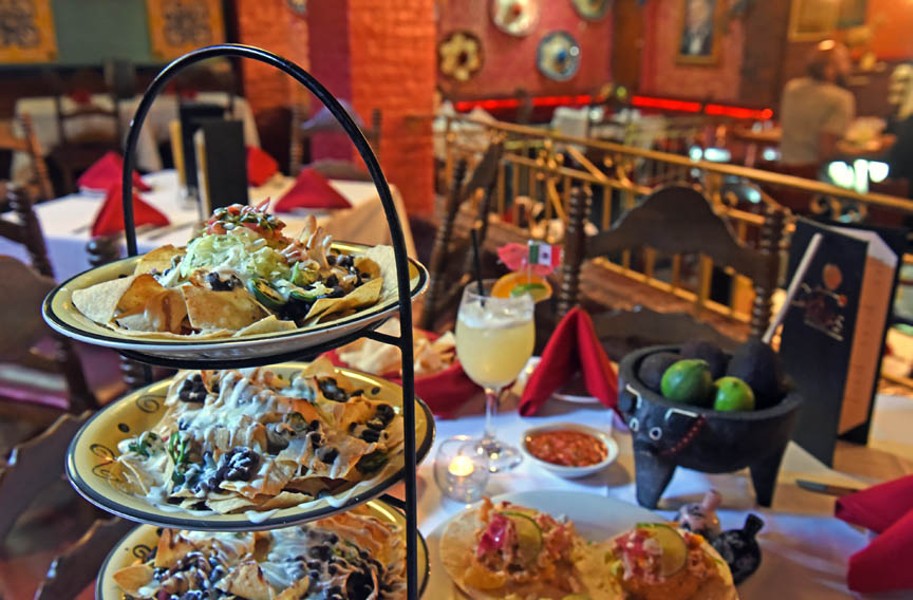 It’s not hard to make a grand entrance at Mijas Mexican Kitchen & Cantina. Walking through the front door of the former La Grotta space takes you immediately down a curving staircase and deposits you squarely in the dining room.

Where the subterranean space once oozed an old-school Italian vibe, it’s now taken on a different flavor with umber walls, colorful sombreros, banquettes with brick backs and bright flowered cushions and a back bar stocked with good tequila. Day of the Dead figurines adorn a shelf over what was once a pizza oven. The metal scrollwork that felt kitschy when it was La Grotta now just seems like a dated leftover.

Walk down a couple steps from your landing place and you’ll arrive at the long L-shaped bar where margaritas, cocktails, frozen drinks, and both nonalcoholic and regular sangrias — including a champagne version — await.

When not in search of enormous portions and leftovers, a satisfying meal can easily be made of starters. Red tortilla strips add a jolt of color to a winning chicken, rice and tortilla soup Mexicana ($7) that’s also a cup-size option at lunch. Redolent with the enticing smell of hot pastry, empanadas de pollo ($9) tend to be oversized, the better to accommodate a thick filling of savory pulled chicken and oozing Chihuahua cheese.

For sheer spectacle, it’s hard to beat the presentation of nachos altos ($13.95). The word “altos” translates as high and here three kinds of nachos — black bean and jalapeño, both pulled chicken and pulled pork, each topped with pico de gallo and crema — make their own grand entrance on a pie stand with three plates. Unlike a traditional platter of nachos where chips are stacked high so that some remain dry or without toppings, every chip here holds some treat. I’m not going to lie, it’s a nacho lovers wet dream.

Don’t count on a show when ordering tableside guacamole ($8), although we did, at least until I spot our server all the way across the restaurant from our table, diligently crushing the ingredients in a large-footed mortar with the face of a pig. The guacamole gets texture and sass from big chunks of red onion, enough cilantro to announce itself but not overwhelm, and it incorporates the same salsa that’s brought to the table on arrival. Despite no affection for guac, our server’s deft hand with salt is apparent — and appreciated.

Using Dos Equis beer in the batter, crispy fish tacos (lunch $9.95, dinner $14.95), are presented three to an order and arrive in hard corn tortilla shells rather than the menu’s promised flour tortillas, but the mango-lime slaw makes up for it with a disarming sweetness to counter the fish’s crunch. The same slaw shines on grilled shrimp tacos ($14.95), with three fat seasoned shrimp to a taco.

Note to first-timers: Skip lunch if you intend to have at the bistec de Palomilla ($15.95), a classic pan-fried sirloin steak smothered in sautéed onions that are worth eating on their own, cozying up to rice, black beans and irresistible fried sweet plantains.

Almost as hearty, the pork, slow-roasted in banana leaves, that’s known as pibil ($14.95) gets points for its marriage of sweetness and a decidedly earthy aroma. Much of that comes from the herbal notes of the banana leaves that protect the pork from the heat, but it’s also aided by hours of slow cooking in a smoky oven. It arrives on a king-sized bed of rice with a bowl of perfectly cooked black beans and plantains.

Don’t expect fine-dining service, despite Mijas’ white tablecloths and cloth napkins. The Cantina’s young staff still appears to be learning the hospitality ropes, although I encounter nothing but friendliness and good intentions on all three of my visits.

Told to save room for dessert, we gamely order chocolate pot de crème ($6) and are rewarded with a large ramekin less like the classic French dessert and more like an extravagant serving of dark chocolate pudding crowned with whipped cream and shortbread. Few chocolate desserts best me, but coming after nachos and pibil, this one does. For the money, it’s also a terrific dessert bargain.

Mijas Cantina ensures its patrons don’t leave hungry— rare are the diners who’ll mount that staircase half as quickly as they came down it. S