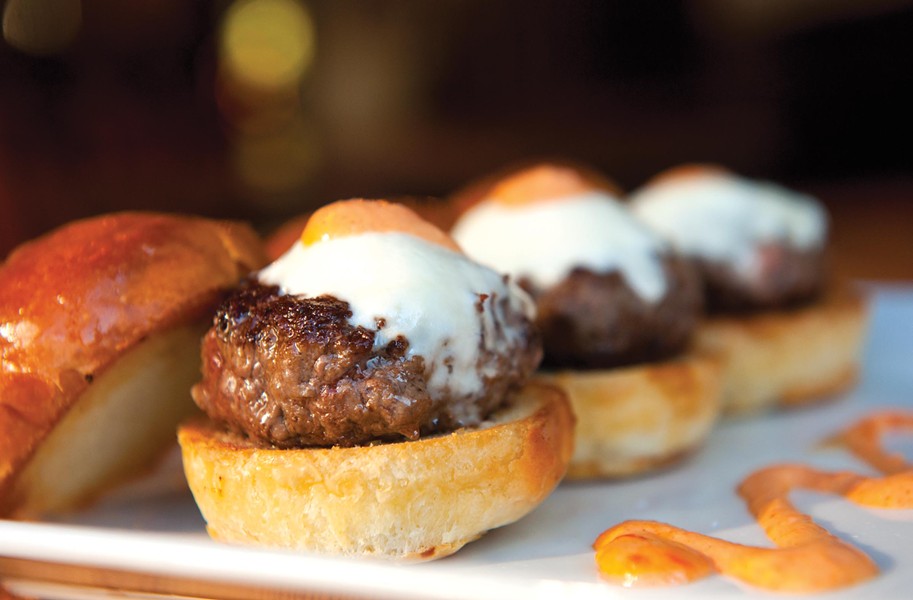 Remember Soble's at Robinson and Main streets, now Star-Lite, with its "Cheers" vibe? Maybe your preference was Fandango, now Racine, with its few beer taps, even less space and a couple of great bartenders? Or one-time last call spot Barracuda's, now home to Curbside Café? Now, think hard: What food did they serve? There's no need to besmirch a good bar's reputation, but let's call a bar a bar. No one is bemoaning the absence of any entree these places used to serve (except possibly the burger at Soble's). But the memories. …

Well, times in the Fan have changed. If you build it, liquor and location alone won't make them come. Those kids who hung out late are grown up and they want good food with their good times and good drinks.

At more than 10 years old, Metro Grill has been a mainstay on a street of many owner, menu and name changes. This year marks its turn for a facelift, but the bar still plays the old Robinson Street tune.

On a recent Sunday night, we're the only diners in the place. Given menus, we seem to be forgotten in our booth. Once remembered, drink orders are stilted and weird. Wine choices at an establishment that sells a $23 veal chop should, at the very least, be more than one of each. Confused, we choose white — a chardonnay, it turns out — and a draft while studying a menu that's creatively set up like Metro lines. Get it?

After a failed attempt to order the $8 fried chicken livers (the kitchen is out), we decide on fried oysters ($12) and Kobe beef sliders ($10) as appetizers. Both are satisfying bar food. Three sliders are cooked medium rare, though no one asked, with dollops of mozzarella and served with spicy aioli. Half of the well-toasted, thick bun provides a great vehicle. The oysters are a little watery but get a nice kick from the same sauce as the burger, dubbed here a Cajun rémoulade. Midbite, we learn there are appetizer specials.

Once entrees are ordered, service picks up when it changes to a different person. We're still uninformed of specials, but notice late the chalkboard write-ups on both sides of us (our mistake). The fried chicken dinner ($16) with Gloria's famous collards and truffle macaroni and cheese is a cacophony of flavors. The airline (wing joint attached) chicken breast is lightly breaded, salty and crispy. A dousing of rosemary honey butter seeps into the macaroni, coating everything on the plate with sugar. A vinegary bite from the collards would be excellent to cut the sweetness but never surfaces.

On another visit, the pork chop ($16)suffers from the same saccharine treatment. Mango chutney is packed Napoleon-style on a hefty but unseasoned chop. A few spears of asparagus and fries ($4) could be warmer.

Wandering eyes will stray toward the distracting kitchen opening. Boxes of cheap wine (most likely used for cooking) are stacked up front and center and kitchen staff is socializing. We're particularly grateful to the chef who passes around the veal chop for a smell test before deciding it's not viable to serve.

Brunch is big plates and big fun with little elevation in food choices. But just like bars past on Robinson Street, drinks and familiarity feel like home at Metro. On my visits, including two dinner hours and a brunch, the bar slowly peppers with regulars, calling to cooks and bartenders by name. No one appears to be ordering the food. S