A second location of the Richmond Cuban classic adds to Fan favorites in the West End. 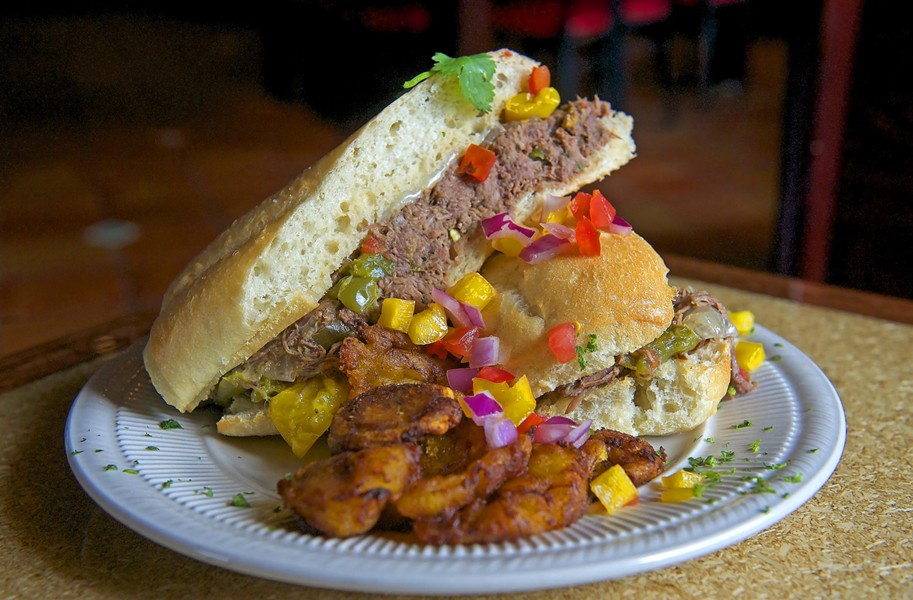 The newer spot is bigger and bolder, with an inescapable suburban feel perhaps better suited to its West End clientele. The interior sports wallpaper of green palm fronds near the extended bar, matched by green walls covered salon-style in paintings, photographs and prints, including one portraying co-owner Manny Mendez as a saint.

A small sign further clarifies ownership: “Welcome to Kuba Kuba Dos! Manny, Johnny and Hugo.” Johnny is ubiquitous restaurateur Johnny Giavos and Hugo is Hugo Jordan, the easygoing, hardworking and longtime talent in the Fan kitchen. If ever anyone deserved co-ownership of a restaurant, it’s Jordan.

Bad news first: If you’re judging this staff against the crack team at the original location, you’ll be sorely disappointed. The most consistent thing about Dos appears to be its uneven staff training, front- and back-of-the-house.

How else to explain a 10-minute wait between being seated and a server showing up at our table — with no apology? Or when a server drops off an appetizer plate and we tell her it’s supposed to include tasso ham. “Is it?” she wonders. “I’ll ask the kitchen.” By the time she returns with a ramekin of ham, we realize it’s also absent the promised corn bread. On another visit, the corn bread that’s supposed to accompany another dish again is missing. An entrée arrives without the billed plantains. During a brunch visit, I overhear two different tables inquire about a dessert special. Both times, the servers meticulously explain the dessert, raving about its flavors, but it’s not until the customers try to order it that they’re told that the kitchen is sold out. During the course of three visits, I’m sensing a pattern.

It’s a shame because this is a place that knows how to do food well. Multiple national media “best of” lists have included the original Kuba Kuba with good reason, and at Dos, an extended menu tempts with even more Latin-influenced options for sipping and supping.

Be forewarned: Ordering the camarones y mejillones ($10.95) means eating more bread than any one person needs at a meal, but it would be criminal to leave any of the savory tasso ham-flavored broth in the bowl after polishing off the shrimp and mussels. Lime sour cream elevates picadillo empanadillas ($4.95), traditional pastries stuffed with Cuban beef hash.

If you’re in sandwich mode, go directly to the sloppy José ($7.95), do not pass go, do not collect $200. The brothy shredded beef flank is so flavorful, so juicy, that its blanket of melted swiss seems superfluous. Lighter appetites gravitate to the Elena Ruíz ($7.95), a piquant, pressed sandwich of turkey, cream cheese and strawberry preserves.

It’s breakfast all day with an extensive huevos menu, including over-easy eggs and tortillas — Spanish-style frittatas — and omelets. You’d be wise to arrive as hungry as a bear for the massive smoked salmon and spinach tortilla ($9.50), boasting more salmon, potatoes and green peppers than egg. Slow-roasted, mojo-marinated pork ($14.95) ably demonstrates the kitchen’s flair with the pig. Juicy, succulent and plentiful, it’s classic Cuban fare with black beans, rice and fried plantains on the side.

Any dessert lover who’s been to Kuba Kuba can attest to Mendez’s mother’s tres leches cake ($5.95) as best in show, but a richer ending is chocolate espresso mousse ($5.95), so dark that it benefits from a swipe of whipped cream to sweeten each bite.

Bustling on all my visits except Saturday brunch, Dos isn’t a place to linger. Tables can be so close you’ll hear about somebody’s bursitis, whether you want to or not. Tile floors and families with young children tend to make it clamorous, even with Latin rhythms playing.

But the draws outnumber the dross at the new place. As long as you have a spirited rum cocktail from the extensive bar menu or a plate of colorful food in front of you, chances are that you’ll happily deal with the rest. S