Food Review: Kreggers Tap and Table Makes Itself at Home in Ashland 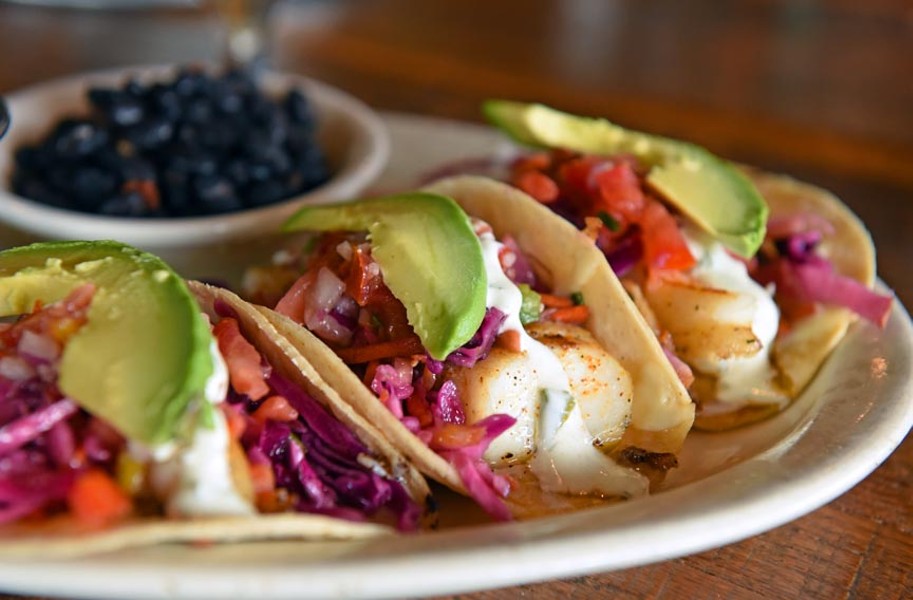 City dwellers aren’t the only people who deserve neighborhood restaurants.

As if it isn’t enough that suburbanites generally must drive to the closest watering hole, oftentimes they also must settle for a chain restaurant. With the opening of Kreggers Tap and Table, that’s no longer the case for residents of the Atlee Station area — or anyone within a skillet’s toss of Interstate 95.

Kreggers establishes itself as neighborhood-casual with hostesses and servers in shorts, and rolled-up garage doors opening onto a cooled patio. Alas, the informality extends to service which, despite a large staff, tends to be absent-minded. Sometimes it’s a 15-minute wait to get our check, another time we sit forgotten until I flag someone down, and on the third visit, every table seated after us is eating before we’re served.

But smiles are the norm and their philosophy is spot-on, with a saying, “Every day’s a holiday, every night’s a honeymoon,” plastered on the wall and menu. Families tend to gravitate to one side where parents socialize next to children staring into the blue lights of their individual screens, while singles, couples and post-game team members tend to congregate on the colorful bar side.

The tap portion of Kreggers’ name is underscored by two dozen beers ($3.50-$8) that represent local and national, plus eight wines on tap ($6-$7). In addition, its list of 18 specialty cocktails ($6.50-$10) includes a Virginia Bloody Mary made with Belle Isle Honey Habanero Moonshine.

The menu naturally needs to cover a lot of bases to have the broadest possible appeal, and that’s evident in the nine sauce options for smoked chicken wings ($10) — although the root-beer glaze we choose is so innocuous as to be almost mute. With shrimp kisses ($11), it’s the kick of pepper Jack cheese that goes missing, leaving only the peppered bacon wrapped around the shrimp to deliver any discernible flavor.

A heaping serving of fried Brussels sprouts ($7), on the other hand, is distinguished by Kreggers’ “jack’d up” bacon jam, a sweet complement to the crispy, earthy sprouts.

Summer’s arrival elevates salads to the forefront, and I’d be the first to emphasize how noticeably fresh all the mixed greens underpinning Kreggers’ offerings are. Southwest chicken salads ($12) are as commonplace as bucket drummers outside the National, but it’s become a restaurant staple because the ingredients — avocado, red onion, black olives, tomatoes, pepitas, jalapeños, pepper Jack and Colby cheeses — marry splendidly and never more so than here with Kreggers’ mango pico de gallo.

Tender and versatile flatiron steak crops up all over the menu as a grilled entree ($18), a sandwich ($12) and as the meaty star of a steakhouse salad ($14), agreeably available in pink or not pink and sparked with house-made onion straws, blue cheese crumbles, tomatoes and red onion.

Riding a popular wave of the moment, street tacos are available Baja-style or Texas-style with your choice of brisket, chicken, shrimp or fish. Opting for Baja fish tacos ($11) means Monterey Jack melted into a tortilla, topped with broiled tilapia and cilantro-lime cream sauce under a mountain of jicama slaw and mango pico de gallo that almost obliterates any taste of the fish. On its own, the fish tastes fresh, cooked to perfection and nicely seasoned with a pepper and garlic spice blend.

Distancing its po’ boy from the masses, Kreggers gets raves with a fried crawfish version ($14), fetchingly sloppy with chowchow mayonnaise, provolone cheese, house-made pickles, lettuce and tomato — a filling beast of a sandwich. A classic cheeseburger ($9) is just that, and the accompanying fried corn turns out to be half an ear after a brief dip in the fryer. Interesting, but cool to the touch.

Temperature issues also affect the rice underneath jerk’n chicken ($13), and while we let that slide because our tongues are electrified with the heat of the jerk spices, most people will insist on rice being at least warm.

I won’t tell you I was dazzled by my meals in Hanover County, but I also don’t live in the neighborhood. I am here to express how satisfying it is knowing that it’s Kreggers, and not Applebee’s or Chili’s, that’s set up shop so that convivial locals have a place to call their own. S