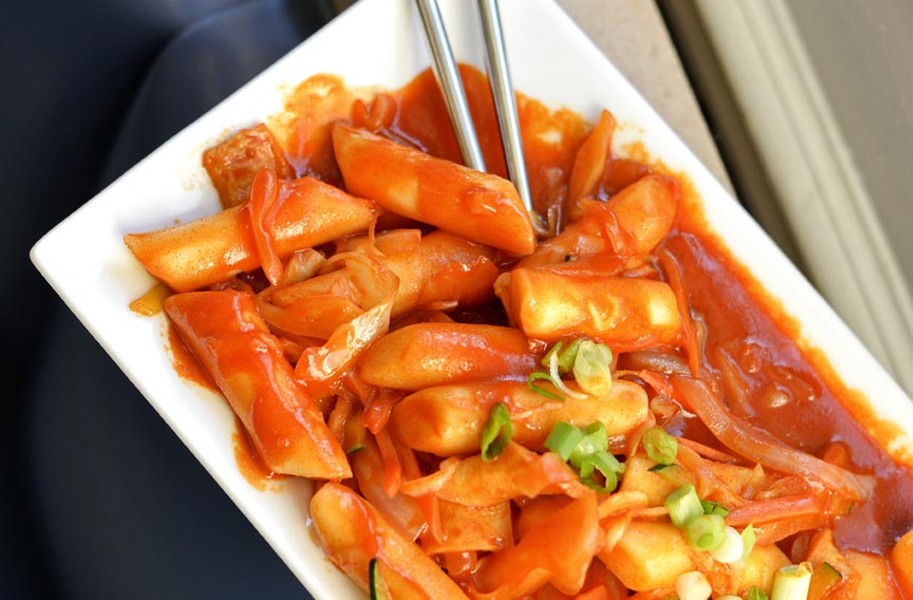 Ash Daniel Appetizers such as K-Town’s spicy dukbokki give diners a glimpse of good things to come.

There’s another reason to check out an ever-expanding dining scene in Monroe Ward: A meal at a newer Korean restaurant may give longtime Grace Street chowhounds a bit of déjà vu.

In many ways, K-Town Kitchen & Bar is a reincarnation of the former Mama’s Kitchen that was near Grace and Harrison streets in the heart of Virginia Commonwealth University’s campus. Its move and change of name represent an upgrade in the restaurant’s décor and vibe. It’s decidedly hipper, albeit lacking the unparalleled street theater of the school’s main drag.

Looking around the space on his first visit, a friend flashes back to late nights here, when it was 4th Street Cafe, eating greasy food to soak up alcohol in the wee small hours, back when it was considered preferable to the diner a block away.

With no such memories, I see only the present — blue banquettes, dark brown tables and walls adorned by calligraphy and traditional images of flowering branches, which are complemented by white pendant lamps overhead, including a large, globelike one over the bar.

Musically schizophrenic during the course of three visits — I hear vintage soul, classic rock and modern country — our server assures us that, yes, some nights are designated for K-pop, South Korea’s contribution to the contemporary musical canon.

Taking the bar part of its name to heart, happy hour extends from 3 to 7 p.m., with a cocktail list of creatively executed gems such as the whiskey-based King Jong Ooh ($8) or bloody Kimmys made with house kimchee guaranteed to prick the tongue. On Wednesday nights, bottles of wine are half-off.

Evening drinkers fare better on weekends with a menu that runs from 9 p.m. to midnight, offering what our server terms drinking food, including sweet and spicy Korean wings ($7), Korean tots ($5), ramen, bulgogi and a handful of other absorbent dishes for late-night revelers.

Starters play the role of a movie trailer, giving eaters a glimpse of good things to come, from the freshest of flavors in shrimp spring rolls ($4) with chunks of shrimp unexpectedly large, to the heat of dukbokki ($7), tubular rice cakes with vegetables in a spicy sauce you won’t soon forget.

A lunch specials menu even a poor artist could afford has helped establish K-Town as a popular midday destination for downtowners. You can’t go wrong at lunch with donkatsu ($7.50), unless a panko-crusted fried pork cutlet under brown sauce with rice and house-made kimchi isn’t your thing. Ditto for ramen ($7/$8.50 with chicken), which provides a lot of slurping satisfaction for the money, along with its one lunch add-on — such options as kimbap rolls or mandoo dumplings.

Vegetarians will feel at home given that tofu and vegetables get a lot of play on the menu. Try tofu jahpchae ($7/$9.50) to be dazzled by the understated combination of sweet potato noodles stir fried with tofu and mixed vegetables in a light, sweet brown sauce.

Heat seekers need look no further than sweet and spicy shrimp ($11), which manages to be peppery, pungent, slightly sweet and wildly spicy simultaneously — but also requires a major tolerance for spiciness. We decide there’s no shame in putting down our chopsticks after a few bites to tamp down the fire on our tongues with Korean pancakes ($6) — essentially, vegetables coated in flour and eggs, and lightly griddled in oil. The aroma alone seduces.

When winter weather calls for hearty eating, hot-pot bibimbap ($12.50) is a satisfying default, the stone vessel containing rice, vegetables and chicken made irresistible with a large fried egg on top. Handing me a long-handled spoon, our server instructs me to stir it up completely so that I’ll have every element in each bite.

And that’s another part of K-Town’s appeal: smiling service that equals the kitchen’s output. Diners are automatically given roll-ups of a fork and metal chopsticks, but no one gives me the stink eye when I request wooden ones instead. When we inquire about the tantalizing sauce we’re eating, our server grins and explains that the authentic Korean recipes were passed down from the owner’s mama, and like most, she isn’t divulging any secrets.

I will: K-Town is another jewel in Monroe Ward’s crown. S