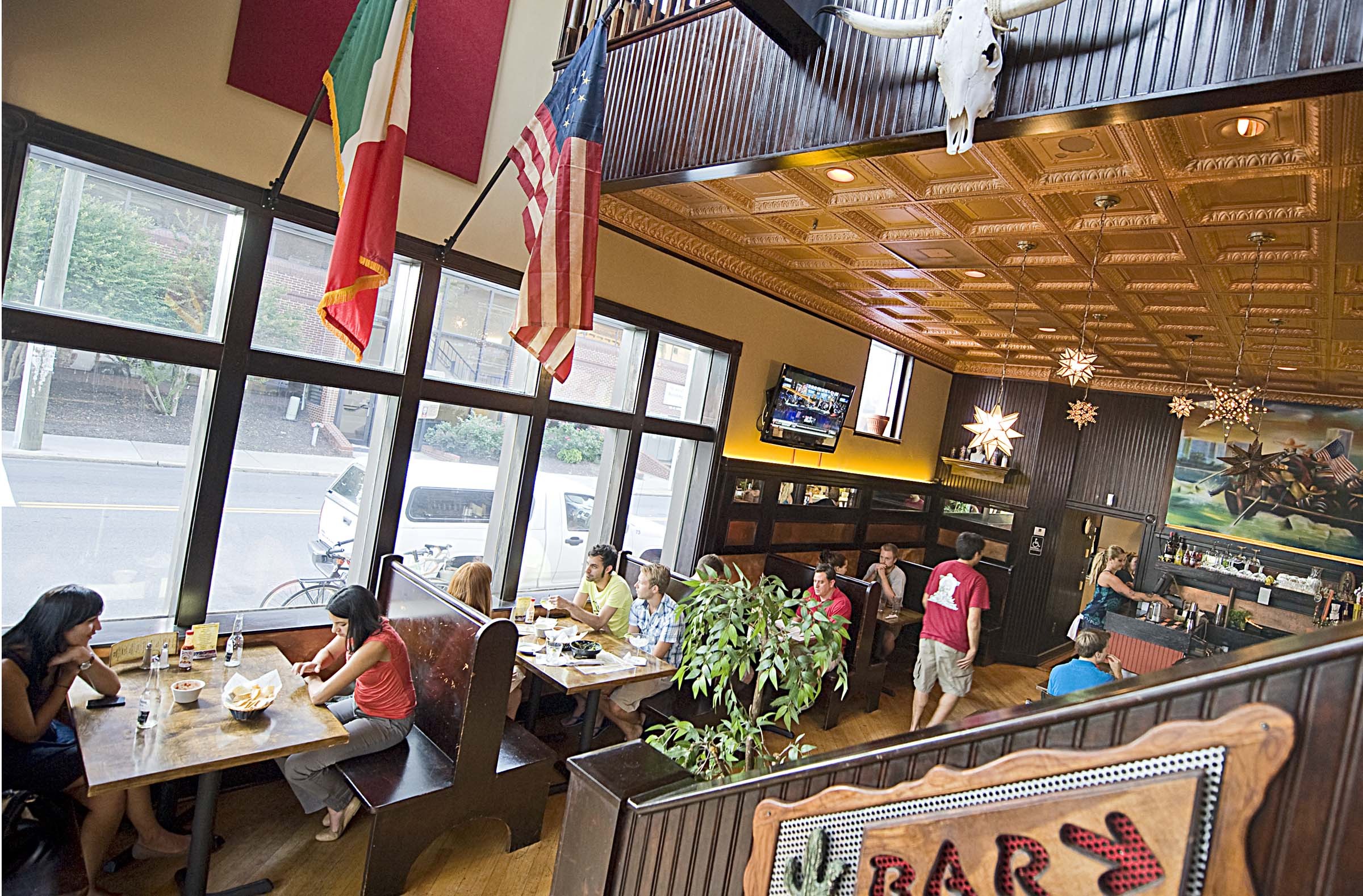 One of the most exhilarating benefits of Richmond's ever-expanding food scene is the addition of more authentic ethnic restaurants. In the past few years, we've been fortunate to get upgrades in Chinese, Indian and even Tex-Mex options. So it's difficult to fathom why any restaurateur with a proven track record would think Richmond needs more Americanized Mexican food. But with a logo that features a mustachioed George Washington in a sombrero, that's the clear intent.

Jorge's Cantina, by the fine folks behind the crowd-pleasing Lady N'awlins Cajun Café and F.W. Sullivan's Fan Bar & Grille, offers all the TV screens and bar scene of those two, but without doing anything that isn't already being done much better elsewhere on the food side. The two floors of the former Fanhouse feel little changed except for the addition of some Mexican-themed movie posters and south-of-the-border looking pottery. But it's a unique space and affords the choice of a lively bar vibe upstairs and a more sedate dining room down. Although with half a dozen screens, you can count on seeing sports no matter where you are. Still, a restaurant isn't about décor, it's about food and service, and this is where things get uneven.

The menu is huge, including appetizers, ensaladas, tortas, burrito wraps and bowls, fajitas, quesadillas, plates especiales and tacos. With certain items marked on the menu as Jorge's favorites, it only makes sense to see if Jorge knows what he's talking about. Papas Laredos ($7), crunchy, spiced tater tots, have nothing on the regular versions. Torta qahogada ($9), a sandwich of roasted pork in a medium spicy chile-arbol sauce with onions, queso fresco and crema fresco, is filling but nondescript. Burrito tapatios ($7), a fat wrap of pork carnitas, black beans, pico de gallo and queso blanco, is the best of the bunch for the pleasing combo of long-cooked pork and cheese. Carne asada tacos ($9) of grilled sirloin with queso fresco and crema fresco are downright bland. And these are Jorge's favorites.

Realizing that perhaps Jorge's taste isn't necessarily the best guide, we try tinga Mexicana ($7), tostadas topped with chicken and onions simmered in a smoky chipotle sauce and sprinkled with crema, lettuce and tomato. The smoky chipotle sauce is the star here, adding in some serious heat and flavor. Avocado fries ($7), which our server says are very popular, are billed as coated in a medium spicy breading. But any spice is missing, making them seem like a waste of a perfectly good avocado. Perhaps because of Jorge's American roots, that bar staple, a plate of nachos grandes ($8), is well enough executed with black beans, lettuce, cheese, tomatoes, jalapeños and crema fresco to qualify as a satisfying lunch or an excellent way to sop up late-night drinking. The overabundance of crema fresco, however, makes for unappealingly soggy chips toward the middle of the plate. The unlikely sounding spicy peach carnitas burrito ($7), touted by our server as her absolute menu favorite, balances the salty meat with sweet peach-chipotle salsa. It isn't a flavor combination for everyone, but it works for those who crave that contrast.

On the weekends, Jorge's does brunch both days, a boon in a town where Saturday brunch still can be elusive. Brunch options closely resemble the regular menu, with the addition of scrambled eggs in the quesadillas, tortas, nachos and burritos. Although the restaurant's Facebook page cites the menu's price range as $0-$10, it goes as high as $13 and tacos aren't available individually; instead they come only in pairs with a side and range from $6-$12. That said, it offer two tacos for $3 on weekdays from 4-7 p.m. and kids eat free on Mondays.

Of note is that during the course of three visits, I've been nothing but impressed with both the friendliness and attentiveness of the servers, upstairs and downstairs. I just wish the food was as interesting and enjoyable as the people who bring it to me. S