This West Broad gem takes meat, smoke and heat to the extreme. 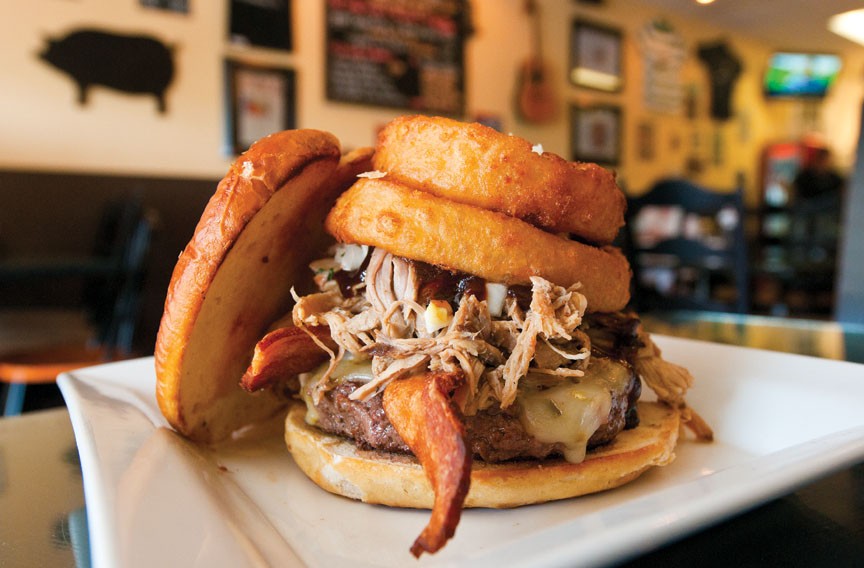 Barbecue joints often are one-dimensional, showing off their prowess with striated meat on buns with predictable sides such as baked beans and macaroni and cheese. This isn't a complaint. Hogshead Cafe, in a strip mall on West Broad Street, would be exceptional for its barbecue alone. But don't go just for that.

Go for the pork wings ($9.99), six small pieces of pork shank braised and fried till the edges are slightly crispy. These leglets are an anomaly, one bite tender and the next bite chewy. Heavily doused in tangy Hogshead sauce, these little pieces of pig are the right combination of comfort and chic.

Spend time with the fiery hot hog wings ($17.99 a dozen). Burn-your-face-off-hot barbecue on tender chicken wings is unexpected and welcome in a sweaty, awesome way. Or go half and half with the tangy barbecue wings, and get a respite of vinegar and sweet. Inexpensive pitchers of beer from four taps make this a worthy new destination for wing night.

Stop by for the hog dog ($8.99), a feat of meat, on meat. on meat — essentially voluntary cardiac arrest on a submarine roll. This all-beef dog, wrapped in bacon, smothered in pulled pork and topped with chopped slaw is no joke. Altogether, the two mealer is one of the best sandwiches, pound for pound (including the ones to your waistline) that I've had in recent memory. Thinly sliced bacon adds the right amount of salt without overpowering, while the zesty pork and acidic slaw add necessary balance.

If hot dogs aren't your thing, take some time with the hog burger ($11.99), another meat-to-the-third-degree dish. Cooked to order, this pile of Angus beef is topped with pepper jack cheese, pulled pork, bacon and barbecue sauce. Within its wheelhouse of pulled pork and chicken, Hogshead nails it. Tender pork arrives naked, allowing for the sauce of your choice: a sweet and tacky deep maroon hog sauce or a more translucent and tangy Carolina option.

Specials change all the time, and could be an appetizer of spicy tacos with shrimp or oysters ($10.99), or a surf and turf entree with plump fried oysters and a half rack of dry-rub ribs ($22.99). Beef brisket ($15.99), another special, is fork-tender with those crisp, guilt-inducing edges of char and intense flavor.

Sides are equally well done. The beer-battered onion rings are light and airy. Baked macaroni and cheese is thick, greasy and properly bad for you. Hush puppies are dense with corn meal. A cheesy broccoli bake is a lovely combination of healthy and hearty. House-made limeades and lemonades are lip-puckering and served in Mason jars. Desserts include locally baked pies and cakes of all kinds, for a sweet fix after a savory smoked entree.

Service is friendly and laid-back, and blends seamlessly with the cafe's small size and homespun décor. A full lunch and dinner crowd ratchets up the volume just slightly. To-go orders are managed quickly, and packaged with extra barbecue sauce (both kinds) for dipping lightly fried, sour and salty kosher dills ($5.99) or pouring over a hand-shredded Cuban sandwich ($9.49).

Hogshead has managed to carve a niche with great variety, using its flagship ingredient as a highlight and as a mainstay. One visit will show how evident this is no ordinary pig. S