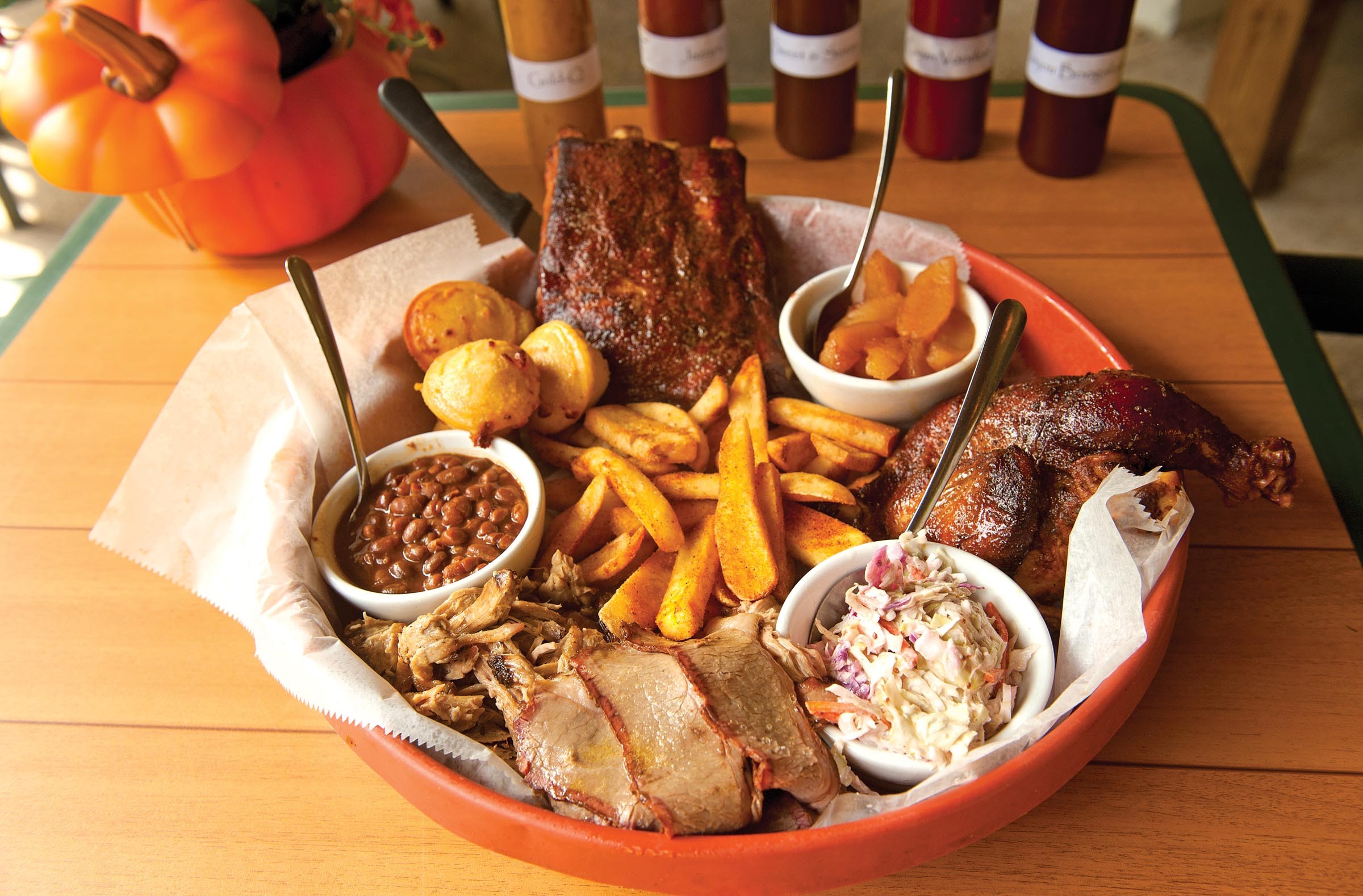 One of the delights of autumn is taking a weekend day trip. If you're headed toward Williamsburg via Route 60 and you're hungry, the Hog Wild Smokehouse is the place to pig out.

For 30 bucks, two or three diners can share a Hog Wild platter — a pound of ribs, half a chicken and a choice of beef brisket, pulled pork or smoked sausage. Plus a mound of fries, barbecued beans, warm apple slices, a cup of slaw and tiny cornbread cakes. A sandwich menu deconstructs all this into more manageable portions.

The extensive menu reflects the Louisiana roots of chefs and owner BillLee Watkins and his wife, Blanche, who runs the dining room. For some reason, BillLee got three L's in his name after his family moved to Baton Rouge, La., from Petersburg when he was 4 years old. At 7 he was fishing for crawfish and shucking oysters. He and Blanche met in the French Quarter — no, her maiden name wasn't DuBois — while he was in college.

Seven years ago they bought a World War II-era cabin that was the Oak Grove Tea Room. Since then, they've done up Hog Wild's décor in tacky New Orleans style, with strings of beads and Christmas ornaments on the walls, oilcloth and fake flowers on the tables, and 600-some pig figurines given to the owners to display in every cranny.

The meat is the draw. Watkins smokes the goods over a hickory fire; pork and brisket for 12 or more hours, ribs and chicken for four. He gets the wood from local workers for $50 or in exchange for food.

The meat is dry-rubbed with a secret family recipe that includes brown sugar and cayenne, and is served with five made-from-scratch sauces, each evoking barbecue havens North and South Carolina, Missouri and Louisiana. My favorite, Cajun voodoo, is laced with Tabasco and peppers. Others employ vinegar and sweet mustard.

Our friends proclaim the beef brisket "drool-inducing, the best we've had outside Texas." My experience with a brisket sandwich ($7.75) is less ethereal, primarily because half of it is fat. Likewise, much of the weight of the ribs ($16) comes from bone, producing only four ribs, though they are lip-smacking, arm-wiping good. So is the pork and chicken. The sausage ($12), however, looks and tastes store-bought.

A pork taco with grilled onion and aioli showcases the kitchen's lighter touch. Black-eyed peas in a tomato sauce and crispy onion rings are first-rate, but the fries are awkwardly large and bland (all sides $1.75). Noncarnivorous diners can choose from po'-boys of flounder, oysters, shrimp or catfish ($8).

Champagne is available, but real men and women will start and end with a house-recipe hurricane, ($7.50) the rum and passion fruit cocktail that trashes hordes of French Quarter tourists. Less heroic drinkers can opt for a mimosa of pomegranate juice and brut rosé ($5) or a bloody mary with a Cajun-pickled shrimp ($5.50).

All of the desserts (about $5) are homemade, including a mouthwatering vanilla bundt cake with lemon sorbet and bread pudding with a bananas Foster topping. BillLee's contribution is a pineapple upside-down cake with homemade butter pecan ice cream.

Hog Wild is a comfortable place where it's OK to keep your cap on and drink beer from the bottle, and where families are welcome. Kids eat free on Mondays, and during the week there are all-you-can-eat specials — ribs Tuesday, peel-and-eat shrimp Wednesday and catfish Thursday. No matter when, a stop there is an experience that sticks with you. S