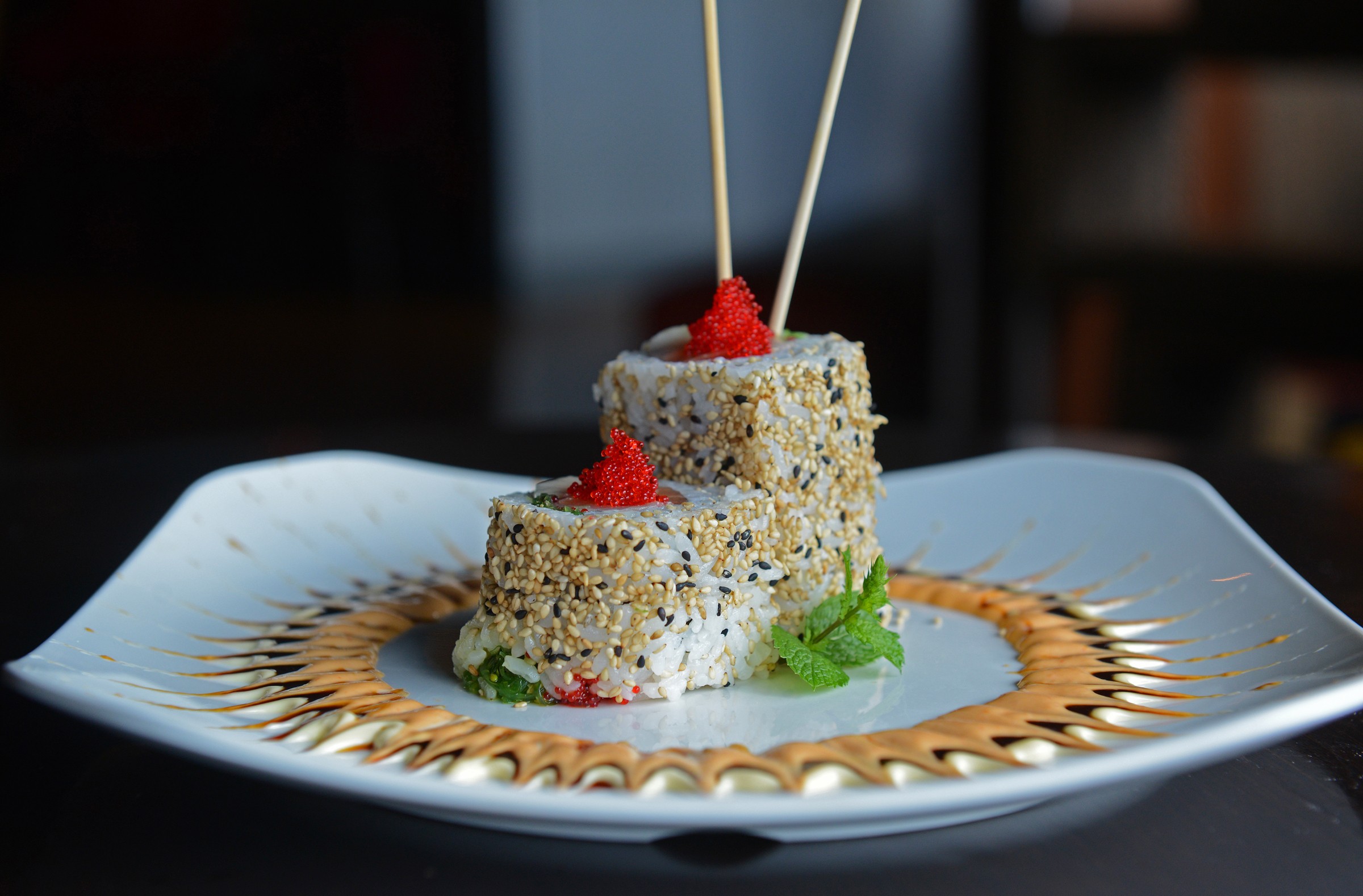 The lengthier a restaurant’s menu, the more I tend to wonder where the kitchen’s specialty lies. Understandably, a pan-Asian restaurant must cover a lot of bases — Japanese, Chinese, Vietnamese, Thai — which can make it difficult for the diner to discern what’s worth trying. Add in some standard entrees and it’s anyone’s guess which dishes are the kitchen’s strengths and which ones are best ignored.

Haiku Sushi and Lounge in the former Sensi space has been re-imagined in a far more sleek and modern style. The mesh curtain that once cut the room in half when business was slow now curves along the bar to separate it from the dining area. The sushi bar stretches along the back wall, a prime location to watch pros at work. Colored lights shine on textured white walls and generous booths and curving red banquettes invite lingering. At night the music has a lounge vibe, even moving toward dancey when we stick around till almost closing time on a Saturday night. At lunch, it’s upbeat Motown, no doubt to keep the worker bees alert enough to return to their cubicles.

Haiku Sushi is the brainchild of Hai Truong, the former chef and co-owner of Osaka. His business partner is Michael Hinerman, Osaka’s former general manager, playing the same role here. Like Osaka, there’s as much emphasis on drinking as eating, including a cocktail list ($9-$10) that numbers eight. A creative wine list of 19 whites offers most by the glass ($8-$12); of 16 reds, 11 are available as glasses. That’s a treat for wine drinkers. The beer list of 22 choices includes five Japanese and three locals. The sake menu ($6-$38) assists the uninitiated with concise descriptions and a glossary of terms. We try the sho chiku bai premium ginjo ($12 for 300 milliliters), labeled as “delicate, dry, silky and fruity” and served chilled in a small carafe, finding it to be everything promised.

And then there’s that enormous menu. Steamed, spicy pork dumplings in a spicy garlic sauce ($4.95) surprise us with 10 fat, little dumplings that are positively addicting in their heat. Steamed shrimp dumplings ($4.95), on the other hand, have an unpleasant, processed aftertaste. Pho spring roll ($4.95) is too Americanized for my taste, with braised pho beef, cream cheese, basil and mozzarella, but it may appeal to some.

An entire section of the menu is devoted to seviche, the fresh raw fish or meat marinated in citrus and herbs. Beef tataki ($11.95) is a standout with seared beef tenderloin, red onion, cucumber, scallion and spicy ponzu sauce. Haiku seviche ($11.95) is a huge serving of tuna, salmon, yellowtail, tilapia and albacore tuna, each cooked to perfection in the acidic citrus juices.

Haiku kicks up pho a notch with a filet mignon version ($13.95) and an accompanying tray of basil, lime, scallion and red onion. The dish is surprisingly full of pieces of perfectly medium-rare filet among the abundance of rice noodles.

Four teriyaki choices come with miso soup, ginger salad and rice. The chicken teriyaki ($15.95) is the main disappointment of all three of my visits. Arriving steaming and sizzling, a pounded chicken breast doused in sticky teriyaki sauce manages to taste bone dry. The broccoli and carrot slices on each end of the platter are steamed to toothsome perfection but lack any integration with the teriyaki flavors.

For the even less adventurous, the menu has an entire entree section ($15.95-$24.95) with offerings such as rib-eye steak, grilled lamb rack and pan-seared ahi tuna. But with a sushi bar in the back, it makes sense to go for something prepared right before your eyes. A separate menu lists out Haiku’s top 30 rock ’n’ rolls, with such nods to Richmond as the University of Richmond roll ($15) and the Lucky Strike roll ($14). The Batman roll ($13) is a simple table-pleaser with spicy tuna, avocado and tempura crunch topped with tempura kani, all the ingredients tasting incredibly fresh. The Forest City roll ($12) is more decadent with tempura lobster, smoked salmon and spicy lump crab topped with red caviar.

At midday, I try a lunch box of Thai basil shrimp ($10.95). After a bowl of flavorful miso soup and a ginger salad, my bento box arrives arranged like an edible gift. Six large stir-fried shrimp come in a spicy Thai sauce with red pepper, basil and onion. Fried rice with spinach and egg is anything but average, making me realize there’s a reason a whole section of the menu is devoted to it (including filet mignon and veggie fried rice). The accompanying California roll is large while the selection of tempura — shrimp, sweet potato, onion and zucchini — is crispy and worth eating even once I’m full. A sectioned orange cup sits in one compartment for dessert, ridiculously sweet considering that it’s nowhere near citrus season.

Service on all three visits is stellar, attentive but not overly friendly, and knowledgeable without being condescending. Parking is a snap because guests can park free in the well-lighted River Lofts parking lot directly across the street. No, not everything on the menu will rock your world, but plenty of it, including the beverage program, elevates a night out for Asian food to something the corner dive can’t provide.