This conscious cuisine makes a case for clean, meat-free dining. 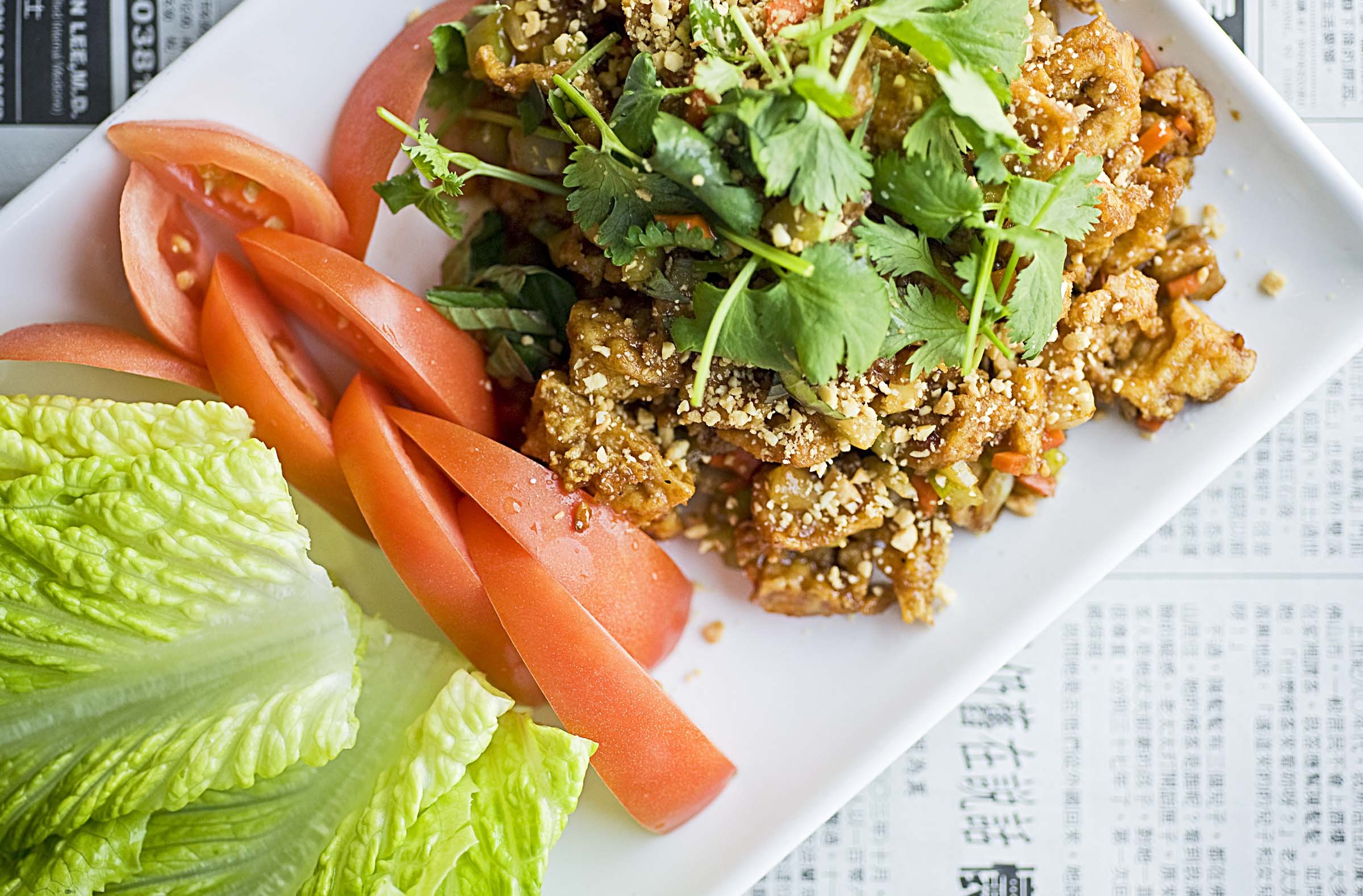 A carnivore might not understand the distinction, but a vegetarian or a vegan does.

"I try to eat where I know who's cooking my food," a chef explained to me once about how careful she is about avoiding meat. "I'm extra vegan so I want a place where they use a different spoon for the vegetables than the marinara."

Anyone with similar concerns and looking for healthy, alternative options has a new go-to in Green Leaf Vegetarian restaurant, recently opened in the West End.

Green Leaf's dining room isn't going to rock anyone's world. It's simple and serviceable, with pale green walls and a few nice touches such as black shades with slender, floral, silk panels and large-format black and white photographs of cityscapes on the wall.

But the menu is extensive, offering scores of choices for eating meatless. House-made pot stickers ($4.50) of dried tofu, vegan ham, nappa cabbage, shiitake mushrooms and carrots taste light and fresh because of the delicate dough, which has been rolled out thinly before being steamed or fried. Lettuce wraps ($7.50) are a party of flavors with sautéed tofu, carrots and onions, but it's the water chestnuts and crushed peanuts that add texture while the mint and cilantro linger on the finish.

For those just dipping their toes in the vegetarian pool, salt and pepper deep-fried king mushrooms ($7), cooked in cholesterol-free and trans-fat-free vegetable oil, will satisfy on a traditional level. Hot and sour soup with enoki mushrooms and tofu ($2) isn't as hot as expected, while the old standard, wonton soup ($2), has such flavorful broth that none of us can believe it doesn't contain chicken stock.

But of course it doesn't, because this is a place where the owners promise that nothing that walked, grazed or swam has been anywhere near the kitchen. From the noodle soups portion of the menu, I choose round noodle so-called crab soup ($7.50), a good-sized bowl of rice noodles, fried tofu, ocean nuggets and vegan ham with a topping of cilantro and green onions. It's so addictive that multiple spoons hit each other when we all dig in repeatedly. A vermicelli noodle bowl with crispy spring rolls and shredded tofu ($7.50) over chopped lettuce, basil, bean sprouts, matchstick cucumbers and a slightly sweet sauce is a light and refreshing summer meal. Curry fried rice ($8) with vegan ham, onions, butternut squash, chickpeas and bell peppers straddles the fine line between too delicate a curry flavor and a curry monster.

"Beef" with broccoli ($10) looks like the real thing with chunks of soy protein nuggets. But the brown sauce works far better with the crisp-tender, bright green broccoli than with the nuggets, which seem overly sweet. General Tso's golden nuggets ($11) also contain soy protein nuggets, which fare better with the traditional sweet and spicy garlic sauce, but this time the broccoli is army green and way past crisp. A dish called taste of compassion ($8) makes a meal of greens — kale, broccoli, bok choy, Chinese kale, snow peas — and with its light ginger sauce imbuing every bite, is even better the next day.

If there's one thing Asian restaurants aren't known for, it's an array of dessert choices. And many dessert lovers probably would be planning to walk across the shopping center to Gelati Celesti afterward. Not necessary. Green Leaf has taken on WPA Bakery in Church Hill as its dessert supplier, meaning you can order vegan berry pies ($4) as well as coconut cream, Key lime and mocha cheesecake pie, and cakes ($5) such as chocolate with coconut icing and hummingbird.

In a city known for its growing and vocal vegetarian population, Green Leaf is bound to lure city types out to the county. And after three visits, I must admit that even a devoted meat eater can come away stuffed, marveling at the complexity of flavors and how the healthy and mindful eating espoused by Green Leaf is good for everyone, at least occasionally. S