Food Review: Greek on Cary Renovates and Brings a Full Menu to the Table 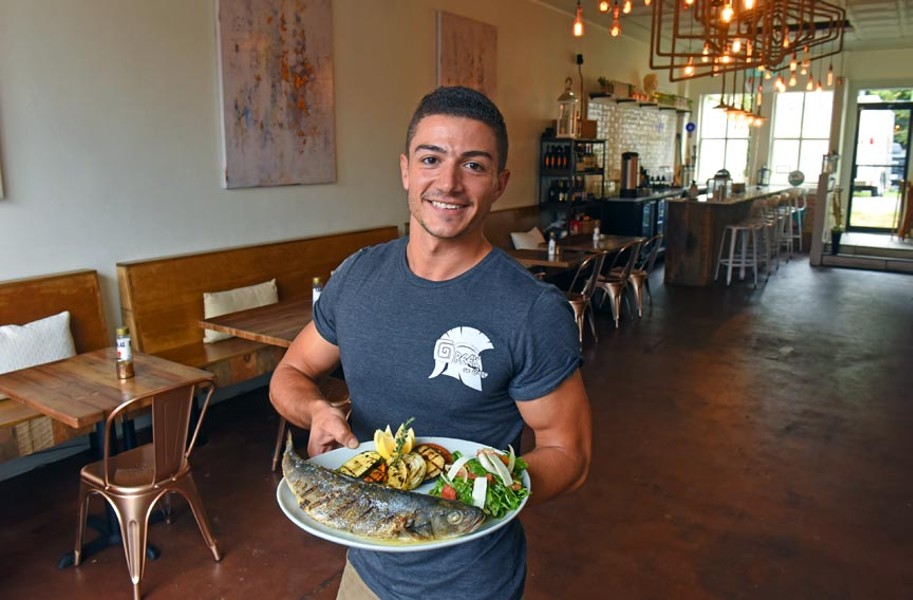 Of all the decorating choices made at Greek on Cary, the most startling is the back wall of the restaurant.

Like countless Richmond spots, it's a long, narrow building with high ceilings. Unlike any other that comes to mind, the back wall that's beside the alley is glass. The southern sunlight that streams through that glass wall makes for a restaurant with all the whitewash and airy ambiance of a Greece postcard.

Just about everyone I know had been to Greek on Cary when it was a casual takeout joint. None of them was aware that the owners renovated the building next door to create a rustic dining room with a rope-covered chandelier, wooden tables with bronze chairs and all the sunlight you can handle. A classic Greek bust surveys the dining room from its perch on a shelf above the bar.

Part of the street theater of eating in the dining room is watching the Carytown hordes walk by, glance in and immediately look up to try to identify the restaurant. The joke's on them, because despite the expansion, the Greek on Cary sign still hangs over the original space and not the new one. It makes sense since you enter through that door — but it also throws people off. It's as if they're catching a glimpse at a hidden gem.

And the restaurant sort of is. Over the course of three visits, I found a lot to like about the food coming out of the kitchen. Each time, the dining room was at or near capacity, making for a lively feel, if not always an easy room in which to chat, given the hard surfaces and noise.

Pikilia ($13), a sampler of meze, arrives on a copper tray and offers an introduction to Greek eating with not a weak note in the bunch. Delicate lemon flavor ensures that we make short work of warm dolmas, while spanakopita and tiropita are fried in phyllo dough. Generous dishes of hummus and tzatziki accompany a chopped chickpea salad, a bowl of fat kalamata olives and a hefty wedge of Dodonis feta. "It's the best feta on earth," our cheery server announces. We're sold.

This time of year, it's hard to escape zucchini, but there's no reason to when it's the centerpiece of zucchini fritters ($8). Flat and fried to a golden brown, then topped with scallions and dill, they are the stuff of fork fights. For those preferring their vegetables without a bread filler, stacked oak-grilled veggies ($8) show off the bounty of the season — tomato, squash, onion and, yes, zucchini — under a fig glaze for a touch of sweetness to balance the savory. For good measure, a chunk of the world's best feta rides shotgun.

There can be no excuse for a Greek restaurant to fail to impress with fresh fish, and grilled whole branzino ($27) does just that, the meat moist and seasoned skin crisp. For sheer spectacle, it's tough to top the saganaki burger ($13.50), which is brought to the table so the kefalograviera, a hard Greek cheese covering the burger, can be lighted in front of us. Only when the flame goes out does our server return to the kitchen for the accompanying bun and accouterments.

The homey dish moussaka ($14) would make a Greek mother proud given its layers of eggplant, potato and zucchini with a spiced meat filling. Baked with a nutmeg-accented béchamel sauce on top that's responsible for the irresistibly crispy bits along the edge of the ramekin, it satisfies on many levels. Ditto the vegetarian version.

A business that was founded on takeout gyros isn't going to let its banner slip, and the chicken version ($8) is as solid as it ever was, the dark and light chicken meat cooked on a rotisserie for best flavor and authenticity.

Greek on Cary feels family-owned, from the kitchen calling out greetings to new arrivals to the solicitous staff eager to ensure a successful meal for every guest. When a refrigeration issue causes an unusually long wait for our order, our server keeps us updated and apologizes sincerely. "Thanks for hanging in there and not walking out," he says.

You could do a lot worse than waiting for good Greek eats at this sunny gem on the alley. S